What to Watch: Angling for Fall Floor Space

Coat departments will be crowded this fall with designer labels and other brands going after the $2.1 billion U.S. market. 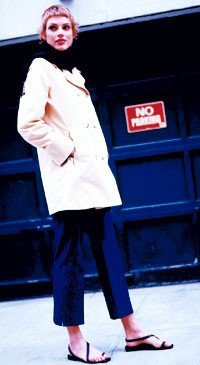 NEW YORK — Coat departments will be crowded this fall with designer labels and other brands that are going after the $2.1 billion U.S. coat market.

Through a new licensing deal, Marvin Richards will introduce Calvin Klein Collection and Calvin Klein Coats. Designer William Calvert has whipped up Perry Ellis and Perry Ellis Portfolio outerwear, which is licensed to the Utex Fashion Group; Ellen Tracy has tapped the Winlit Group here for a line of wool coats, and Pirelli is making inroads in the U.S. with its P. Zone label. S. Rothschild & Co. will launch DKNY coats, Herman Kay is unveiling Michael Michael Kors outerwear and Cole Haan is adding luxe coats to its mix. The aim is to chase fashion-conscious shoppers who might not typically shop in a coat department.

Lesser-known labels are angling to make their presence known, too. For the first time, Cinzia Rocca shot its fall advertising campaign in the U.S. and hopes that will enhance domestic fall orders, which have already increased 40 percent this year compared with 2003, said managing director Denise Bongiorno. She declined to give specifics, but in 2002 the brand sold 60,000 units in the U.S. For the fall ad campaign, it will spend 30 percent more than last fall and will add billboards.

“The campaign is more targeted for the U.S. market. It’s more directional and stronger,” Bongiorno said.

The company is also trying to tie together its magazine partners with its retail partners for special events such as trunk shows. Having the company’s namesake visit U.S. stores last year helped the brand get a much bigger presence in stores and helped establish it, Bongiorno said.

The Weatherproof Garment Co. will use “Sex and the City” star Kristin Davis in its fall advertising campaign for the third consecutive season. The company’s president and chief executive officer, Fredric Stollmack, said consumers have been responding to Davis’ squeaky clean image, by buying coats she modeled.

On the retail side of its business, Searle, which has seven freestanding stores, is renovating its shops at 1051 Third Avenue, 1296 Third Avenue and 805 Madison Avenue here, said Rick Weinstein, director of sales and marketing. The 1051 Third Avenue location is also being expanded by half a city block, he said. In terms of product, the company is buying more from collections that are performing well, such as Christopher Fischer, Just Cavalli by Roberto Cavalli, Moncler and Postcard.

On the wholesale side of its business, Searle is offering more novelty than ever in order to target “the more fit, fashion-forward customer,” Weinstein said.

“This season the newness will be found both in silhouette as well as fabrication, including a wonderful combination of color, prints and textures,” he said. “We are giving them a great deal to choose from for a market that is underserved.”

London Fog is trying to rev up its image and its $200 million business with a more fashion-forward focus for fall. The company will unveil London Fog Manhattan for city dwellers, London Fog Sport for the SUV crowd, and London Fog Sandringham for luxe-minded consumers.

The strategy is intended to offer a wider range of price points and attract customers beyond its core base. A double-digit percentage gain is planned for this year in its women’s business, said Richard McCaffery, president of London Fog. The company has tripled its advertising budget from last year, but most of that increase will be dedicated to in-store signage.

At L.L. Bean, there is a greater emphasis on casual fall outerwear such as jackets in corduroy, washable wool, wool and cashmere, twill, denim, canvas, microfiber, fleece and down, a company spokeswoman said. The company continues to see a lot of interest in knee-length coats.