What to Watch: Calvin Klein Courts Next Generation

NEW YORK — The Calvin Klein Underwear franchise continues to evolve and reinvent itself in the U.S. and abroad.

As part of the $573 million intimate apparel division of The Warnaco Group, Calvin Klein Underwear for women and men generated... 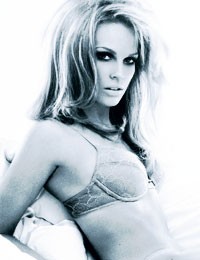 NEW YORK — The Calvin Klein Underwear franchise continues to evolve and reinvent itself in the U.S. and abroad.

As part of the $573 million intimate apparel division of The Warnaco Group, Calvin Klein Underwear for women and men generated wholesale revenues of $280 million in fiscal 2003, versus $239.7 million the prior year. And in the first quarter of fiscal 2004, the designer underwear brand posted $74 million worldwide in wholesale revenues.

It’s only a matter of time before two major launches this month will bolster sales for Calvin Klein Underwear for the second half of the year, according to industry observers.

Choice Calvin Klein is aimed at the hip, fashion-conscious 14- to 22-year-old consumer who wants affordable lingerie that has the distinct look of Calvin Klein undies, and Calvin Klein Sensual Support is an intimate apparel collection that offers support and control without forsaking fashion.

In the past, Klein’s ads traditionally pushed the envelope with steamy images, including one of a topless Christy Turlington in a pair of Klein undies or a hunky male model with his legs spread-eagle in his Klein skivvies. But now, although the message is still sexy, it has a softer, modern edge.

Lending a celebrity cachet to the launch of Sensual Support will be Academy Award winner Hilary Swank, whom Calvin Klein Inc. has cast for print, outdoor and other media for the global introduction. The impact of a Hollywood star of Swank’s stature in the Calvin Klein innerwear ads could beef up total annual sales by more than $25 million the first full year, according to industry executives.

Joseph Gromek, president and chief executive officer of Warnaco, told investors in June that he expects the new Choice Calvin Klein label to generate $10 million in wholesale revenues in the first six months of the operation, and that the annual revenues for Choice are projected to be about one-third, or some $23 million, of the yearly volume of the Calvin Klein women’s underwear business, which is about $70 million.

Finally, there’s the push since 2001 to create a global network of freestanding Calvin Klein Underwear stores, but the initiative has been accelerated since Gromek joined Warnaco, said Deborah Abraham, Warnaco’s corporate director of investor relations. A total of 60 units are expected to be open by year-end, and the bulk of the offerings will be exclusive styles for women and men, as well as a fragrance.

“We presently have in excess of 45 units,” said Abraham. “We have an infrastructure in Europe, Hong Kong and China where we own the [retail] efforts. We franchise in other places, such as Taiwan and Japan. In Japan, we partner and expect to have 18 shops-in-shops and three freestanding stores by the end of 2004.” She would not give a sales projection, but noted, “The stores tend to be between 500 and 800 square feet, selling both women’s and men’s products. In Hong Kong, we have 11 units with operating margins in the mid-high 20 percent range.”

The first freestanding Calvin Klein Underwear boutique in New York opened at 104 Prince Street in December, followed by a second unit this month at The Shops at Columbus Circle. The two New York units are owned and operated under an agreement between Warnaco and Blue Vibes, a multinational organization with retail interests.

Meanwhile, expanding its retail operations into mainland China, Calvin Klein Underwear launched its newest outlet June 19 on the third floor of Shanghai’s plush Plaza 66 shopping mall, with a formal fashion show that attracted 300 people. Plaza 66 is also home to stores including Chanel, Louis Vuitton, Cartier and BCBG. Located at 1266 Nanjing Road West, Plaza 66 joins the nearby Portman Center, Citic Square and Westgate Mall to form a strip of some of the most premium luxury retail space in China.

The 800-square-foot Calvin Klein Underwear store offers a selection of women’s and men’s underwear. Two other units in China are both in Shanghai: one at Times Square, a high-end brand mall on Huaihai Road East, and another at Grand Gateway, a mid-range mall in the Xujiahui district that is also home to one of the four outlets for Calvin Klein Jeans in Shanghai.

Klein is widely recognized in China, tapping into young white collar customers’ desire for hip, affordable active looks and underwear. But counterfeit goods are ubiquitous, with women’s underwear selling as low as 50 cents a pair. Surprisingly, the selection sold by street and subway vendors is often more varied than styles sold in the trademark stores.

Calvin Klein Underwear also distributes through a network of 11 sales counters in department stores around China, including seven in Beijing.

“We fully expect to open additional stores throughout China over the next several years,” said Stanley Silverstein, senior vice president of corporate development and chief administrative officer at Warnaco. “We feel very privileged to participate in the dynamic growth and commercial success of China.”

— With contributions from Lisa Movius, Shanghai