Baccarat, Lalique and Bernardaud are among the venerable firms polishing up their sales by putting an increased focus on jewelry. 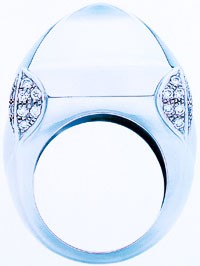 French crystal, silver and porcelain firms are bringing a lot more than just plates and cutlery to the table.

Baccarat, Lalique and Bernardaud are among the venerable firms polishing up their sales by putting an increased focus on jewelry. French silversmith Christofle will soon join the fray with a line created by industrial design guru Andrée Putman.

Tableware brands are leveraging the category to reach a younger clientele and refresh the industry’s staid image, making this a trend to watch.

“The jewelry division has made the brand more feminine and more accessible,” said Thierry Oriez, deputy general manager at Baccarat. “It has helped develop sales and broaden our customer base to reach predominately young women who purchase pieces for themselves.”

Founded in 1764, the Paris-based crystal firm has been actively developing its jewelry division since 1993, launching two collections each year. Baccarat’s jewelry collection represented 26 percent of its 2003 sales, which were about $136 million. Prices are converted from the euro at current exchange rates.

Oriez added that the jewelry line has also given the firm invaluable exposure in new distribution channels, including prime exposure on the main floors of department stores.

Brand exposure is just what the doctor ordered for the luxury tableware industry, which has suffered from a progressive drop in sales in recent years. Baccarat’s 2003 revenues slumped 13 percent, for example. Several high-end porcelain firms are also struggling to stay afloat. Limoges-based Haviland and Paris-based Daum are in the French equivalent of Chapter 11 bankruptcy protection.

Changes in social habits mean today’s cupboards are more likely to be stocked with Ikea bargains than luxury porcelain and crystal. Competition from low-cost Chinese makers and a strong euro have also hampered the industry.

To wit: Bernardaud, another high-end porcelain maker, added jewelry to its collection in 1999 in order to boost sales. The collection represented 8 percent of 2003 sales, which totaled $55.4 million. The firm is said to be aiming to make jewelry account for up to a quarter of its volume.

Jewelry has become an accessible entry point for consumers wishing to buy into a brand’s universe without the expense of purchasing an entire dinner service.

“We have expanded our customer base and have attracted a younger clientele [with the jewelry line],” said Olivier Mauny, Lalique’s general manager.

The French crystal firm aims to build on its jewelry business at the wholesale level, as well as its 70 stores worldwide. Today, the category represents 20 percent of Lalique’s annual sales, and more than 250,000 pieces, ranging in price from about $93 to $1,855, were sold last year.

“Cabochon” [unfaceted] crystal rings were first created in 1931 and are now available in 14 different colors for $198; they are currently one of the brand’s bestsellers, with about 15,000 pieces sold last year.

Meanwhile, Christofle’s collaboration with design diva Putman is the brand’s first foray into the category.

“It’s a modern concept that complements our core profession,” said François Baufumé, Christofle’s president. Christofle and Putman previously teamed up to launch a tableware line called Vertigo. The jewelry will bear the same name. “The Vertigo platters were beautiful and very popular. It’s only logical to continue and develop this concept,” said Baufumé. Suggested retail prices will range between $111 and $495 for the six or seven different pieces that will make up the jewelry collection. — Emilie Marsh

Big, bigger, biggest — for a while, that was the mantra for many watch firms hoping to emulate the trend set by successful watchmakers such as Panerai and IWC. But with ladylike looks faring strongly for the fall season, many companies are introducing tiny watch cases in thin, narrow straps — not unlike those worn by stylish women back in the Twenties, Thirties and Forties.

Among the players are Concord, which just introduced the Soiree watch, an 18-karat white gold timepiece available with a diamond-set bezel and cube bracelet or a mesh bracelet; Jaeger-LeCoultre, which is launching a small rectangular-case Joaillerie Etrier watch adorned with baguette-cut diamonds on a satin strap, and Corum’s Debutante watch, which comes on stackable, interchangeable citrine, blue topaz and pink sapphire bands. Tiffany & Co., meanwhile, launched a collection of diamond cocktail watches in 18-karat white gold for fall.

“We see a return to sophisticated style and elegance, but still understated and refined,” said Concord’s president, Fred Reffsin.

Expect the cocktail watch trend to be picked up by more moderate department store watch brands in the next 12 months. — M.K.

Harry Winston and Carolee, virtually American institutions, expect that their new management will deliver healthy results in the second half.

When he was appointed last April, O’Neill said the focus will be on the upper end of the market. And his expertise in the Far East will arguably help the jeweler establish itself in the hot Chinese market.

“So many jewelry houses have gone a different route and de-emphasized the fine jewelry end of the business for a variety of reasons,” said O’Neill. “But at Harry Winston, the focus is on what has made the company great in the first place — the finest gemstones paired with innovative design. There are over 150,000 designs in the archives, only a fraction of which have been used.”

Carolee, which has been owned by Retail Brand Alliance since July 2001, is facing a future without its namesake founder and designer, Carolee Friedlander. Mark Shulman, chief operating officer of RBA, is adding the responsibilities of president of Carolee when Friedlander officially departs at the end of this month. Friedlander is confident the company will continue moving along at a healthy clip without her stewardship.

“To leave when I am is ideal,” said Friedlander, who founded the company in 1974. “The company has been racking up double-digit increases for the past year. If they can continue with the ‘genetic code’ I have instilled, it should do fine. I built my team over 15 to 20 years. I certainly expect them [to] continue on successfully.” — Marc Karimzadeh

If Dutch artist Johannes Vermeer lived today, there’s a good chance he would have plenty of muses to pick from should he decide to paint another girl with a pearl earring. Pearls are the newest revival trend to hit the accessories and fine jewelry sectors. But this time around, they are being done in new styles that are far from the conservative single-strand standard issue.

David Yurman received an enthusiastic response from buyers when he introduced his first pearls collection at Baselworld in April. The collection features necklaces, bracelets, rings and earrings made with fine South Sea pearls and combined with 18-karat gold, silver and diamonds. There are also one-of-a-kind pieces. Retail prices range from $1,000 to as much as $250,000.

Mikimoto, which has specialized in pearls since it was established 110 years ago, recently took on European designers for the first time. As a result, colored pearls and interchangeable pearls have become large parts of the collection.

Pearls in varied shades also play a role in John Hardy’s Cinta collection. A round golden pearl is set in an 18-karat yellow gold ring and surrounded by more than 3 carats of faceted natural zirconium and more than 4 carats of canary brilliant-cut diamonds. Pendant and bracelets in mother-of-pearl also have popped up throughout the line.

Perhaps the strongest push for pearls is being driven by Tiffany, which will open 20 stores over five years under the Iridesse name. The wholly owned subsidiary will focus on pearls and pearl jewelry, the company said, with the first boutique set to open at the Tysons Galleria Mall in McLean, Va., this fall. Pearls from South Sea and Tahitian to Akoya and freshwater will be offered in a variety of shapes, colors, sizes and strands. — Emily Holt