What to Watch: Getting a Jump on B-T-S

NEW YORK — When teens head to the malls later this summer to begin their back-to-school shopping, they’ll be met with a number of higher-priced lines from familiar jeans vendors.

Those lines will draw heavily on the Eighties for... 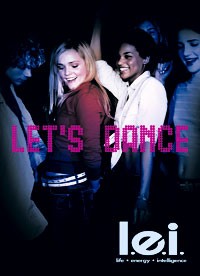 NEW YORK — When teens head to the malls later this summer to begin their back-to-school shopping, they’ll be met with a number of higher-priced lines from familiar jeans vendors.

Those lines will draw heavily on the Eighties for inspiration, offering narrow leg shapes and vintage-looking washes. Brands including DKNY Jeans and L.E.I. are preparing high-end collections for fall.

“Premium denim was recently introduced and it’s been very successful,” said Susan Davidson, president of DKNY Jeans & Juniors. “It’s at a higher price point and consists of fashion styles created with high-end imported denim. We use really great fabrics, like ‘ring ring’ denims and left-hand twill denim, which has a soft, worn-in, vintage hand and responds well to washes and treatments, like tacking.”

With the regular DKNY Jeans line ranging in retail prices from $49 to $59 in the denim collection, the new premium denim line sells for $79 to $89.

In a similar move, L.E.I., which is owned by Jones Apparel Group, is planning to launch two denim collections for the season. The lines will carry a higher range of price points, as well as a more high-end look. The first, which just hit at retail, is called E Denim, with targeted retail prices of about $48 — about $20 higher than the typical promotion price on L.E.I. jeans. The brand will follow up in late September with a second line called L.E.I. Premium, with a targeted price of around $39.

While these lines are still far from the $120 jeans sold by Seven For All Mankind, they are still considered premium to a teen customer who typically buys jeans retailing for $29.99.