What to Watch: In the Stars … Building Better Bags … The Euro Challenge … 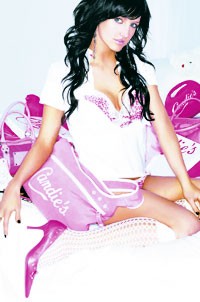 With her red-hot reputation, it’s unlikely Lohan needs the money (though perhaps she could use some good press after the highly publicized arrests of her father). As for Simpson, the campaign could give her singing career a well-needed boost. It’s clear what the girls want, but what are the brands aiming for?

“Actresses give a very different energy than models do; they relate to the customer we’re trying to reach,” said Peter Dooney, president and head designer of Dooney & Bourke. “[Celebrities] become part of people’s lives almost.”

For the brand’s first collection of “It” bags last year, the company chose Mischa Barton from “The O.C.” as the face of its print ads. Lohan’s ads appear exclusively in the August issue of Teen Vogue (which, like WWD, is owned by Advance Publications Inc.), and nearly a dozen different images will run in national publications in September.

Candie’s has a history of using of-the-moment stars in its ads, most notably Jenny McCarthy and Kelly Clarkson.

Its new campaign set for a September launch features Ashlee Simpson, who has her debut album “Autobiography” coming out later this month and her own reality show on MTV.

The partnership is mutually beneficial, as Candie’s is able to incorporate samplings of Simpson’s upcoming CD as a gift-with-purchase and can sponsor any future concerts or appearances.

Deciding to court Simpson for the project was easy, said Marder. “We started hearing a buzz about her, MTV is really behind her, and that’s perfect for our customer.” — Emily Holt

American sportswear designers have gone mad for the better-priced apparel business. Watch for the mania to sweep over into their accessories divisions, too, and shift the dynamics on department stores’ main floors nationwide.

Since space is restricted and highly competitive, these designer secondary lines are likely to put a squeeze on the more moderate areas, and players such as Nine West and Liz Claiborne should watch this development closely.

Next month, Michael Kors’ better-priced Michael accessories collection will hit main floors at stores such as Bloomingdale’s, Marshall Field’s, Macy’s and Lord & Taylor at price points that compete with the likes of Coach and Dooney & Bourke.

“The timing for this business is very good,” said Anna Bakst, president of Michael Kors accessories. “Department stores are trading up in the accessories arena. The woman is paying more for handbags than before.” — Marc Karimzadeh

The strength of the euro against the dollar has forced a number of American accessories companies that source leather and other materials out of Europe to reduce their margins. The U.S. economy is slowly improving, leaving firms to breathe a small sigh of relief, but how much longer will they need to absorb the brunt of their costs?

In the last six months the dollar has fallen nearly 2.3 percent against the euro, trading at 1.24 euros to the dollar on Friday.

Some companies decided to raise prices early, including luxury house Louis Vuitton, which increased its retail prices in the U.S. by 6 percent last February in response to the soft dollar.

Despite the fact that it’s been able to diffuse costs by using factories in South America, Cole Haan raised its prices by 5 percent earlier this year. For now, prices are holding steady, and chairman and chief executive officer Matthew Rubel doesn’t foresee another increase being necessary. In fact, he has witnessed greater cooperation than ever from Italian factories as they strive to keep American customers and maintain their country’s market share as the leather goods leader.

But for the majority of American leather goods firms, the struggle is “keeping the company afloat and keeping the name well respected,” said Cezar Mizrahi, president of handbag firm Perlina. The company has begun to rely less on Italian factories for its bread-and-butter styles, which are now made in Asia. Instead, Mizrahi reserves his Italian resources and budget for fashion styles like crocodile embossed leather.

Overall, firms plan to continue to abide by the grin-and-bear-it approach they’ve adopted thus far and absorb costs until the dollar gets stronger. It worked for Lambertson Truex, which lowered its margins in order to not raise prices — the firm saw its wholesale orders jump 50 percent during the resort market.

So while it can’t be said whether or not the worst has past, Lambertson Truex’s president and chief operating officer Michele Ateyeh said, “The exchange rate has stabilized at the lowest point that it has been at for a while, which is a huge reward for hanging in there. There’s a lot less panic that it’s going to jump to 1.28 again.” — E.H.

New York is known for its districts — Garment, Meatpacking and Flower, to name a few. But a new one could be on the rise — the Accessories District. Several boutiques selling handbags, jewelry, hats and shoes have cropped up downtown, especially in NoLIta. The neighborhood has a European vibe that attracted stores like Sigerson Morrison and Me & Ro years ago, and more recently independent designers such as French handbag brand Jack Gomme and British lifestyle store Cath Kidston.

Leave the corporate behemoths like Banana Republic and Louis Vuitton to spread across SoHo; NoLIta attracts young, lesser-known companies with an independent spirit. In May, Londoner Kidston opened her first U.S. store on Mulberry Street and instantly imported her country style. The two-level shop sells nearly everything but a kitchen sink, including cabbage-rose printed totes, aprons, serving trays, vintage jewelry and children’s toys.

Further west, designers are setting up shop in the Meatpacking District. Jewelry company Ten Thousand Things is set to move from its 19th Street location in Chelsea over to 423 W. 14th Street later this summer. Leather goods brand Henry Beguelin opened its doors below the Hotel Gansevoort on Ninth Avenue in April. Handcrafted shoes, handbags and even home furnishings are up for grabs, and the crocodile-embossed brown leather floor is reason enough to pay a visit.
— E.H.