What to Watch: Lingerie Liaisons Pick Up Steam

The question that’s got every innerwear manufacturer’s tongue wagging is who will be the next celebrity on the lingerie bandwagon. 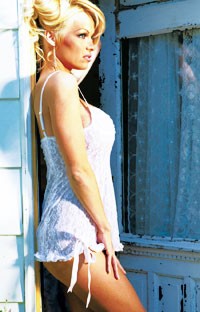 NEW YORK — Who will be the next celebrity on the lingerie bandwagon?

There’s also the proverbial roundup of prominent ready-to-wear designers who have acknowledged they are on the prowl for a licensing deal, including Vera Wang, Cynthia Rowley, Badgley Mischka and Alice Roi. Wang is said to be in discussions with two suitors — the Warnaco Group, the $1.37 billion diversified apparel firm, and The Komar Co., a sleepwear specialist with annual wholesale revenues of over $100 million, according to industry estimates. Anna Sui got a jump-start and did it her way — a “collaboration” with Los Angeles lingerie firm Underglam, which produces intimates bearing an Anna Sui for Underglam label.

This infatuation with lingerie follows the blockbuster licensing pact in November 2003 between Sweetface Fashion Co., the masterbrand firm for Jennifer Lopez, and Warnaco to produce JLo Lingerie by Jennifer Lopez. Shipments to major department stores are slated in late July. All of this hullabaloo was quickly followed by TV beach-babe Pamela Anderson, whose master licensor, United Licensing Group, signed a pact in January with Vandale Industries to produce a line of bras and panties, corsetry with garters and daywear items like baby-doll-looking camis bearing the Pamela Anderson Intimates label. Anderson’s undergarments will be in department and specialty stores at the end of September.

“Next to bikinis and T-shirts, I definitely love lingerie,” said Anderson in a phone interview. “I’ve always been in search for a perfect pair of panties. I give a lot of input on the design of G-strings and bras. I’m really a very hands-on type of girl, more so than anyone had thought or hoped for. That’s been part of the drama of it all.”

“I can’t stand underwire bras. But we [Vandale] found a way with triangle-shaped and demi-cup bras that have support, that are more comfortable, and fit more shapes and sizes for larger-breasted women who want pretty bras — you know, not bras for grandmas.”

The word in the industry is that celebrities as well as designers want licensees that generate megabucks — at least $40 million in wholesale sales the first year — and that the most logical channel of distribution is mass merchants such as Wal-Mart, Kmart and Target, as well as national chains such as Mervyn’s, J.C. Penney and Sears Roebuck & Co.

Richard Leeds, chairman of Richard Leeds International, an innerwear firm specializing in licensed characters with estimated wholesale revenues in excess of $125 million, said: “I’m interested in doing a Paris Hilton line. After all, we do a lot of work with Bentonville, Ark.-based Wal-Mart, and Hilton hangs out in Arkansas in her TV show. They must have something in common.”