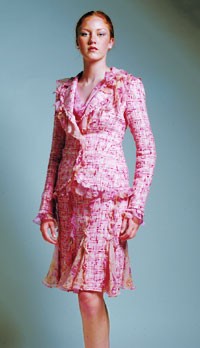 Riding a six-month stint of better than 30 percent sales growth and the best sell-throughs in company history, Teri Jon is still missing one thing: name recognition.

But the 24-year-old bridge line plans to remedy that with a major brand-building effort. The brand has done little previous advertising, but has budgeted up to 5 percent of its annual volume, which was around $22 million in 2003, for a new print campaign. Starting in September, the campaign will reach national consumer publications such as In Style and Vanity Fair, and will also appear in local magazines in New York, Los Angeles and Las Vegas. The campaign was produced and shot in an in-house studio, under the control of designer and founder Rickie Freeman.

“I wanted nothing to distract from the product and the personal image,” she said. “The product isn’t hiding behind a mood or atmosphere. I want consumers to be able to take the ad to the store as something they want to buy.”

Along with advertising, Freeman, 52, hopes to broaden her audience by “modernizing” the line, she said, updating it to suit the changing needs of her Baby Boomer target customer.

“The world is on a youth kick, but we’re building a niche with Baby Boomers, the silent majority,” said Freeman. “As our customers get older, they want to look younger, and none of them think of themselves as old ladies. We have to stay tasteful, with nothing trashy, no 12-inch skirts or low-rise pants.”

Saks Fifth Avenue, one of Teri Jon’s 850 accounts, is helping in the branding process. Saks will open its second 400-square-foot Teri Jon in-store shop in its Beverly Hills unit next month, following the debut of the first shop last September in the Manhattan flagship.

“We believe strongly in the trend direction of Teri Jon,” said Bill Lynch, senior vice president of merchandising, who added that Teri Jon has been strong since last fall, growing from a small portion of sales to Saks’ second-largest dress line. “This line is evolving, along with customers, from classic to more modern.”

The more versatile approach was also the inspiration for the company’s sportswear division, Jon, introduced three years ago. The line is more whimsical and younger in spirit. Jackets, skirts and pants are intended to be dressed up or down, depending on the occasion, and skirts offer a range of hem lengths.

Ad photos for Jon reflect its image. In one, a model wears a coat with nothing underneath it except a pair of jeans. Wholesale prices range from $185 to $250.

With prices having jumped in the range of 5 to 10 percent for many European designer brands over the past year, some players are approaching the fall retail season with trepidation, while others are taking proactive measures to avoid any consumer resistance.

Escada, which has had its share of troubles in the past few years as it seeks to modernize its product while cutting operational costs, is launching a collection aimed at young working women, with slightly lower price points and tamer fashions than its splashy runway signature collection. The new line, delineated by a burgundy label, is being referred to internally at the company as the “Escada Business Collection” or “Bordeaux Label.”

Meinrad Plakolm, a former designer for Jil Sander and Strenesse, is designing the line in collaboration with Brian Rennie, Escada’s design director. The new line will feature three deliveries each season, multiple color and fabric options per style and prices about 20 percent lower than the main collection. Jackets range from $950 to $3,500 at retail, pants from $400 to $550 and skirts from $400 to $1,300.

“Escada has always had a strong demand for suiting in its main line,” said Lawrence C. DeParis, president and chief operating officer of Escada USA. “With the Escada Business Collection, we are able to offer existing and new customers alike diverse executive dressing options that exude confidence for their professional lives.”

The new line has been picked up by Neiman Marcus and Saks Fifth Avenue and will be carried at Escada’s own stores around the country; in its first season the Escada Business Collection will account for more than 10 percent of retailers’ overall buy from the vendor.