What to Watch: Up-and-Comers Ready for Action

The Old Guard dominates the ready-to-wear business, but a crop of younger, lower-profile designers are making names for themselves. 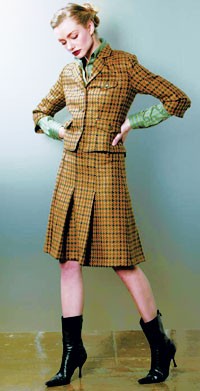 NEW YORK — The Old Guard dominates the ready-to-wear business but a crop of younger, lower-profile designers are making names for themselves.

Bill Blass, Badgley Mischka, Carolina Herrera and Oscar de la Renta set the bar for the category, though a younger flair has been added to their designs. Bob Mackie Studio is showing off its collection of moderate dresses that will be in stores next spring, and Oleg Cassini has broadened his bridal collection with an upscale line. Nicole Miller and Kay Unger want to attract additional customers with new home collections being sold at Bed Bath & Beyond.

British designer Alice Temperley plans to spend more time here in the SoHo store and showroom she opened last year. With a concept store at Henri Bendel, the designer is building a loyal following for her super girly dresses and eveningwear. Temperley is said to be lining up licensing deals to broaden her reach with a wider arrangement of products.

Eveningwear designer Carmen Marc Valvo is dabbling in the bridal market with a “demi-bridal collection” for brides who want designer gowns without the typical six-month wait. With retail prices of $900 to $1,400, the gowns have hand-beading, ribbon embroidery and fabrics such as ruched silk chiffon and taffeta. The designer whipped up an ivory-colored pleated silk chiffon dress for Veronika Varekova, this year’s cover girl for the Sports Illustrated swimsuit edition. The model planned to wear the gown for her wedding reception the weekend of July 4, but not for the ceremony.

As for the up-and-comers, Walter Baker, the designer behind the Walter label, expects to open a store in the Meatpacking District or in another lower Manhattan spot in September. His first fashion show will also be staged around that time to coincide with the opening, a spokeswoman said.

Baker, who made his first in-store appearance at Bergdorf Goodman in April, plans to do more special appearances in the next six months. This fall, the designer is focused on cropped bouclé jackets, sexy silk charmeuse tops and pencil skirts, colorful chiffon prints, chic tweed suits and wool herringbone coats, among other things.

After starting out in tenniswear, Bumi Sirotka, co-owner and vice president of design, is branching out to ready-to-wear this fall. Dresses, cashmere pieces, ribbed vests and cotton embroidered pants are among the offerings intended for specialty and department stores and high-end resorts. The designer said she plans to add more “office-acceptable pieces,” such as fitted jackets, in the next season or two.

Winter Hodges, president of Bumi Sirotka and a silent investor, will launch another rtw collection, Winter & Miggs. Buyers will get a look at the line, which will wholesale from $28 to $200, this fall.

Tori Richard, a Hawaii-based company known for its resortwear, is trying to make a comeback by reintroducing dresses and separates in vintage fabrics with bold and dramatic prints.

Chomwan Weeraworawit, a Paris-based law student and part-time designer, will unveil her first Thai-inspired collection in the fall in New York. She plans to devote all her time to her signature design business once she gets a master’s degree from the Sorbonne. Weeraworawit has been getting some attention for the uniforms she designed for the waiters and waitresses at Kittichai.

Hye-Jin Hwang is another newcomer to the rtw scene and her signature collection debuts in stores this fall. Having worked in interior, graphic and fashion design, she is putting her know-how to use with her label, Gam In Gale.

Despite working full-time for Cynthia Rowley, Prabal Gurung has started his own business. Dresses wholesale for about $200, jackets are around $300 and tops are $90 to $150.