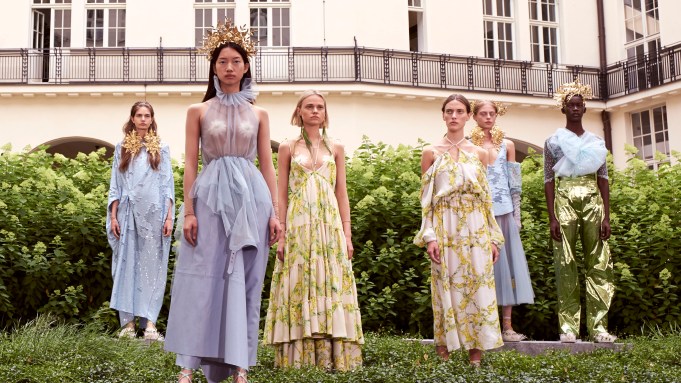 BERLIN — The main theme at Berlin Fashion Week this season was Berlin Fashion Week — or, rather, its future. Constant changes and a difficult German apparel market have created challenges to maintaining the city’s relevance as a fashion platform for the domestic industry.

The myriad of events, running from July 1 to 5, painted a picture that reflected the city’s ongoing struggle for direction. Besides Mercedes-Benz Fashion Week at the main venue E-Werk, multiple side events, six trade shows and an additional new business-to-consumer format, running through the weekend until July 7, again made it difficult for visitors to navigate.

The six trade shows that ran from July 2 to 4 — Panorama, Selvedge Run, Premium, Show & Order, Seek and Neonyt — saw a decline in traffic, but remained a focal point for brands eager to tap into the German market, especially for the Central European commercial and midmarket segment. Many exhibitors praised the quality of buyers in attendance, and some said they wrote important orders, and they continue to view the city’s fairs as important communication platforms. This season, sustainability was a focus throughout all the fairs (the organizers had previously gathered at the initiative of the Berlin Senate to discus the issue).

At streetwear-focused Seek, Samuel Soria — one of the founding partners of Spanish eco-eyewear company Parafina, which had previously exhibited around Europe and the U.S., but was at Seek for the first time — said while the number of buyers was low, the quality was good. “You get a lot of general public at other shows, lots of bloggers and fashion students, but here you have only quality buyers — and not just from Germany, but also northern Europe and the U.K.,” he enthused.

“The buyers here are more serious, there’s a different culture here,” added Christian Marie of Paris-based streetwear label Ldn-istan, who had returned to Berlin for a second time and captured several new accounts.

There were certainly more interesting, new niche brands to discover, a German buyer, who requested anonymity because he had yet to place orders, told WWD. He had spent time with brands he already carried and gestured around him at  companies he had never seen before, such as the unusual, padded Subu slippers from Japan, launching in Europe this year; French streetwear brand Gouache.eu, and Australian roller skate company Impala, which has collaborated with Cynthia Rowley and  L.A. personality Marawa Wamp.

At Premium, too, attendance was down compared to past seasons. While the show retained its focus on contemporary women’s wear, the number of outdoor brands increased visibly, with brands like Red Bulls’ Alpha Tauri and National Geographic presenting their collections here.

“For us, Premium is awesome,” said Marco Götz, chief executive officer of German brand Drykorn, which has over 1,800 accounts in more than 20 countries. “People have been talking about how difficult the market is for 20 years, but we are doing well, especially in Central Europe. We’re expanding in Eastern Europe, and the Russian market is recovering, too,” he continued. The company addressed the challenges of changing weather and seasonal demands by adjusting the collection and order rhythms. And while most orders are placed in the showrooms in Düsseldorf, Götz noted that it was important to be at the Berlin fair. “I believe in the trade show as a vital communication platform. We need to see each other personally to motivate each other and inspire each other,” he said.

The Mercer, a premium women’s wear line that is part of Katag AG, was present, both at Premium and with a showroom at Gendarmenmarkt during the fair days. “The brand is quite new and we were very happy with the resonance we got from the fair. We meet buyers here and send them to our showroom where many placed orders,” said a company spokesperson.

Cologne-based apparel brand Funktion Schnitt, however, opted for an individual showroom in a different location during the three-day run of the trade shows. “None of the fairs provided the adequate setting to communicate our brand values properly, but we decided to do our showroom during Berlin Fashion Week because many buyers and industry professionals are in town during the week,” said Gesa Bollmus, the company’s global brand owner.

The  trade show with real momentum was Neonyt, a merging of the Green Showroom and Ethical Fashion Show that emerged as a new platform for sustainable fashion last season. Neonyt reported its strongest number of exhibitors with more than 170. “As part of the Texpertise Network of Messe Frankfurt, we have insights into the whole supply chain that enable us to look much deeper into how sustainable production processes are,” said Magdalena Schaffrin, who founded Green Showroom ten years ago and is now creative director of the new platform. The trade show is gradually expanding sustainable matters into all parts of the supply chain and recently launched a sustainable buyers initiative. It also served as Federal Minister for Economic Cooperation and Development Gerd Müller’s platform to promote the “Grünes Siegel,” the first state certificate for sustainable fashion that is slated to launch this fall.

It’s a momentum that was evident for exhibitors as well. “Neonyt was great for us because we get orders from buyers and profit the influencers and journalists who carry our message into the world,” said a sales manager at Nuuwai, a sustainable handbag brand that uses an imitation leather made of apple waste and polyurethane.

But while the trade shows remain a stable fixture and are gaining increasing interest from governmental institutions, the fashion week program looked dimmer.

The Berliner Salon, a group exhibition of German designers that had been a highlight of Berlin Fashion Week since it launched in 2015, was discontinued, as desired business objectives were not met.

The schedule at MBFW was dominated by midmarket brands, with the exception of the flamboyant designs of this year’s winner of the Hyères Festival Christoph Rumpf and Odély Teboul’s Lou de Bètoly, who presented a strong collection inspired by Édouard Manet’s painting “Le Déjeuner sur l’herbe” and marked by her signature crochets.

Fellow mentée Nobieh Talaei, who returned to her home base with her label Nobi Talai after showing in Paris for the past few seasons, chose a minimalist 18th century reform church to show a collection of sharply tailored shapes, airy silk plissé and graphic guipure in a black-white-navy palette that mimicked the atmosphere of the venue.

Another comeback was Hugo by Hugo Boss with a party and concert to celebrate the capsule collection with singer Liam Payne, who performed at the event. While the collection was only on view on screens, sales for the capsule were launched after Payne’s performance.

Dawid Tomazewski, on the other hand, had a debut of another sort: Besides his main collection of floral summer dresses, the designer launched a collaboration with the German branch of shopping channel QVC, which might pave an alternative way for young German designers to sell (the TV network has revenues of nearly 800 million euros a year and is expanding its fashion offering).

Beyond fashion, there was big industry at Berlin Fashion Week this season as well. German tech giant Siemens chose Mercedes-Benz Fashion Week and tapped local talent Vladimir Karaleev and dancer Kiani de Valle for a performance to present the biggest single investment in the history of the company — a 600-million-euro-plan to turn the historical industrial area Siemensstadt in the northwest of the city into the world’s first industrial smart city with housing, education and research facilities, and a creative hub.

Since Mercedes-Benz parted from its original production partner IMG two years ago, there has been talk about the need for change in the German fashion scene, but so far little substantial change is in sight. Like many other “smaller” fashion weeks, Berlin has started to open up to end consumers.

For the second time, MBFW opened a public area with installations of Berlin designers in front of its main venue E-Werk. The premises also served as location for the commercial consumer-facing About You Fashion Week by the namesake German e-tailer that opened on Friday night.

Throughout the three days, the organizer staged runway shows by brands like Adidas and Dockers, a concept store with the participating brands, and red carpets with VIP guests like Coco Rocha, Karolína Kurková and local influencers such as Bonnie Strange and Tokio Hotel’s Bill Kaulitz.

Still, questions about Berlin’s fashion week future remain. “There’s so much amazing stuff in this city and it’s really a wonder how nobody has yet managed to make something out of it. There’s no point in copying a fashion week like Paris’ because Berlin is such a different microsystem. It needs a new system that is different and that really addresses this extensive creative potential,” designer Jen Gilpin of Don’t Shoot the Messenger told WWD. She, along with other designers like Michael Sontag and Vladimir Karaleev, were some of the hopefuls when Berlin Fashion Week started and have stayed away for the past seasons because of the lack of results. Many others, like Dumitrascu, GmbH or Ottolinger, have opted for Paris or New York.