"It seems like a homecoming," laughed Loulou de la Falaise as she sat down Monday evening to caviar and vodka to celebrate the opening of "Smoking Forever." 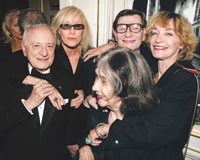 “It seems like a homecoming,” laughed Loulou de la Falaise as she sat down Monday evening to caviar and vodka to celebrate the opening of “Smoking Forever,” the exhibit at the Pierre Bergé and Yves Saint Laurent Foundation devoted to the couturier’s influential softened version of the masculine tuxedo. Indeed, it was just like old times for the Saint Laurent gang, as Betty Catroux, de la Falaise, Yves Saint Laurent, Pierre Bergé, Helene Rochas, Catherine Deneuve, Helene de Ludinghausen, Doris Brynner, Bob Wilson, Gilles Hennessy, and Hedi Slimane arrived dressed in “smokings” at 5 Avenue Marceau. Catroux — whom the designer says best epitomized the smokings subversive attitude — mischievously said her secret is “not to wear anything underneath.” “It’s so practical,” said de la Falaise. “I was dressed this evening in seven minutes flat.” Deneuve turned heads in her smoking jumpsuit. “I’ve had so many,” said the actress, complaining she’d run out of closet space, puffing on an ultrathin cigarette after trading anecdotes with Ludinghausen about her new pet pigs. Unlike Ludinghausen, who keeps hers at home in Paris, Deneuve has packed hers off to the countryside. “They follow you around everywhere,” she laughed. Meanwhile, Sir Paul Smith arrived from London with his wife, Pauline. “She’s wearing the last couture smoking,” shared Smith, a longtime devotee. “It was our little extravagance.”