NEW YORK — Jennifer Connelly isn't the only one who thinks short dresses are appropriate for black-tie affairs.

By Rosemary Feitelberg on May 10, 2005
View Slideshow 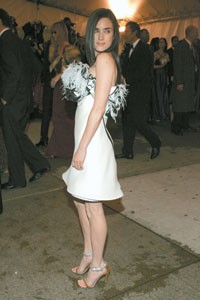 NEW YORK — Jennifer Connelly isn’t the only one who thinks short dresses are appropriate for black-tie affairs.

Evening attire could be found at resources such as Algo of Switzerland, Gene Roye, Lili Butler, Lourdes Chavez, Mark Heister and Linda Cunningham at the three-day show, which closed May 3 at the Essex House here.

Anne Friday, buyer for Razook’s stores, said, “We are definitely finding more women looking for shorter dresses as an alternative to black tie. There is a desire to get more wear out of a dress. A good, dressy short cocktail dress can go to a lot of different places.”

She ordered cocktail dresses in amethyst, mocha, green champagne, topaz, teal and chocolate brown from Kevan Hal. Referring to shoppers in Razook’s stores in Greenwich, Conn., and Raleigh and Pinehurst, N.C., she said,  “People are getting more excited about events and they are more willing to go buy something new. That hasn’t happened in a while.”

Deborah Gilbert Smith, who owns a store by the same name in Millburn, N.Y., said until recently most women owned one or two black gowns that they would wear for black-tie events. Now they are buying more novel alternatives since designers are offering more options. “There is a good selection in suiting, dresses and jackets that still look special and dressed up enough to be worthy of a special occasion.”

Gilbert Smith, whose business is showing signs of improvement, said shoppers initially begged off from buying nontraditional black-tie pieces for fear of insulting their hosts. But some guests have tired of trying to find variations of basic black gowns and are opting for more novel looks, he said.

“I will say it’s been taking longer than I thought it would for people to move in that direction,” Smith said.

Jeffrey Moss, sales director for Kevan Hall, said, “A lot of customers are going out more. I’ve seen a big change at trunk shows. A lot of women are opting to wear over-the-top cocktail dresses for black tie.”

A beaded tailored plaid shirtdress at $675 and a brown wool jersey with a low squared back at $690 were two bestsellers at Kevan Hall during the show. Consumers aren’t blinking at spending between $2,000 and $4,000 for cocktail dresses, since they know they will wear them as more than special occasion pieces, Moss said.

Like Smith, Moss said there have been signs of interest but not a full commitment. “The drift I’m getting from stores is it’s a hard niche that’s not there yet. It’s hard to find a good cocktail dress.”

Weston Imports showed off its Casa Lopez, Rossi & Caruso and Maggio & Rossetto accessories, making it the first at the show to offer accessories. Sales director John Weston said he picked up 10 to 12 new accounts at the show. One of the most popular items was the triangular-shaped handbag Casa Lopez designed for Eva Peron in 1943. More recently, the Argentina-based company has sold pieces to the queens of Spain and the Netherlands, Weston said.

Buyers at the show liked the lines’ price tags, which range from $125 to $325 wholesale.

Consumers’ price-consciousness was something that was discussed at the Averardo Bessi suite. Betty Kahn, a personal shopper, said she has noticed that people are holding back from making purchases and that they are not as compulsive as they used to be. “It seems everyone’s closets are very full. The days when they used to buy six or seven outfits are over. People are just not filling in like they used to.”