Who What Wear to Make Bid for Overseas Markets

The company is taking steps to launch its branded product internationally next year in what could help double overall sales.

A look from Who What Wear.

LOS ANGELES – Who What Wear is looking abroad for big-time growth.

The fashion web site already generates more than $100 million in sales across its commerce network in the U.S., and cofounder and chief executive officer Katherine Power thinks the business could at least double as the company lays the groundwork for a European launch next year.

“We’re going after pretty wide distribution,” Power said. “The Who What Wear brand is meant for everybody; it’s not a niche, high-end offering. So we think we have a good shot of creating that kind of volume overseas as well. It’s not going to be with one country but with many countries and many categories.”

The affordable line, launched in 2016 and sold in the U.S. in Target stores and Target.com, gained ground through its meticulous use of data to help inform designs and merchandising.

It developed and earlier this year began using a platform called Be the Buyer that allows it to more closely track the buying decisions of its target audience to help the business make smarter decisions about what it designs and releases. Users who sign up to participate, of which there are about 20,000 monthly, enter the system and are given digital currency to make “buys” or selections of sketches currently being considered for production. That’s before sometimes the Target buyers even see these designs.

A good example of how the system works: polka dots. The company used Instagram to test consumers’ response to a mock-up of a polka-dot print for one of Who What Wear’s first collections, with no real intent of using it. The response was positive and the print was added into the collection and became a bestseller. Polka dots are now used in nearly every Who What Wear release. 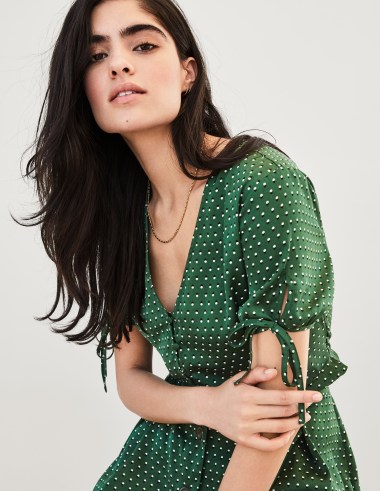 A survey of 349 individuals last year resulted in 73 percent selecting polka dots as their favorite print, with collections now incorporating some level of polka dots in each drop.  Courtesy Photo 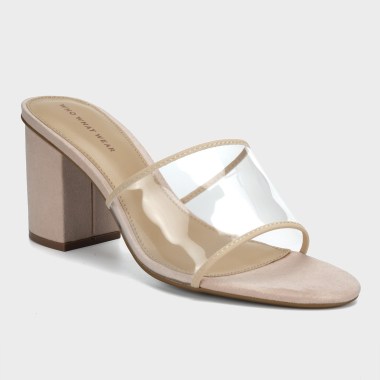 The Kalyn and Danielle heeled slide styles were the most popular among 309 people surveyed by Who What Wear prior to the styles being released. The two silhouettes have so far been top sellers this season.  Courtesy Photo

“Over time, we’re able to figure out and not only tell the buyer which designs to buy more deeply or maybe even cut before they see them based on user feedback,” Power said. “We’re also going to be learning who out of our subset [of users] is good at predicting sell-through for different retailers.”

The Who What Wear media web site already exists in the U.K., where the company also has an office. It’s now talking to prospective partners about launching its products there next year. Power said announcements on those retail deals would likely be forthcoming toward the end of the year.

“We have been putting deals in place, line plans and go-to-market strategy there so we’re really excited to take the brand there,” she said. “Our whole mission is to make style accessible to women everywhere so we’ve been able to do that in the U.S. by bringing this content that makes style very digestible…. That idea of democratizing style.”

The U.S. market has seen Who What Wear pop-ups and the strategy would be no different overseas, with continued interest in that type of distribution channel, Power said. She confirmed there are no plans for something more permanent in brick-and-mortar in the near term, but said that’s not something being completely ruled out.

“We’re really interested in pop-ups just in general because they give us an opportunity to connect with consumers in real life,” she said.

Additionally, since the sale of the Byrdie and MyDomaine businesses last year to online publisher Dotdash, the company has since re-branded from Clique Brands to Who What Wear to place greater emphasis on that brand.

“Our team is very focused on the Who What Wear business at this point,” Power said. “It is at its highest traffic levels ever,” she said, citing four out of the last five months have been its best in terms of page views and unique visits, adding, “The brand is definitely at peak popularity.”