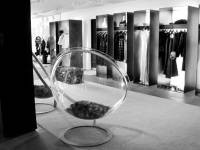 NEW YORK — The snow and the fur were flying in Aspen over the holidays, when two of Manhattan’s chic furriers — J. Mendel and Dennis Basso — opened freestanding boutiques in the Colorado mountain town.

It was a Christmas to remember for Gilles Mendel.

Sales at the designer’s new J. Mendel boutique in Aspen outperformed expectations, exceeding $250,000 in the first five days after its launch party Dec. 26., which benefited the Aspen Center for New Medicine.

The space was designed by New York-based architect David Mann of MR Architecture + Decor, with Sophie Brouzes as the designer-in-charge of the project. All three current J. Mendel boutiques and any future stores will be modeled after the Aspen location. In the U.S., J. Mendel has two New York locations — on Madison Avenue and a shop in Bergdorf Goodman. Those locations opened in 1995 and 1999, respectively. The original store on Rue St. Honoré in Paris is run by Gilles Mendel’s father and company founder Jacques Mendel.

“I chose Aspen mainly because I’m very in touch with my clients and a large majority of them spend a lot of time in Aspen,” Mendel said. “The whole idea [of the design] was to try to challenge ourselves into making the Mendel version of the future. I can’t wait to have Mendel look like Aspen all over the world.”

The store design is a play between the rawness of contemporary materials and the sumptuousness of fur, according to Mann. It features exposed concrete floors with inlaid carpet, freestanding custom-made bronze cases that hold the collection and a marble mosaic floor in the entryway, which is similar to the floor of the window display areas at the Madison Avenue location. In the main area of the floor are two lucite, plastic and aluminum bubble chairs from England that lend a hip feel.

“When I arrived, I was stunned beyond my expectation,” Mendel said. “David Mann excelled at using sophisticated materials and sophistication really relates to our brand. Everything has a modern aspect, but the store is extremely warm.”

Besides hearing quite a bit about Aspen from his clients, Mendel was approached by a local retailer to do a trunk show there. After the show’s success, Mendel scouted real estate until the East Hopkins Avenue location opened up.

The boutique offers the full fur collection, the growing rtw line and accessories. Besides the fur coats, Mendel’s goal is to offer a variety of funky items, like an Indian tunic with fur trim, for example.

“I want women to come in and fall in love with things they might not need,” said Mendel, “but because they’re so attractive they have to buy them.”

Retail space at the bottom of ski hills is usually filled with Grandoe gloves, Turtle Fur accessories and Smith goggles. But in Aspen, the question du jour among certain après-ski circles is: Why buy the synthetic stuff when it comes in fur?

That thought was the same question Dennis Basso asked be-fore opening his first boutique, inside the town’s swank hotel, The Little Nell, near the base of Aspen Mountain.

The 600-square-foot space will house the fur collection and a range of accessories expected to bring in $2.5 million in its first year. This will add approximately 15 percent to the company’s revenue, according to Basso.

The designer said the choice location inside the hotel was the determining factor for opening a store. The collection will continue to be sold in all Saks Fifth Avenue fur salons.

“We did trunk shows there for six years prior to opening the store,” said Basso, who has also vacation-ed in Aspen for the past 10 years. “And each year, the show grew in terms of revenue.”

The interior decor was executed by Kenneth Alpert of New York and features limestone floors and cream, silk-lined drawers. Built-in cabinets, closets and crown moldings are carved of sycamore wood. The store was designed by New York-based architect John Lindel.

While Basso said there are no concrete plans, opening other loc-ations is a possibility.