With global warming taking its toll, dressing for the elements is almost a daily lottery. 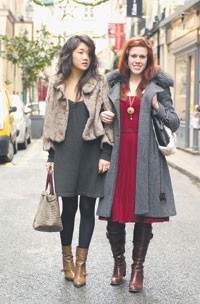 With global warming taking its toll, dressing for the elements is almost a daily lottery. Take last week: Northern Europe was rocked by gale-force winds and California saw snow, while New York, having been basking in almost summer-like temperatures earlier in the month, braced itself for the first real cold snap of winter.

Just as temperatures rose and fell, women in Paris, London, Milan and Manhattan stepped out in stylish outerwear in varying lengths. A few Parisians paired cropped, round-collared jackets with minidresses, while belted coats and brightly colored outerwear were big with the British. “I like being able to draw in at my waist. It feels less shapeless,” one Londoner explained. Young Manhattanites have also abandoned tried-and-true wool coats for more inventive pieces, while Milanese paired their lighter jackets with thicker scarves.