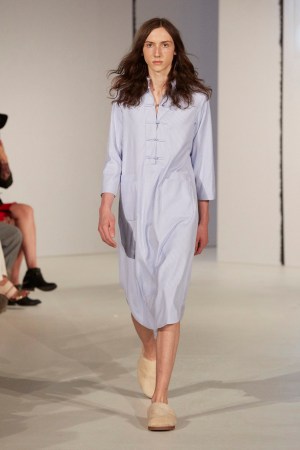 After a wild, glittering night at the disco — as explored in last season’s collection — Berlin designer William Fan now turned his attention to the morning after. This, as he noted, could mean going straight to work without sleeping or crashing back at the house. His spring lineup allows men and women to do both — often without a change of outfit. And often in exactly the same pieces, regardless of gender; just sized up or down, with only convention deciding whether one should stay at home or venture out, as in the androgynous striped cotton Chinese night shirt, which  opened the show.

The young designer — the Fashion Council Germany’s next designated “mentee” — played with home-decor materials, modeling bell-sleeved tops, blazers or pants with big, fold-over waists out of cork and wood. He used tattersall dish or table-cloth checks and a pillowy, sky-blue matelassé for in-and-out-of-bed jackets and coats. Fan also turned the tables on navy pinstripes, giving them a comfy lounge suit or après-sports air, though the pinstriped women’s pants suit was boardroom sharp, even with a fringy white lace belt.

Fan is introducing porcelain homewares and organically shaped furniture this season, so his customers can live with, as well as live in, his designs. And the good life starts at once: After the show, audience members could go backstage and take advantage of an “order now” option.