By taking the reins of Saks Fifth Avenue after running Donna Karan, Fred Wilson is jumping from one daunting assignment to another. 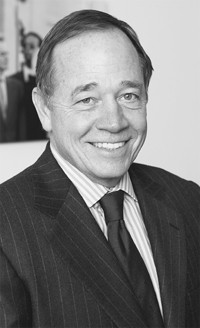 NEW YORK — By taking the reins of Saks Fifth Avenue after running Donna Karan, Fred Wilson is jumping from one daunting assignment to another.

Asked if Saks constitutes his most challenging job ever, Wilson noted he doesn’t officially start at Saks until Jan. 1 and will know better when he’s fully on board. “It certainly is a big challenge and a big opportunity. I’m excited and feel lucky to be here.”

Lucky indeed, considering Donna Karan International, where he served as chairman, president, and chief executive officer, has been losing some ground in stores, and because Saks, while grappling with issues of its own, is still among the world’s most prestigious retail nameplates. On Tuesday, the 57-year-old Wilson was named president and ceo of Saks Fifth Avenue Enterprises, confirming a WWD report on Oct. 29.

“We feel good about the luxury business. It feels better in the major metropolitan areas,” said R. Brad Martin, chairman and ceo of Saks Inc., during a conference call with retail analysts Tuesday. “Our business has been quite strong in New York, and clearly, a meaningful piece of that is from travelers. We are seeing more tourists in the big market stores and it feels better than it has in two and a half or three years.”

But there’s still lots of work ahead. Wilson is charged with polishing a brand that for years has been searching for a sharper identity and stronger customer bonds, and has been battling intensified competition primarily from Neiman Marcus, Bloomingdale’s and Nordstrom. It also has been hindered by about a dozen weak-performing SFA stores out of the chain of 62.

The task is compounded by a relatively complex organization and reporting structure. SFAE has three operating divisions, including Saks Fifth Avenue, Off-5th outlets and Saks Direct, as well as five general merchandise managers, three executive vice presidents and others that all report to the ceo.

It’s expected that with a new ceo, there will be some jiggling of the executive ranks. Wilson will be overseeing all the merchandising and marketing, at least, though certain operational and administrative functions could be delegated, sources said. He reports to Steve Sadove, vice chairman of Saks Inc., which also operates the Saks Department Store Group with 243 units.

“Fred is a proven leader and experienced merchant,” Martin said in a statement. “I have worked with Fred for several years in his various capacities at LVMH and have great respect for the substantial impact he has made on each business he has managed. He will bring a unique understanding and perspective of luxury retailing and manufacturing to our enterprise, and I am confident that SFAE will thrive under his direction and leadership.”

Wilson succeeds Christina Johnson, who left in October. Before her departure, the company conducted a search for a new chief merchant, but came up empty-handed. Candidates from other stores either had contractual restrictions or wanted to be ceo, not a chief merchant reporting to a ceo. According to Sadove and Wilson, that search has been halted, though perhaps only temporarily.

“Right now, I am the chief merchant,” Wilson asserted. “My sense is to come here and work with what is a sound and very excellent team. In due course, Steve, Brad and I will discuss [whether to revive the search.”

Although Wilson officially takes the reins at SFAE in the New Year, Sadove said it’s likely he’ll start working at least part-time before the end of the year. His impact, however, won’t really be felt until after the first half, since most of the buying up to that period was done during Johnson’s tenure.

As far as his vision for Saks, Wilson said it’s “completely aligned” with the one developed by Martin and Sadove. He left it up to Sadove to explain.

“The vision we have offering the most inviting luxury shopping experience is sound,” Sadove said. “But we need to actualize that and bring it to life. Saks is the best brand name in luxury retailing. The brand has done OK in a very tough environment over the last several seasons.”

Sadove also noted the company reported “a solid quarter” with both sales and earnings up. “We have started to make headway, the stock market is improving and people are traveling again. The luxury sector overall is doing better and is poised to accelerate our growth,” Sadove said.

Asked to elaborate on the “inviting experience” mantra, Sadove said it suggests offering “a luxury experience at multiple price points, from bridge to designer.” Asked if that means trying to be more like Neiman Marcus, Sadove responded: “No. It’s about being different from Neiman Marcus.”

Most growth will come from existing stores rather than new ones, though a few new units are contemplated, including one set for Raleigh, N.C., next year.

“It wouldn’t surprise me if we open one or two [annually] over the next several years,” Sadove noted. “That’s not where our [real] growth lies,” he added. “It’s more about increasing store productivity, better assorting and meeting local customer needs so Saks becomes a more exciting and inviting place. It’s certainly about the environment — how customers are welcomed in and how they are approached.”

Sadove cited significant opportunities for sales growth by emphasizing gifts, home, accessories, fine and fashion jewelry, shoes, contemporary and designer apparel more than in the past. “We want to be thought much more of as the place for new designers,” he added.

Meanwhile, Wilson’s immediate challenge will be to prove that he is the right guy for the job. “He has a very nontraditional background for that job so it’s very critical that he establishes some real credibility early in the game,” observed Robert Kerson, the search executive, who was formerly with Korn/Ferry but is planning to open his own search firm. Kerson was referring to the fact that Wilson has never worked at a department store like Saks Fifth Avenue.

The key to a good start, Kerson advised, is to build relationships with the major vendors. “They’ve got to rally behind him and he’s got to get his organization to respond to him very quickly so people believe he is the right guy.”

However, Hal Reiter, ceo of the Herbert Mines Associates executive search, said, “Running a company, whether it’s Saks Fifth Avenue or Home Depot, is about leadership, listening and taste. We have to be vigilant and go outside of the traditional arenas to find talent because there is just not enough talent in this retail game of musical chairs. Wilson’s got a strong reputation, particularly with those people who have worked for him. He’s savvy enough to know what he doesn’t know, and smart enough to learn what he needs to and to delegate the rest. Being a leader is being a manager of managers and not doing everything yourself.”

There’s been speculation that Wilson angled for the Saks job because of what retail sources described this week as a precarious situation at Donna Karan. Asked about that, Wilson asserted, “This is an important question. It was absolutely not a difficult situation at Donna Karan. The improvements are remarkable. I’m very proud to have been a part of that organization.”

He added: “Only something incredible would have lured me away. Steve and Brad connected with me and I connected with them in such a way that [Saks] makes a lot of sense. It’s rare when this kind of opportunity comes along. It’s with great reluctance that I said goodbye to Donna Karan.”

While working at Karan, a division of LVMH Moët Hennessy Louis Vuitton, Wilson also served as chairman and ceo of Eluxury.com, LVMH’s e-tailing arm based in San Francisco. Since joining LVMH in 1996 and prior to leading Donna Karan, Wilson was ceo for the LVMH Specialty Store Retail division and ceo of LVMH Fashion Group for the Americas, where he dealt with Saks and other luxury retailers as a supplier.

Before, Wilson spent 17 years with Duty Free Stores, which is currently part of LVMH, serving as president and chief merchant. Duty Free operates airport stores, as well as 12 150,000-square-foot Duty Free stores, which Wilson cited as an example of his experience running big-box stores. The bigger boxes accounted for 70 percent of the business, Wilson said.

Overall, for the third quarter at the Birmingham, Ala.-based Saks Inc., net income rose to $12.4 million, or 9 cents a diluted share, from last year’s $1.9 million, or 1 cent. Excluding an aftertax gain of $5.5 million, or 4 cents, this year, and a $2.6 million, or 2 cent, aftertax charge a year ago, earnings per share would have increased to 5 cents from 3 cents in the prior-year period. Not counting the one-time gain, earnings exceeded the Wall Street forecast by 2 cents.

Net sales advanced 4.3 percent to $1.47 billion from $1.41 billion a year ago, and comparable-store sales added 3.1 percent. Of that, both SFAE and SDSG reported healthy revenue growth, with the department stores contributing a 3 percent rise in sales to $866 million as comps advanced 1.8 percent.

The department store group posted a 1.6 percent gain to $20.9 million.

At the department stores, Martin said initiatives in product and marketing differentiation have begun to bear fruit. Proprietary brands will account for about 15 percent of sales this year, up from 12 percent last year, the ceo said, while sales from “differentiated products,” including exclusive products from core vendors and those from emerging or “unique” suppliers, will approach 30 percent of revenues versus 17 percent last year.

Overall, for the nine months of the fiscal year, Saks registered profits of $1 million, or 1 cent, versus last year’s net loss of $43.9 million, or 30 cents. Net sales for the period inched up fractionally, or 0.4 percent, to $4.09 billion, but comps dipped 0.3 percent.

The performance and the news about Wilson, which was widely expected, failed to impress investors. They traded the firm’s shares down 21 cents, or 1.4 percent, to close at $14.79 in New York Stock Exchange trading Tuesday.