PARIS — A group of female European industrial designers are making a career of a craft that has traditionally been dominated by men — artful products for domestic use.

The new presence of lauded female designers in the field is... 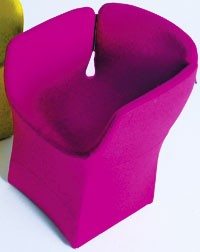 PARIS — A group of female European industrial designers are making a career of a craft that has traditionally been dominated by men — artful products for domestic use.

The new presence of lauded female designers in the field is being felt not only in new products shown at trade fairs and headed to retailers throughout the continent, but in the classrooms of prestigious institutions, as well.

Florence Doléac, an industrial designer and part-time professor at ESAD, the School for Art and Design Studies, in Reims, France, said the number of women in the classroom has grown to 50 percent over the years.

“In the past, the profession required a degree in engineering,” said Inga Sempé, an industrial designer and professor at Camondo, an architecture and design school in Paris. “Today, however, there are more schools specialized in design and they are attracting more women.”

If Sempé’s metallic-framed bookcase, oddly trimmed with synthetic bristles, or Doléac’s ceramic fruit holder in the shape of a robot are any indication, female designers are doing more than pink vases and pastel flowerpots. Their nongender-specific objects are playful and functional, and drawing the attention of many of Europe’s leading furniture manufacturers, who are producing their works.

A look at some of Europe’s top female industrial designers:

Milan-based architect and designer Patricia Urquiola, 42, is one of the most widely produced female industrial designers in the trade, having collaborated on projects with firms such as Moroso, Bosa, De Vecchi, De Padova and Kartell.

“Objects must communicate,” Urquiola said. “There should always be a hint of irony, humor or sensuality. I think with my hands. I’m my own client.”

At the Salone Internazionale del Mobile furniture trade show in Milan in April, Urquiola’s creations were featured in many of the leading furniture manufacturers’ collections. Her “Bloomy” chair for Moroso, inspired by the petals of a cactus flower, and her series of “Flo” chairs woven in rattan for Italian furniture giant Driade are two of her latest creations.

When it comes to craftsmanship, Hella Jongerius, 41, of the Netherlands, leaves little space for competition.

She was named Designer of the Year at Paris’ Salon du Meuble in recognition of her whimsical yet pragmatic pieces produced on commission that have a handmade look, such as her “embroidered” ceramics, flexible silicone sinks and kerosene camping lamps for the living room.

For the Kreo Gallery in Paris, Jongerius has created a collection of furniture to be exhibited this winter. She has also designed pieces for Cappellini, Hermès, Maharam and Swarovski.

“It’s important to mix different worlds, historical with contemporary or crafts with high tech,” she said. “It’s what gives an object character. An object’s identity comes out of process.”

Inga Sempé, 36, of France, finds beauty in the mundane, be it a doorknob or a potato peeler.

Sempé was awarded first prize for industrial design by the city of Paris in 2002 and has contracts with leading furniture manufacturers, having worked with Cappellini, EDRA and Baccarat. One of her most talked-about designs is a “brush” bookcase designed for EDRA — a metal frame entirely covered with white and black synthetic bristles through which one reaches to access books. Sempé’s pleated lamp design, created for Cappellini, is also getting rave reviews.

“Functional objects are the most interesting and the most overlooked,” she said. “They do not need to be sensual to catch the eye.”

French native Florence Doléac, 35, broke off from the French design team called “Radi designers” last year in order to design under her own name.

This summer, Doléac’s creations for the house, a balance between functional and conceptual objects, were exhibited at ToolsGalerie, a trendy Parisian gallery for luxury design. For the exhibit, Doléac created a limited edition of ceramic table objects ranging from animalistic vases to vessels designed to hold fruit in the shape of robots. She also created a series of playful robot lamps.

“I don’t like to work with codes,” she said. “I don’t spend hours studying projects, I tackle them instinctively. I like to consider it as a game, but with certain rules to respect.”