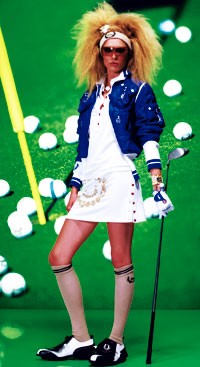 Up-and-coming golfers like Michelle Wie, Grace Park and Aree Song are paving the way for a new generation of players who may not even remember when golf was primarily a man’s game and the Ladies Professional Golf Association tour couldn’t get air time.

The rising popularity of golf is also luring more apparel firms into the category, including some brands more associated with high fashion than teeing off. Many golf apparel makers that used to produce scaled-down versions of their men’s wear for women are now addressing women’s needs with functional and fashionable clothes.

“There is more consideration now that women want something not only for the golf course, but something they can also wear for traveling or out for cocktails,” said Peri Cubillo, golf and snow sports buyer at Paragon Sports in New York. “Women want versatility and items that will go beyond the golf course.”

Among big-name fashion brands that now have women’s golf lines are Ralph Lauren, Tommy Hilfiger, Escada, Burberry and Liz Claiborne, as well as sports-oriented labels such as Nike, Adidas and Lacoste, and the party is growing fast.

Fashion rebel John Galliano recently launched an over-the-top collection of golf wear for Christian Dior complete with micro-miniskirts, logo polo shirts in bright colors and funky prints. Izod is developing a golf collection scheduled to hit stores for spring 2005, and Lilly Pulitzer is pumping up its golf offerings and recently signed on as the apparel sponsor for the LPGA Golf Clinics for women, which kicked off in March.

Dan Chirico, president of Bogner of America, which makes ski and golf apparel, said: “There is an interest now in looking good on the golf course, and we see a niche and an opportunity for stylish and technical golf apparel that is not stodgy. And this business is not saturated with fashion brands.”

As they climb the corporate ladder, many women have realized the benefits of learning to tee off as a way to enhance their business relationships and develop their careers, and so more are picking up the game, said golf apparel designer Claudia Romana.

Golf clinics, schools and club days specifically for women have sprung up in recent years, and the LPGA tour, which has 33 tournaments this year, has had a 14 percent rise in attendance and a 26 percent increase in network viewers since 2001, said an LPGA spokeswoman. There was a 22 percent increase in the number of women golfers from 2000 to 2002, growing to 5.8 million, according to the National Golf Foundation, and women spent $4.3 billion in 2002 on golf merchandise.

Much of the apparel coming out now is made with technical and performance fabrics and updated styling, including tank tops and shirts without collars, cropped shirts, capri pants and short skirts. While many golf courses have restrictions about what can be worn, the rules are loosening somewhat and there is more flexibility for women.

Peter Holleran, fashion market editor at Golf for Women magazine, which, like WWD, is owned by Advance Publications, said, “The market is changing. Younger players are driving the business and silhouettes are becoming more athletic, and companies such as Ralph Lauren and Burberry are raising the bar on fashion.”

David Hagler, director of apparel for Nike Golf, said: “The golf market has been going younger and more fashionable. In the last two years, there has been a real push to make more fitted clothes that also have performance fabrics.”

Nike launched its women’s golf apparel business in 1999 and is on track this year to have an increase of 55 percent in its women’s apparel, which is currently outpacing the men’s division, he noted.

While some department stores such as Bloomingdale’s and Nordstrom carry a selection of golf apparel, most clothing is still sold in specialty stores, including golf and sporting goods chains, and pro shops on courses and at resorts.

Some golf stores said they are allocating more space to women’s apparel. At New York Golf Center, one of Manhattan’s largest golf stores, women’s now accounts for nearly half of all the apparel offerings, up from about 20 percent a few years ago, said Charles Rhee, general manager of the store.

Among the store’s top-selling golf lines for women are Claudia Romana, Jamie Sadock and Ralph Lauren, he said. This coming weekend, The Golf Club at Chelsea Piers in Manhattan is sponsoring a big golf event, including its first fashion show that New York Golf Center helped coordinate.

At Paragon, more lines are being brought in that cater to fashion customers. Brands sold at Paragon include Prada, Burberry and Lacoste, as well as Nike and Adidas.

“Versatile and lifestyle items are what’s driving sales in this business,” said Cubillo.

Swinging in Style is a new golf store in Aster, Fla., that only carries merchandise for women.

“We saw a real need for our store, since many pro shops have limited space and don’t carry a lot of merchandise for women,” said co-owner Marilinda Scarsella. “While we cater to country-club women, we are testing the waters with more fashion-forward brands, such as Hyp and American Goddess.”

Many of the golf newcomers stress they are bringing fashion into play with their new lines.

“Our golf line is designed to appeal to golfers and nongolfers,” said Suzanne Karkus, president of Izod women’s wear, which is produced under license by Kellwood Co. “We will have regulation length and comfort stretch and all the things golfers look for, as well as fashion elements.”

Unlike some other brands, Izod is targeting department stores, with the plan that the collection will be sold alongside the core Izod women’s wear offerings.

Lilly Pulitzer introduced its golf line about two years ago and takes a lifestyle approach to the collection, said Sandi Davidson, vice president and creative director. As the sponsor of the LPGA clinics, Pulitzer is wardrobing the clinic instructors and staff in looks from its Club line. Cobranded merchandise with the LPGA Golf Clinics for Women logo is available for purchase at the clinic events.

Romana began making golf apparel for herself and her friends in 1998, and she began selling the line to stores in 2002. Romana’s designs include long-sleeved polo shirts, fitted silk sweaters, stretch corduroy pants and cashmere sweaters, many with prints and stripes. She makes sure her apparel fits in with the requirements necessary for play at many clubs and courses.

“Golf apparel also has to be about function,” Romana observed. “It’s not just making funky colors. There are a lot of regulations and you have to comply with those.”