Five women’s wear and five men’s wear designers will compete for the two spots and the opportunity to participate in the international finals. 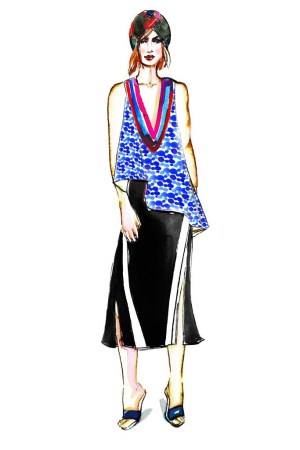 On Tuesday, the two U.S. winners of the 2015-16 regional Woolmark Prize will be selected at Milk Studios Penthouse in New York.

Five women’s wear and five men’s wear designers will compete for the two spots and the opportunity to participate in the international finals. One men’s wear and one women’s wear designer will be selected by a jury based on sketches of a six-piece merino wool capsule collection, with one garment actually produced. The two winners will receive a financial contribution of 50,000 Australian dollars, or about $37,000 at the current exchange rate, toward their next collection.

In addition to New York, five other regional competitions take place in London, Shanghai, Sydney,  Dubai, and Antwerp, Belgium. Two winners from each region will go on to compete in the international finals. The international men’s wear final will be held at Pitti Uomo in Florence in January, and the six women’s wear finalists will meet in New York in February.

The two international winners will receive $100,000 Australian dollars, or about $74,200, each and the opportunity to have their collection carried in Harvey Nichols in London; 10 Corso Como in Milan, Beijing and Shanghai; Matchesfashion.com; Mytheresa.com; Saks Fifth Avenue in the U.S.; Joyce in China; Isetan Mitsukoshi in Japan; Boutique 1 in the United Arab Emirates, and David Jones in Australia.

The U.S. nominees for the 2015-16 International Woolmark Prize, along with a sketch from each, are below: