NEW YORK — With women’s apparel sales now accounting for the majority of its business, Woolrich, an estimated $200 million operation, is looking to build on that dynamic. 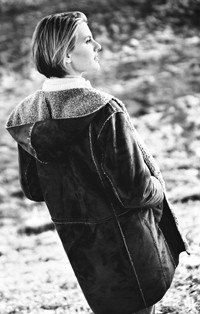 NEW YORK — With women’s apparel sales now accounting for the majority of its business, Woolrich, an estimated $200 million operation, is looking to build on that dynamic.

This story first appeared in the January 13, 2004 issue of WWD. Subscribe Today.

For the first time in the firm’s 174-year-old history, women’s apparel sales exceeded men’s by a ratio of 55 percent to 45 percent last year. That’s a momentous occurrence for the 500-person company that started with one man selling wool shirts and socks from a cart to lumberjacks and railroad workers in rural Pennsylvania.

“When I first joined the company eight years ago, everyone talked about women’s apparel in reference to their mothers,” Eberhardt said. “I said, ‘We all want to wear Woolrich. Why does it have to be for our mothers?’ We made it younger and more contemporary without alienating any existing customers.”

Gone are the seven-ounce chamois shirts, flannel shirts and jumpers. Women between the ages of 35 and 44 now represent the core customer base, but the age range stretches from 30 to 50. That’s a switch compared with Eberhardt’s early days, when the typical customer was 50 or older.

“We’re more about a lifestyle, but we’re not targeting teens or women in their 20s,” she said.

Instead of designing downsized versions of men’s items, as was the case then, Woolrich has updated its style without walking away from its outdoorsy, authentic roots. To that point, the fall catalogue’s cover shows a woman wearing a crewneck sweater with floral detail and corduroy jacket holding a few pinecones.

“We like our consumers and accounts to create their own outfits,” Eberhardt said. “There is enough variety within the line where they can create many different looks.”

While the company dabbled in edgier looks in its advertising in years past, it is now focused on conveying a more cohesive product presentation through its ads, catalogue, Web site and line presentations. Last fall, Tim Joseph was promoted to director of marketing and media to head up that command.

“We don’t want to be technical and cutting edge,” Joseph said. “We played in that arena. There are quite a few players who do that better.”

This year’s ad budget will be consistent with last year’s, but there will be a greater emphasis on publications like Women’s Outlook and Dandelion that appeal to core customers, he added.

Sportswear accounts for 85 percent of women’s apparel sales, with outerwear making up the remaining 15 percent. Given that, outerwear is an opportunity for the brand, with the emphasis on barn coats, piles and fleece.

Sweaters are a strong point with female shoppers and accounted for 50 percent of fall dollar sales, Eberhardt said. This spring, the company is introducing petite sportswear and will extend those offerings with outerwear this fall.

Last year, the brand reintroduced sleepwear, after walking away from the category years ago. Nightshirts, pajamas and robes are featured in the six-piece collection. On another front, the brand plans “to continue to evolve” its licensed home goods division at Target, Eberhardt said.

To be more competitive, Woolrich reduced its price points by 15 to 20 percent two years ago through more diversified sourcing. The brand continues to see growth, even though its retail account base has dwindled to 1,300 due to more mom-and-pop stores closing their doors in recent years. While there is some department store distribution, the brand is more widely available in specialty stores, especially outdoor merchants.

“There is still a lot of business to be had in our existing customer base. We want to become more important to them,” Eberhardt said. “We don’t aggressively go after department stores. We want to stay true to our outdoor image.”