After 175 years in business, it was time to party. 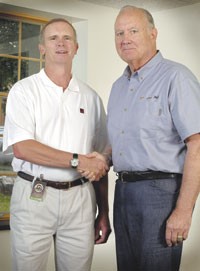 Woolrich, the $300 million company that made its name designing and manufacturing outdoor apparel, had every reason to celebrate. Everyone (the 850 people that populate this rural central Pennsylvania town, plus more employees that live on the outskirts) came out on Saturday for a full day of activities including a company parade, sheep-shearing, face-painting, log-cutting, a barbeque lunch and a speech from retired Gen. H. Norman Schwarzkopf.

“There were more people participating in the parade than there were watching it,” said Roswell Brayton Jr., president and chief executive officer of Woolrich Inc., a sixth-generation member of the Rich family who founded Woolrich in 1830. “But it’s all out of fun, and the people here are really enjoying themselves.”

Brayton said he invited Schwarzkopf to speak about the importance of leadership, but also because he is an outdoorsman, conservationist and humanitarian.

“He represents our lifestyle, his visit here has nothing to do with politics,” Brayton said.

Schwarzkopf, who took some time for a press conference before his speech to the 1,600 employees, manufacturers and retailers in attendance, shared stories of his past — hunting with his father and fishing with his sister. And why did he agree to come to Woolrich to celebrate?

“I was stationed in Alaska 30 years ago and there were two shirts I wore all the time,” Schwarzkopf said in the press conference. “One was black and red check and the other was black and green. They are both Woolrich and still hanging in my closet today.”