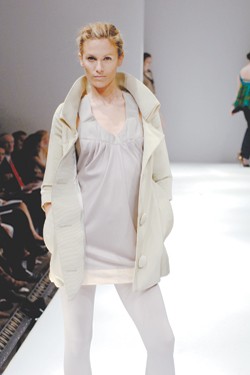 SAVANNAH, Ga. — Students at Savannah College of Art and Design may be surprised to learn that they are getting something designer Vera Wang lacks.

“I’ve been a designer, an editor, a retailer and stylist, but the only thing left for me is a design degree,” said Wang. In town to receive the André Leon Talley Lifetime Achievement Award, Wang talked about her own college years in a pre-show interview.

“I went to a liberal arts school — the Sixties prerequisite — and it took five and a half years to get through Sarah Lawrence,” she said. “When I finally graduated, my father kissed the earth. When I told him I wanted to go to F.I.T. for a design degree, he said, ‘Get a job.'”

While she regrets not officially studying draping and sketching, her experience with Vogue and with Ralph Lauren proved the best teacher.

Her advice to students is to “go to work for someone, where you can get paid to learn and absorb. No matter how much you think you know, you should always be willing and able to learn,” she said.

Later on that night, at the annual student fashion show, more than 50 undergraduate and graduate students showed their work at Trustee’s Theater in downtown Savannah, and Vogue’s editor at large, André Leon Talley, and Paula Wallace, president of SCAD, presented Wang with the award.