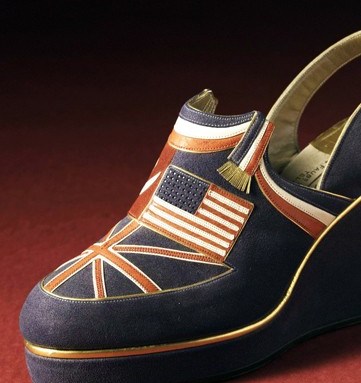 Some 300 fashion accessories and objects dating back to World War II will be on display here beginning today at an exhibition that pays tribute to fashion ingenuity against a backdrop of penury and restrictions between 1940 and 1944.

Held at the Mémorial du Marechal Leclerc de Hauteclocque et de la Libération de Paris – Musée Jean Moulin — twin museums dedicated to the history of the French Resistance and of the liberation of Paris — the exhibition showcases items ranging from the homespun to the high-end designer. Hand-crocheted hats sit next to a minimalist Hermès clutch made of panama straw, reflecting the paucity of luxury materials like leather and silk during the war years.

Other fashion accessories double up as clever stratagems used by the resistance movement, as in elegant handbags built with a double bottom to disguise propaganda documents, while scarves display their owner’s allegiance to the collaborationist Vichy government with a portrait of Marshal Pétain.

There is even an Hermès jacket made with checkered tweed fabric supplied by the customer, who must have taken to heart a fashion edict published in the October 1943 issue of Marie Claire: “These days, an ingenious woman is an elegant woman.”

The exhibition runs until November 15.