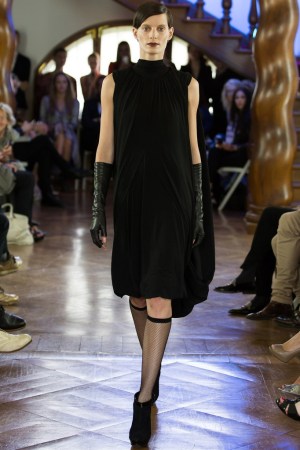 POTSDAM, Germany — Wunderkind is back. Designer Wolfgang Joop has resuscitated the Wunderkind collection for fall/winter 2012/13.

Joop presented 40 looks to 130 journalists, retailers and guests at the label’s headquarters in the landmark Villa Rumpf here Thursday. This comes after a year-long creative break, following the January 2011 falling out between the designer and his backers Hans-Joachim and Gisela Sander, who held a 65 percent stake in the label.

At that time, the atelier was disbanded, almost all of the 50 head staff let go, the Paris fashion show cancelled and the Wunderkind flagships in Berlin and London shuttered. Joop subsequently bought back the full rights to Wunderkind in March 2011 for 2.95 million euros, or about $4.1 million, converted from the euro for an average exchange rate for that month.

Currently produced in Germany — though Italian producer Anna Maria Roscini was sighted among the guests — the fall/winter 2011/12 collection will have limited distribution in the remaining Wunderkind stores in Berlin, Sylt and the shop-in-shop at Yousefy in Munich, plus five or six specialty stores including Eickhoff, Dusseldorf; Moda Donna, Nuremberg; Gigolo, Rosenheim; and Gallery Gazette in Tokyo.

“We’re buying it, though we have no budget left for the season,” said Rita Tetz, buyer for Gigolo, which carries Balmain, Givenchy, Polo Black Label, Rick Owens and Stella McCartney, among other designer lines. “It’s very different than the rest out there. Wolfgang (Joop) simply does what he likes, and our customers in Bavaria love it. We and they are happy he’s back,” she stated.

The Eickhoff team had previous commitments and couldn’t make it to the Potsdam presentation, but have made room for Wunderkind in next season’s assortment. “Wolfgang is untameable in his creativity and there’s talent in him one seldom finds in one designer,” enthused the specialty store’s founder Albert Eickhoff.  “We’re thrilled he’s back.”

“This ‘Sauvage’collection is my biography,” Joop said. “You can see touches of Tamara de Lempicka in the drape and the art deco, and the Trümmer Frau in the homemade touches of the tailoring… Everyone is looking for safety, but I want to give that little faux pas. Yet precision was my highest goal for only if you’re precise can you do the faux-pas.”

In business terms, however, Joop is hoping to leave missteps behind. “We were close to economic success and were producing 10,000 pieces a year. The order books were full and it was a moment of breakthrough when problems with our backer instead shut things down,” he said.

This collection has been pre-produced and the budget for the next collection is fixed. There are plans to show in Paris next season, though “not in a huge way. Who can compete with those mega-spectacles? But this year is completely safe,” he stated.

Joop said his multi-tasking would go on. “I work successfully for Galeria Kaufhof (as creative consultant) and we’ve signed with (the compression stocking specialist) Medi again. And it’s no secret I’m negotiating with (Holy Fashion Group) again on Joop!,” the designer’s first signature brand with which he parted ways in 2001.

“But even if I go back to Joop!,” he added, “I will keep up with Wunderkind.”