WWD Exclusive: First Look at ‘Punk’ at the Met

Curator Andrew Bolton gave an exclusive walkthrough of the exhibition, which officially opens to the public at the Metropolitan Museum of Art Thursday.

By Marc Karimzadeh on May 3, 2013
View Slideshow 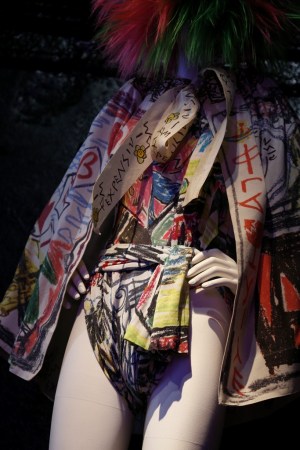 NEW YORK — What do dirty toilets have in common with punk? Everything.

The Costume Institute’s “Punk: Chaos to Couture” features a striking — if not slightly verging on the gross ­— replica of the bathroom at CBGB, the famed New York nightclub that is widely credited as one of the pioneer places of punk. “Patti Smith had this great comment about how all the action happened in the toilets at CBGBs,” said curator Andrew Bolton during an exclusive walkthrough of the exhibition, which officially opens to the public at the Metropolitan Museum of Art Thursday and runs through Aug. 14. The toilets, urinals and sinks add a suitably gritty touch to the display of 100 or so original punk outfits and designer clothes inspired by the movement.

“Everyone has an idea about punk,” Bolton said. “I think that’s what is so difficult to negotiate. In a way, we never set out to do a comprehensive history of punk. It was always a very specific, very conceptual take on punk.

“One of the reasons punks are difficult to define is because it originally started as a feeling, an impulse, so people still respond to it emotionally, even if they didn’t live through it,” he added. “We wanted to treat the subject matter with reverence, with punk individuals as heroes. Punk radicalized fashion, and introduced postmodernism to it — the collecting, the mixing of references, deconstruction.”

The exhibition makes a case for the movement’s origins in London and New York and how it influenced high fashion through today.

The entry gallery at the Iris and B. Gerald Cantor Exhibition Hall features a 16-foot-high LED screen showing a mosh pit of punks pogo-ing to music from “A Clockwork Orange.” Framing this is an original parachute shirt by Vivienne Westwood and Malcolm McLaren, and a riff on it by John Galliano for Christian Dior Haute Couture. “It sets the scene of chaos to couture, sidewalk to catwalk,” noted Bolton.

The entry leads to a theme of punk’s origins in New York and London — including the CBGB replica and another room built to mimic Seditionaries, Westwood and McLaren’s store at 430 Kings Road.

“To me the legacy of punk on high fashion is the aesthetic of the DIY,” Bolton said. The do-it-yourself galleries include Hardware, ie. studs, razor blades and safety pins, such as the Versace dress that made Elizabeth Hurley famous; Bricolage, with recycled materials like trash bags, including dresses from Gareth Pugh’s fall 2013 collection, and Graffiti and Agitprop, with Stephen Sprouse, Katharine Hamnett, Maison Martin Margiela, Moschino and more Westwood.

The architecture of the exhibition is surprisingly grand — moldings and arched display sets made of Styrofoam or actual trash that has been vacuum packed to drive home the DIY message.

“We wanted to have this real grandeur because we are treating the subject and the punks themselves are these heroic figures in terms of fashion,” Bolton said.

“Every designer has done punk at some stage,” he noted, “but I wanted to focus on designers who had engaged with it more consistently and, in a way, more intellectually.”

The exhibition will be feted at the Costume Institute benefit tonight, with Beyoncé as honorary chair and cochairs Rooney Mara, Lauren Santo Domingo of Moda Operandi, Riccardo Tisci and Anna Wintour.

The show ends with the DYI Destroy gallery, which includes ripped looks by Yohji Yamamoto, Chanel and Viktor & Rolf, as well as several pieces by Comme des Garçons. “I think that more than any other designer, Rei Kawakubo engages with punk as an intellectual paradigm,” Bolton noted. “We end with the ultimate deconstructed piece by Martin Margiela, which is a piece of fabric strapped around the body, and we gave it a last gesture as you leave.” The mannequin is flipping the bird.