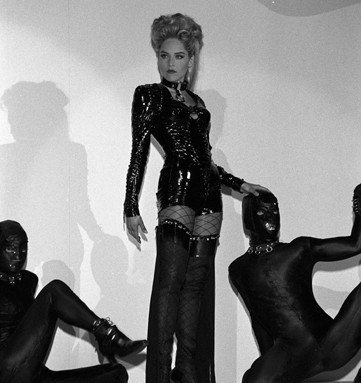 The annual Life Ball, a modern bacchanal in Vienna, is Europe’s largest AIDS charity event. But in 1992, a year before the Euros began their little party with a retrospective of Thierry Mugler’s work, the California Fashion Industry Friends of AIDS Project honored him in Los Angeles. And WWD was there.

It was actually the CFI Friends of AIDS Project’s sixth annual bash, and the day’s hottest actresses came out to model Mugler’s crazy creations. Sharon Stone, having been a model, relied on her basic instincts. “Acting is from your soul,” she said. “Modeling is from your ego.” Clad in a black patent leather Mugler number she found in Paris, Stone opened and closed the show in deliciously dominatrix style. Other actresses had to dig deep to strut their stuff. After all, as WWD put it, “the silhouettes of the clothes were only as good as the silhouettes underneath.” Linda Hamilton, still high on the success of “Terminator 2: Judgment Day” the year before, was known for her toned body but was still wary. “Not being the model type, I was concerned,” she said, “…I’m wearing a pair of pants that are see-through. I mean really, really see-through.” And giving another meaning to catwalk, Julie Newmar looked absolutely purrrr-fect as she snarled and slithered toward the crowd in her slashed latex catsuit.

The afterparty was held at L.A. hot spot Atlas with Mugler admirers Barry Diller, Johnny Depp and James Cameron in attendance. Amidst the chaos and costumes Atlas owner Mario Tamayo had a fitting closing comment for the night: “To snake through this crowd, you have to rub Vaseline on your hips.”