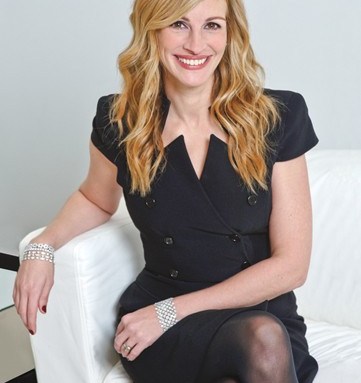 Julia Roberts: The Lady of Lancôme

“It’s kind of like every girl’s dream, really,” said Julia Roberts, referring to her new role as Lancôme’s global ambassador. Roberts said she was attracted to Lancôme in part because of its French je ne sais quoi. Roberts is hardly the only celebrity cashing in on her famous face. From the design atelier to the executive suite, celebrities are sweeping into the beauty and fashion world. Sarah Jessica Parker, for one, is joining Halston with far more responsibility — as the company’s president and chief creative officer. Jessica Simpson, no stranger to the apparel licensing business, is collaborating with Camuto Group, which holds the master license for Simpson’s brand. The two have signed a long-term licensing deal with Jones Apparel Group Inc. to develop, design, produce and distribute a full jeanswear collection under the Jessica Simpson name. Fashion newbie and former MTV veejay, Alexa Chung, has been tapped to create a fall collection by Madewell, which is a first for both the brand and the starlet. Chung said of the teaming, “I love how their vibe is a mix of vintage and new — it completely clicked with me.”

In the retail world, the technological revolution has only just begun. Retailers envision a world where everything will be knitted together by social media and accessible from any mobile device anywhere. Should this promotion come true, the result could be new competitors, and a blurring of the distinctions between customers, designers and retailers. At present, Procter & Gamble and PFSweb have taken baby steps into the online sphere, partnering to launch an e-commerce site featuring P&G’s different brands. According to a statement from P&G, the store, called eStore, will test e-commerce concepts and launch in the spring. The Web has become a particularly popular safe haven for beauty brands as traditional retail avenues struggle. Some, like Smashbox, Pop Beauty and Fusion Beauty, are flocking to an emerging distribution channel: private online sample sale sites.

Bloomingdale’s announced it is taking the outlet plunge, with plans to open four units on the East Coast by fall with more to come across the country next year. Macy’s might follow Bloomingdale’s example in an industry-wide push to open outlets. Not all major retailers are embracing the movement to mass, however. Liz Claiborne is retreating from its outlets outside of the U.S., and has sold its 38 Liz Claiborne outlet stores in Canada to Laura Canada, a privately held specialty retailer based in Montreal.

Chief executive officer of Istithmar World, David Jackson, is out of the job as of Tuesday, as the Dubai-based investment company appears intent on accelerating restructuring efforts for its various operations, including its U.S. retail holdings, Barneys New York and Loehmann’s. Andy Watson will be interim ceo. “His experience will be vital in actively managing the portfolio of assets held by Istithmar World,” said Aidan Birkett, who is chief restructuring officer and is leading the moves by Dubai World to renegotiate $27 billion in debt.

Sales of outerwear and nonapparel items, coupled with strong demand from Europe and Asia-Pacific, drove third-quarter revenue at Burberry Group plc up 15.5 percent to 380 million pounds, or $619.4 million. Also on the upswing, Compagnie Financière Richemont outshone market expectations with a 2.4 percent spike in third-quarter sales to 1.59 billion euros, or $2.35 billion, from 1.55 billion euros, or $2.29 billion, thanks to top-performing brands Cartier and Van Cleef & Arpels and to strong demand in Asia. Alas, not all luxury brands were as fortunate in the previous quarter, as shares of Coach Inc. fell more than 5 percent Wednesday. Despite gains in overall sales and profits, the company’s numbers ultimately fell below analysts’ expectations.

The media sector continues to play musical chairs in 2010. Gina Sanders has been named president and chief executive officer of Fairchild Fashion Group, effective Feb. 1, as a replacement for Richard Beckman, who resigned last week to become ceo of e5 Global Media. Time Inc. is venturing into new pastures of its own by acquiring StyleFeeder, one of a growing number of Web sites that may be the future for glossy magazines. Terms of the deal were not disclosed, although an article in The Wall Street Journal estimated it was “well into eight figures.”

The 67th Annual Golden Globes saw a torrential downpour on Sunday, sending stars running for cover and publicists unfurling umbrellas as they tried to salvage the red carpet photo opportunities. Even the biggest A-Listers couldn’t stay dry, as evidenced by Tom Ford and Julianne Moore in Balenciaga, who were both glistening, to put it nicely. After the red-carpet shuffle and Globes ceremony, boldfaces hightailed it to where the real action was, the after parties. Click here to view photos from the soirees hosted by InStyle-Warner Bros., HBO, Twentieth Century Fox, NBC-Cartier and Weinstein Co.-Belstaff.

A degree of optimism has buoyed retailers and vendors thanks to the offerings from the Milan runways and men’s market in New York next week. The news of unexpectedly solid fourth-quarter and holiday results even has some talking less about survival and more about growth, and how to achieve it. While in Milan, Italian men’s wear designers smartened up their acts for fall by playing to their strengths and offering a commercially viable selection of informal fare that hit just the right notes with buyers. In preparation for the Paris shows, WWD sat down with men’s wear designer Sir Paul Smith, 63, who talked about everything from fakes and frauds and canny money management to the psychology of the young Japanese consumer.
As Men’s Fashion Week continues, designing greats Jean Paul Gaultier, Junya Watanabe and Louis Vuitton paraded their wares in Paris. Stay tuned to WWD’s men’s fashion microsite for up-to-the-minute updates from the shows, backstage images, and live scoops.

Men’s wear has a new couple: HMX Group and Joseph Abboud. On Wednesday, the company said the two-time CFDA award winner will join the concern as president and chief creative officer, where he will oversee all creative direction of the company’s portfolio of brands, including Hickey Freeman, Hart Schaffner Marx, Coppley, Bobby Jones, Exclusively Misook, Simply Blue and Monarchy.

Pre-fall offerings keep fashion-philes on their toes during the lull between the spring 2010 and fall 2010 seasons. The most recent pre-fall designs include “relaxed and sporty pieces” from Bottega Veneta, “iconic styles with a clean, graphic approach” from Jean Paul Gaultier, and a “military vibe” from Yves Saint Laurent. Stay tuned to WWD’s pre-fall microsite to keep up to date on the latest looks.
Newsletters