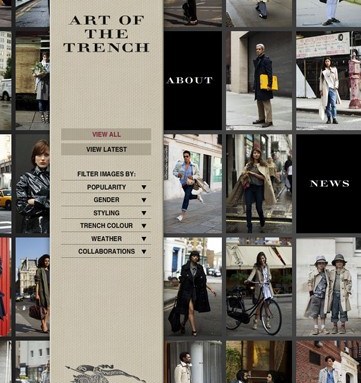 Get ready for marketing via social media — the sequel. The next hot TV show, music or fashion video is coming soon from a brand near you.  Content is not only king, it’s multiplying rapidly and is in the hands of growing numbers of people — much to the joy, the chagrin and even fear of brand marketers who are learning from and leveraging these networks, executives said. Whether it’s a tweet from Tommy Hilfiger, a new program on A|X TV, or a consumer’s thoughts on a Burberry trenchcoat posted at Burberry’s artofthetrench.com, content is engaging enthusiasts, spreading the day’s news, creating spur-of-the-moment parties, sporting events and volunteer efforts — even sparking some purchases. Also, social media’s growing power to sway buying decisions of “friends” and strangers alike continues to shake up the fashion world. Shoppers now have a need-to-know mentality when it comes to designers and brands. Somewhere, someone is watching. Always.

Not one to let a little snow stand in the way of their sense of style, actresses such as Tilda Swinton, Katie Holmes, Marisa Tomei and Naomi Watts were out and about in designer duds ranging from Swinton’s Lanvin zip-up suede jacket and Chanel trench to Watt’s Tod’s puffer designed by the brand’s creative director, Derek Lam. Tomei donned an Alexander McQueen frock and Costume National heeled boots for the premiere of her comedy “Cyrus,” and Holmes was spotted in a Chloé tunic. At Saturday’s 16th annual Screen Actors Guild awards, actresses paraded down the red carpet in gowns by Bottega Veneta, Alberta Ferretti, Carolina Herrera, Balenciaga and Alexander McQueen, to name a few. Drew Barrymore dazzled in a navy strapless Monique Lhuillier gown and Diane Kruger was a vision in a saffron Jason Wu dress.

President Obama might become “visibly angry” when outsized Wall Street bonuses come up, but retailers catering to the well-heeled in New York and other financial centers have a somewhat different reaction — something more like “ka-ching.” Setting aside the propriety of billions of dollars in bonuses to bank executives after the near collapse of the global financial system, the payouts could help luxury retailers. Bonuses can account for 90 percent of a Wall Street titan’s annual take-home pay and should start hitting personal bank accounts just in time to boost March sales.

Beauty: A Decade That Shaped an Industry

The past decade was a pivotal period for the beauty industry that triggered both an expansion and contraction of retailing and manufacturing, the rise of the Internet as a channel of authority, a surge of premium-priced skin care and the further globalization of the way the business is conducted. What happened in the last 10 years also set the stage for the present era of multiple choices. Beauty trends for the following year include a move to more budget cosmetics brands, a continued presence by minerals and a strong performance within facial makeup. Industry experts hope fragrance sales will stabilize, and skin care is the beauty category with the most global growth potential between now and 2014. WWD had the The Doneger Group weigh in on the potential of seven unsigned heroines and also sat down with Youcef Nabi of Lancôme International, the person responsible for signing Julia Roberts on as the L’Oréal-owned brand’s global ambassador.

WWD’s five-part Year Ahead series examined the year ahead across all segments of the business. There was an in-depth look at the fashion and retail categories on Monday, media and entertainment on Tuesday, the financial sector on Wednesday, emerging markets on Thursday and the beauty industry on Friday.

Forever 21 has opened its first department store-style location in an effort to strengthen its customer base and provide more choices. The 85,000-square-foot unit, a former Mervyns space, is in the Macerich-owned Los Cerritos Center in Cerritos, Calif., about 20 miles from downtown Los Angeles. Executive vice president Larry Meyer said the new concept would help the chain appeal to customers over age 24, a demographic that represents more than one-third of Forever 21’s customers, with 45 percent falling between the ages of 18 and 24 and 20 percent under 18.

Men’s wear designers were lauded for their savvy fall collections, prompting some buyers to raise orders by up to 15 percent. Included in these collections is Lars Nilsson, former designer of Gianfranco Ferré, Nina Ricci and Bill Blass, who launched his signature collection, Mr. Nils, this week in Florence. Inside the sculpture museum Museo Marino Marini, slim dark suits were displayed on mannequins, which were elevated among the artworks on pedestals. Nearby, preppy outdoor looks were modeled among photos and a film of a Swedish snow scene. At John Galliano, it was all about classic Sherlock Holmes, except the designer’s grand outerwear was reworked with new materials, including clear PVC and technical nylon. There was also a nod to the renowned dandy Bunny Rogers, followed by looks inspired by Muay Thai fighters in bright satin and leather. Designer Kris Van Assche delivered his own interpretation of cozy and comfortable clothes at Dior Homme – albeit viewed through coal-colored glasses – and Rick Owens’ runway was filled with sophisticated and tailored coats, from long and roomy jackets with padded, square shoulders to a raincoat with a pointed hood. See all collections from the ongoing season here>>

You didn’t need a shot of tequila to get into the Mexican spirit that Jean Paul Gaultier captured with his spring couture collection. While more showgirl than socialite, the show was a hoot. Never mind that the designer hasn’t been to Mexico in 20-some years: This gringo’s take was as vivid as the palm frond swaying from the wrist of Karlie Kloss. At Valentino, Maria Grazia Chiuri and Pier Paolo Piccioli’s couture creations included billowing butterfly dresses, feather-flecked tunics and pale, whisper-thin gowns that brought to mind forest nymphs, while Elie Saab confected an endless sugary river of mermaid evening gowns in pretty nudes and pastels that, in his favor, relied more on lace, less on glitter. Similar themes were spotted at Chanel, solidifying high-shine and iridescent materials as a trend for this spring’s couture shows. In couture-related news, it was reported this week that an influx of younger clients from fast-developing Asian markets is helping lift Europe’s few remaining couture houses. See all collections from the ongoing season here>>

This week brought even more pre-fall collections from top designers such as Stella McCartney, whose standout pieces included glittery racing green mohair knits, a flared Prince of Wales check suit à la Bianca Jagger and a camel Sherlock Holmes-style cape-coat. Frocks had McCartney’s signature ease — a silk smock in a blown-out paisley, a sequin asymmetric dress in a blurry animal print — while her black lace group had a grown-up attitude. At Miu Miu, Miuccia Prada rehashed one of her favorite themes for fall — bourgeois vintage. In her hands, traditional wools such as windowpanes and checks got a sassy uptown spin via bright colors such as turquoise and banana yellow for an overall slim, short and sweet silhouette. Rodolfo Paglialunga’s first pre-fall collection for Vionnet was a charming cocktail of urban, Seventies and sporty pieces, and avant-garde Berlin designer Esther Perbandt delivered sleek and structured separates in shades of black, taupe, navy and cognac. Her shredded neckpieces played heavy with light, draping over cropped sweaters and fluid pants and blouses in washed silk, silk tulle and poplin. See all collections from the ongoing season here>>
Newsletters