The spring '08 collections were fabulous, rich with ample thought-provoking fare. 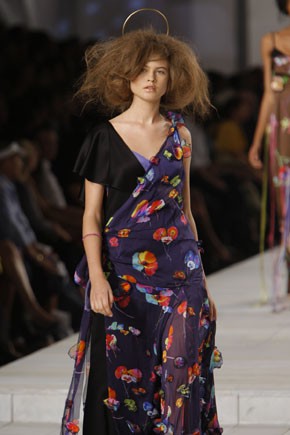 Marc Jacobs
Even with the hindsight of hundreds of shows, Marc Jacobs’ New York blockbuster remains the season’s most intriguing. Conflicting opinions heralded the designer as fab fashion deity or Satan of schmattas. Jacobs foretold both sides, however unintentionally, with a little help from master milliner Stephen Jones.

Prada
“Pajamas decorated with fairies—who will wear that?” queried one nonbelieving fashion editor. More to the point, who other than Miuccia Prada would dare suggest it? Her dark fairy tale was captivating.

Lanvin
Reality fascinates? You bet. With this coat-and-dress combination, Lanvin’s Alber Elbaz turned every working woman in his audience into his love slave, fashionably speaking.

Balenciaga
Tired of ho-hum spangle-ry—here, here—Balenciaga’s Nicolas Ghesquière proposed a shocking space-glam alternative for big nights out. Whether the red-carpet set boards the ship remains to be seen.

Giles
The environment was on the mind of many designers, including Giles Deacon who paid tribute, ironically, in full-on leafy Latex.

Rodarte
Watching young talent develop is one of fashion’s great joys. Rodarte’s Mulleavy sisters may have struggled a bit, but they took a major step toward commercial viability.

This article was originally published in WWDSCOOP, a supplimentary publication available to WWD subscribers.