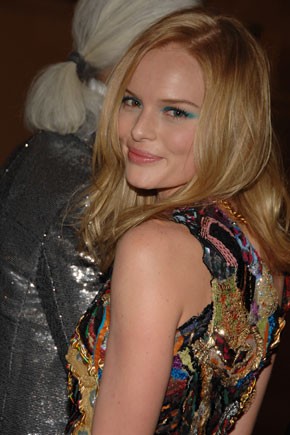 Some boldfacers dawdled during cocktails and got locked out of the first act. Even their celebrity couldn’t save them. Take Margo Stilley: “I was in what I like to think of as a very elite, very exclusive group that got stuck outside. They wouldn’t let us in even though we all said, ‘Do you know who we are?’”

In Hollywood it may be assumed that celebrities take precedence at any publicized bash, but in a time when they are the last people one expects to really buy clothes, should designers make such a big deal of them? (Sure they’re photographed, but people still have to run a business here.) Nevertheless, during a recent trip out West, Stella McCartney invited Charlize Theron, January Jones and Rashida Jones to join her for dinner at her Beverly Boulevard boutique. Good for McCartney, she had her priorities straight: “Where’s the pizza? I’m starving.”

More than any event recently, the Costume Institute’s Superheroes gala inMay was swarming with A-listers. Tom, Katie, Victoria, Gisele, Jenniferand Beyoncé all greeted hosts Julia Roberts, George Clooney and GiorgioArmani in the receiving line. Compared with years past, attendance by the social set was extraordinarily low—perhaps to make room for more celebs, who seemed alarmingly open and relaxed for a change. Take Scarlett Johansson, who couldn’t stop dishing about her engagement to actor Ryan Reynolds.

The crowd left even celebrities in their own right, like Super Bowl MVP Eli Manning who was there with his wife, Abby, starstruck: “I’ve never seen anything like this.” (Yes, sports stars are the new black, as this event alone drew Manning, broadcaster and former New York Giant Tiki Barber, New England Patriot Tom Bradyand New York Ranger Sean Avery, who was there despite suffering a lacerated spleen only days before.)

Since the evening’s cocktail hour, dinner and performance is all rather calculated, any shenanigans are saved for after hours. This year, Armani threw Clooney an exclusive 47th birthday bash at Bungalow 8 where every face in the room was famous. John Mayer and Fergie climbed on a banquette and sanga duet, while Katie Holmes sipped Champagne and talked with Liv Tyler about their kids. It was David Beckham’s birthday, too (the big 3-3)and so Amy Sacco brought out a second birthday cake with candles ablaze.

Most celebrity moms there had nannies who were taking care of school drop-off duties the next morning (doesn’t everyone?), and so they stayed out until the wee hours. But not Helena Christensen, who knew from past experience to call it an early night. “It’s the worst whenyou show up and see the other parents when you smell of alcohol.”

This article was originally published in WWDSCOOP, a supplimentary publication available to subscribers.