Former Wink designer Wynn Smith, now living in Kansas, has turned to styling. He talks about the transformation. 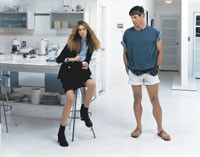 NEW YORK — “I want to learn to hook rugs,” Wynn Smith, former Wink designer, says matter-of-factly about the finer points of needlework, a recent hobby. “I’m doing a pillow now,” he continues of the oft-stereotyped pastime. “It’s latticed and in two shades of blue and ivory.”

To those familiar with the 40-year-old, or the popular contemporary line he founded, that statement comes as a surprise, as does the fact that Smith also spends a fair amount of time on yard work, cooking and shopping at the local feed store in Wichita, Kan., where he now resides. After all, just what is the designer, whom retailer Linda Dresner once noted could take over at Yves Saint Laurent, doing with such agrarian pursuits? Buying clothes, for instance, at the very same place where one purchases tractor equipment and blankets for horses and cows?

“Are you kidding?” is Smith’s own response when asked what he would have thought years ago of his activities now. “I would have said, ‘I’m much cooler than that.'” Well, if Ron Galotti could run a farm in Vermont after being publisher of GQ, then certainly Smith could pull off the high-waisted Wrangler jeans in the Midwest — where he’s originally from — after a career making sophisticated dresses and sportswear.

Of course, he hasn’t abandoned fashion entirely. While he has hung up the design reins — save for the occasional shirt he makes for himself in his basement — Smith has turned to styling. In fact, his big debut, photographed by Tina Barney, is in the current issue of Arena Homme Plus, out just last week in the U.K. The cast in the New York-based shoot includes a hodgepodge of characters, like Elaine of Upper East Side eatery Elaine’s, actress Tatum O’Neal, a Broadway dancer and Eighties model Jeff Aquilon. His former Wink creative director, John Vertin, also happens to be his partner in this new venture.

“It’s like New York baroque,” Smith says of the Arena story titled “Vanitas,” which was shot in one week in August. “[John and I] thought it might be fun to bring Jeff back — he was a famous Bruce Weber model — and show him in younger clothes, like Raf Simons and Bernhard Willhelm. It’s like a mini movie about this narcissistic guy who was once a big hot shot, sort of the Linda Evangelista of his time. It took three weeks to prep for it.”

So is this really the end of his ready-to-wear designs, which found favor with many a retailer and editor? “It was not an easy decision to make,” Smith says of pulling the plug on his six-year-old collection. “It was painful and I miss designing, absolutely, but I kind of have said everything I wanted to say with Wink. I kind of wanted to move on.”

And, oh, has he moved on. The first denim he did for Wink was named “the Brooke jean,” after Brooke Shields in her Calvin Klein days; now, Smith and Vertin work repeatedly with her, having styled Shield’s recent book cover, an upcoming ad and a 2004 fall fashion story, photographed by Denis Piel, for New York magazine. It was the latter that gave Smith his first taste of being a stylist; Vertin was contributing editor for the glossy and asked his former partner to help. As for Piel, he was also the inspiration behind the duo’s spring 2003 collection.

“If I designed again, I would want to come back and do more expensive clothes, designer price points,” Smith says. “But I’m having fun now. I get to go to New York, spend three or four weeks there, and then it’s like, OK, job’s done. I get to go back to my home where I have a house. I live on a park, I have an SUV and a dog. Why put limits on yourself?”