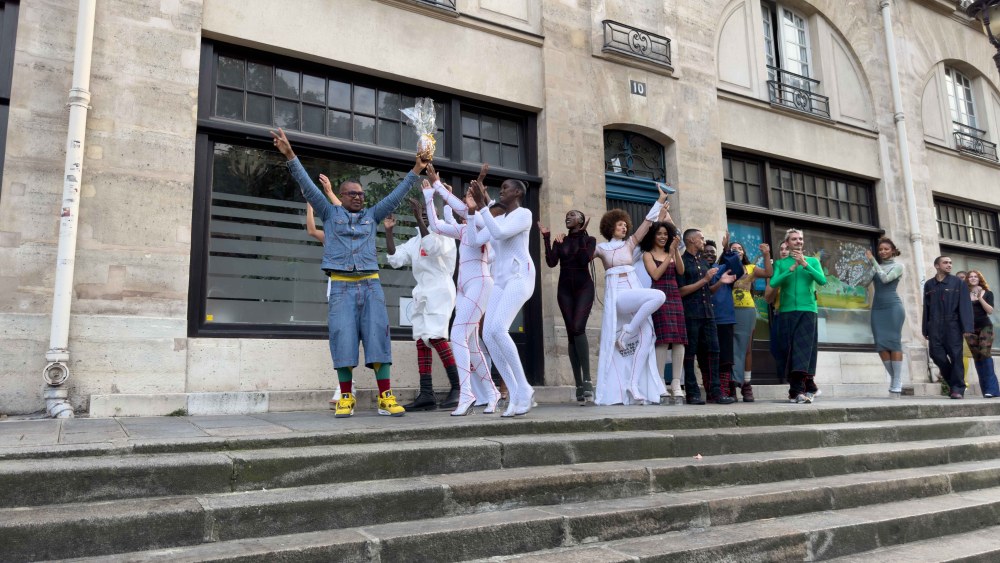 “You always to fight to do things here in Paris,” said Lamine Badian Kouyaté ahead of the show marking the 30th anniversary of his label, Xuly Bët.

“Fashion has a lot to address,” the designer said after a guerrilla show that took place at a stone’s throw from Paris’ city hall and the Climate Academy, a structure the municipal leadership set up to educate, inform and encourage people on ecologically sound practices, housed in the former city hall of Paris 4th’s arrondissement.

Badian Kouyaté had intended to make a statement by showing there, given the brand’s “30-year legitimacy on alerting the corporation on the misdeeds of our industry.” Sustainable practices have been part and parcel of the Xuly Bët world, long before fashion became aware of its impact. But that did not pan out.

No matter: he decided he’d stage his show right on their front stoop, even if it meant keeping a lookout for police and guests milling around trying to look inconspicuous until the last moment. Police did come by several times, but their only action was to roll out some barricade tape to prevent overenthusiastic guests from spilling into oncoming traffic.

Plus guerrilla shows are his thing, ever since he famously put on his first 1992 debut just outside the Jean Paul Gaultier show, so that exiting guests could not miss it.

The final show of the spring 2023 season turned into a heartwarming moment that nothing could spoil, not even the Bluetooth boomboxes refusing to connect. The audience provided noise aplenty, with cheering, clapping and calling out of models’ names as they strutted their stuff.

Buses trundled past with their passengers snapping away at the models on the runway as much as any conventional front row. Some guests perched on green wheelie bins to get a better look and cheered from their high spot. “Wilde” said the neon sign in a street level window of the gallery serving as backstage — and the moment was.

Out came the full Xuly Bët playbook of bodysuits; smartly cut blazers; brightly colored pedal-pushers and leggings; pencil skirts worn by all genders, looking feminine and chic or handsome like kilts. All were layered without looking bulky, as evidenced by models dancing at various points during their passage.

The looks were sported by an eclectic group of friends old and new, including Xuly Bët chief executive officer Rodrigo Martinez; fashion collector Michelle Elie and her sons; the stylist Jenke Ahmed Tailly, who worked with Beyoncé and Kim Kardashian; French influencer-turned-designer Jeanne Damas, and even a server from a bar near their latest pop-up store, whispered one guest familiar with the brand.

“Lamine is love,” said a long-standing model who had already walked for Badian Kouyaté since the ’90s. A sentiment echoed by Damas, whose mother was an early Xuly Bët customer. “What I adore is his love of women [in his design]. When you walk on the Right Bank with him, he says hello to everyone, everyone comes to kiss him,” she said.

In lieu of a traditional finale, the cast came back out wearing all-white ensembles, some livened up with topstitching, the Xuly Bët “Funkin’ Fashion” stamp or various logos in red, preceding Badian Kouyaté, who emerged with his fist raised.

His label may be 30 this year, but Kouyaté has lost nothing of the counterculture stance that burst onto the Paris scene when he made his debut in 1992.

He cautioned the Climate Academy sages that “you can’t sit among yourselves, sipping your organic tea,” telling them to “ask the right questions.” He had just as much to say about how expensive it is to show a collection in Paris, remarking how independent or emerging designers were priced out.

“Xuly Bët means ‘opening the eyes’ [in the Wolof language] so open your eyes, nothing is neutral. We can all live together. Not just leave some on the sidelines,” he said, reeling of five-figure prices for oft-used Paris venues.

But when asked if he was angry, he said he wasn’t, explaining that he was speaking up out of love for future generations — on both topics. It brought to mind a Jimi Hendrix lyric he’d quoted in an earlier season: “When the power of love overcomes the love of power, the world will know peace.”