It's Monday afternoon and Yael Aflalo just got into New York from her home base in Los Angeles. That same night, she was flying to Hong Kong to meet with her manufacturers. She's certainly busy, but not at all stressed. At least she doesn't seem to be. 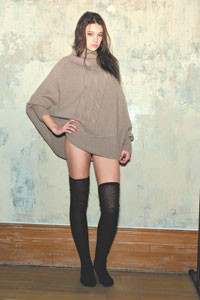 It’s Monday afternoon and Yael Aflalo just got into New York from her home base in Los Angeles. That same night, she was flying to Hong Kong to meet with her manufacturers. She’s certainly busy, but not at all stressed. At least she doesn’t seem to be.

“I’m tired, but also very excited about what’s happening,” Aflalo said, sitting in her new New York showroom at 80 West 40th Street. The showroom has exposed brick and large windows with a view of Bryant Park, and is furnished with modern furniture and shiny silver fixtures. “I wanted the showroom to be very calming with a feeling of home.”

Aflalo’s contemporary line, YaYa, which has been around for almost nine years, and her younger, more casual line, Love, have matured. YaYa is now focused on cozy knitwear with the occasional silk printed dress or leather jacket in the collection. Love has become known for its comfortable, but still fashionable, sweats and T-shirts.

Aflalo’s business as a whole is about to have a big year. Not only has she hired Commune, a Los Angeles-based design firm, to help her design a new logo, which now reads YaYa with Aflalo’s signature beside it, she also has signed a lease for her first freestanding store on Melrose Avenue in Los Angeles. A fall opening is planned for the shop, which Commune also will design.

“The retail concept will mirror the look and feel of the New York showroom,” explained Roman Alfonso, managing partner at Commune. “As for the brand identity, that is coming from Yael directly. She’s very well-rounded and well traveled with an easy, bohemian spirit about her, so the logos, the designs, they all come directly from her own personality.”

Alfonso said the new Love logo, which has a small graphic rabbit on the tag, is playful, but also sophisticated.

“The clothes are meant to be playful, but with that look of sophistication,” he said. “So the logos reflect that.”

Aflalo said she expects to reach about $20 million in wholesale volume by the end of this year. The YaYa and Love lines are available in high-end specialty stores such as Saks Fifth Avenue, Neiman Marcus, Intermix, Bergdorf Goodman, Planet Blue and Fred Segal, among others. The lines wholesale from $100 to $350.

“I really felt like it was time to reinvent and focus on making this a true collection,” she said. “Nine years ago I was only 21 and I admit that I had no idea what I was doing. I just made pieces that I liked without really thinking about it. But now, I believe I have matured, and so has the business.”