What Happens When the Runway, and Front Row, Vanish?

Designers and brands snapped into action, livestreaming shows, creating films, stepping into the VR and gaming arena and honoring frontline workers during the pandemic.

After years of debating, and bemoaning, the traditional setup of the European fashion weeks — Too long! Too frequent! Too much travel! Too much pressure on designers! Too much waste! — fashion industry figures had no choice but to change, quickly.

All of a sudden everyone was at home, shops and factories closed, and designers delayed their collections by months, showing them virtually or in socially distanced shops and showrooms. Seasonal showcases morphed into one another, fashion weeks went digital and designers combined, extended or delayed showing their collections, with some spring 2021 outings debuting now, two months after they usually would.

Sustainability, diversity and inclusion came to the fore, too, with designers taking a look at how they work, and what their brands consume on a seasonal basis. Deadstock has become the hottest fabric in fashion.

Cozette McCreery, who cofounded The Emergency Designer Network, which made surgical gowns and scrubs for U.K. medics, said the crisis has given us time to slow down, question our output, source locally (mostly out of necessity) and realize that we can, and should, be more collaborative, more supportive and more accountable.

Here, a look at how Europe’s three major fashion cities rapidly adapted their show formats to suit the new mood.

Physical fashion shows were probably the most surprising and bold statement made by a number of emerging and heritage brands in the French capital, earning those that dared impressive returns on social media.

Simon Porte Jacquemus was a first mover in July, carving a snaking path — and socially distanced seating — out of a wheat field for his sunset spring show.

Dior, which erected a giant tent atop a fountain in the Tuileries, punctuating the vast space with stained-glass windows, was the the top-ranking brand for the September/October market in terms of Media Impact Value, as tracked by Launchmetrics. Next in the ranking were Louis Vuitton and Chanel. The three brands were among the 18 houses that held runway shows, albeit with drastically reduced guest lists. 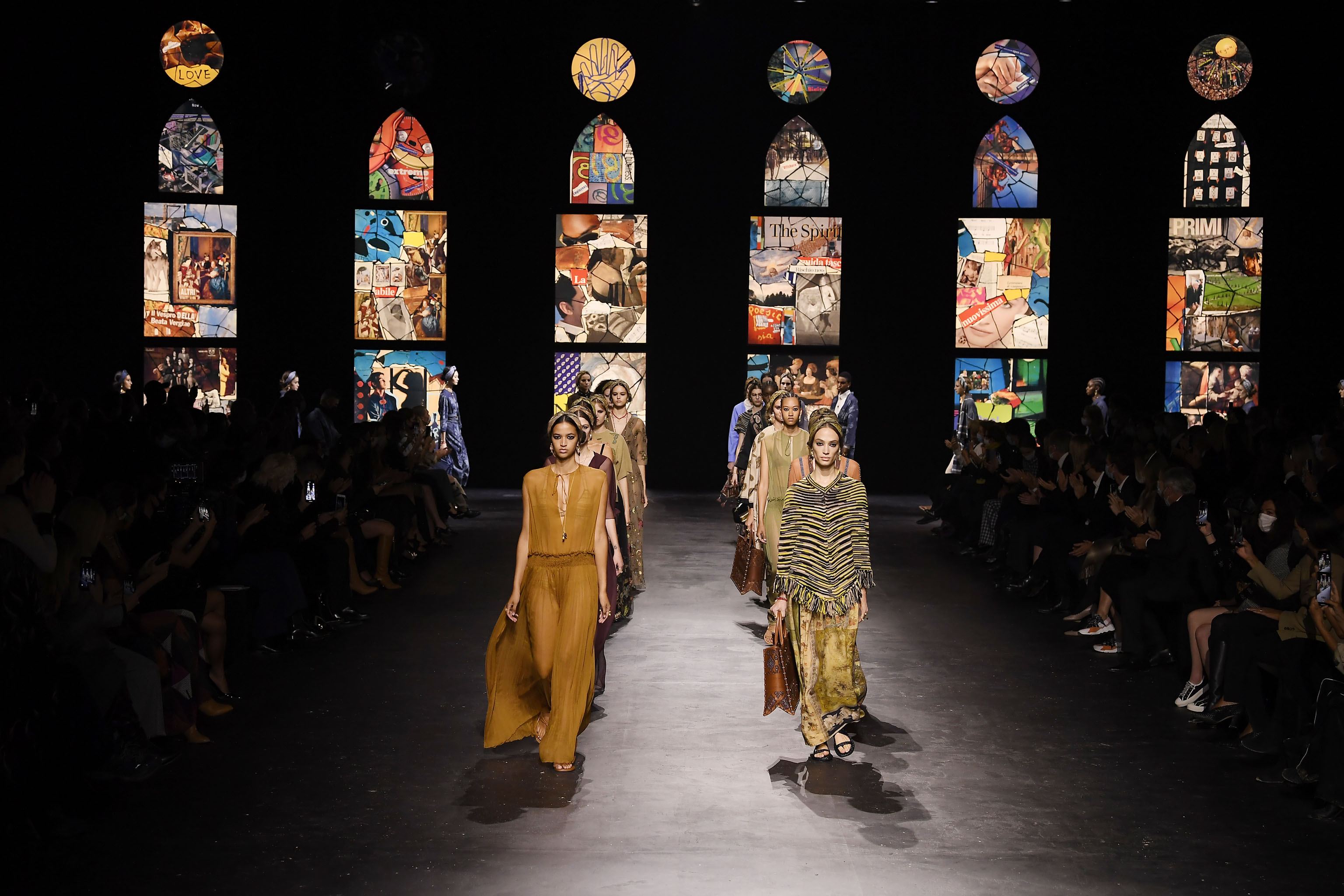 ListenFirst found that Chanel and Louis Vuitton topped the chart for social engagement, while Balenciaga rounded out the top three with its fashion film that featured models whisking through rain-slicked Paris streets lip-synching the Corey Hart earworm “I Wear My Sunglasses at Night.” The others, in descending order, were Balmain, Givenchy, Loewe, Hermès, Kenzo, Chloé and Miu Miu.

Behind the numbers were many memorable creative solutions — including ones addressing the lack of celebrity hubbub that usually accompanies runway blowouts. 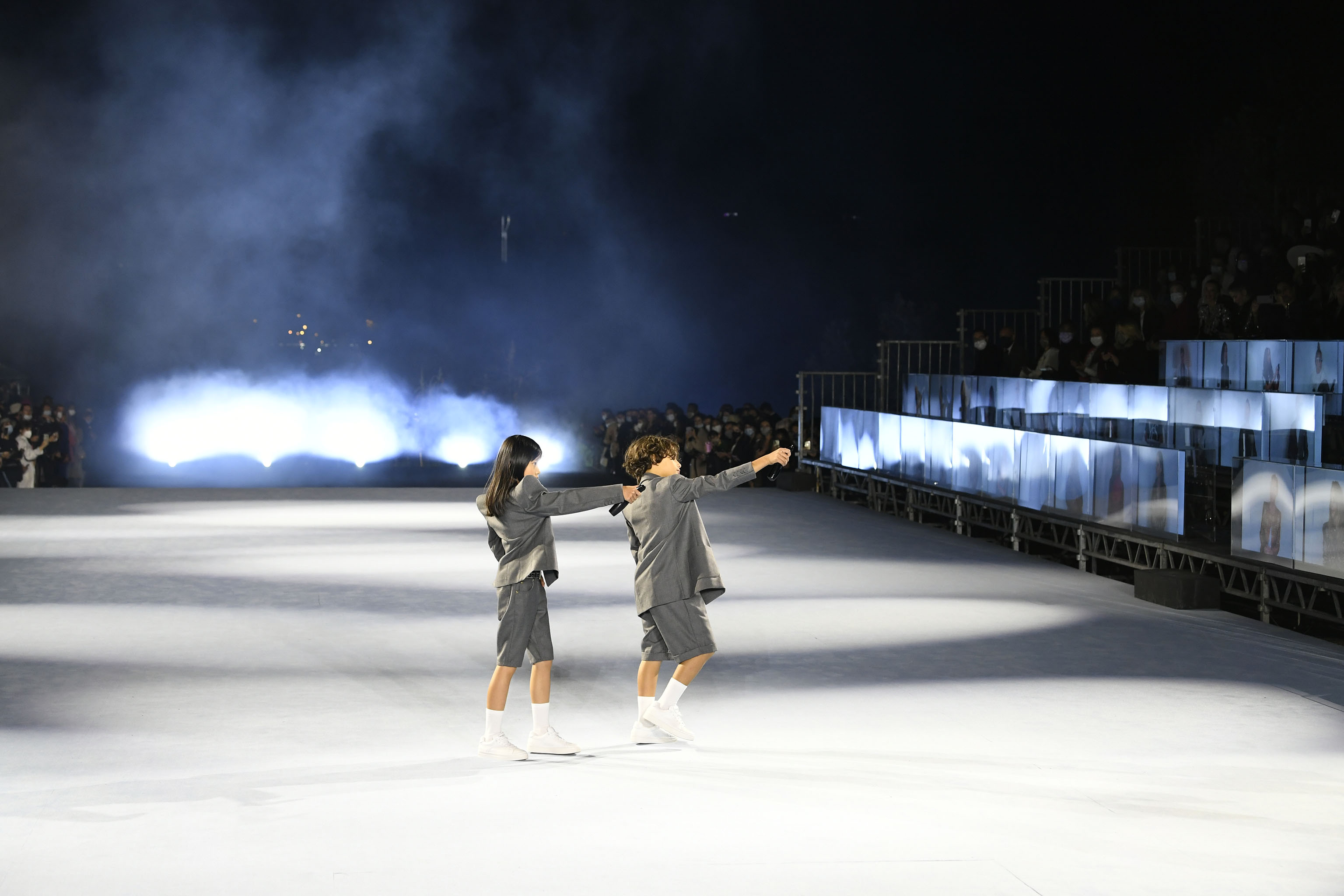 Louis Vuitton took a different approach for its physical-meets-digital show at 19th-century department store La Samaritaine, interspersing generously spaced front-row seats with a fish-eye camera propped on a pole. They could be controlled remotely by celebrities, influencers or editors around the world, with green screens in the space broadcasting extra content.

To be sure, the pandemic upended the idea of a passive fashion audience plunking down to watch models walk by. For his Loewe collections, Jonathan Anderson dispatched boxed collections containing wallpaper and glue, pop-up runway sets, construction-paper sunglasses, and even a 45-rpm record to be spun with a finger on a cardboard player.

Balenciaga’s video game for its main fall collection, which debuted online in early September, required viewers to race against the clock through dystopian cities and fantastical forests. Viewers could inspect models in cool NASA parkas, trapeze hoodies and blown-out jeans from all angles — at the risk of running out of time.

Christian Louboutin constructed an idyllic, cartoonish Loubi World on social gaming app Zepeto for the reveal of his spring 2021 collections. Avatars could earn coins during gaming sessions to spend on virtual shoes and bags.

The runway became a thing of the past, with designers forced to find alternatives as a result of lockdowns and dwindling budgets. They stripped their formats back, and invited small numbers of press and buyers to their offices, retail stores or gallery spaces to showcase their spring 2021 collections.

That move created space for more intimate conversation — gone were the days of the backstage crus, the small talk and air kissing. Instead, hot topics were the health of people and their families, how to cope with financial distress and the power of creativity.

It’s no surprise that art became a bigger part of the post-lockdown fashion week formula.

Victoria Beckham took over the Victoria Miro gallery in East London and displayed her collection of slinky knits and easy tailoring against the color-splashed works of Danish artist Tal R, while Simone Rocha created a makeshift art installation of her own, with an army of models clad in puff-sleeved, pearl-encrusted monochrome dresses taking over the ground floor of the Hauser & Wirth gallery on Savile Row.

, who transformed his Mount Street store into a gallery showcasing a small series of hand-painted dresses next to the bright, abstract, glitter-covered paintings that he created as a way of handling his emotions.

“I’m back to my instincts and what feels right, not complying with what the industry expects — which is a false economy. I’m doing what I want to do and you might like it or you might not, but we can’t make everyone happy, which was the challenge we tried to [tackle] before,” Kane said of his decision to show a non-commercial collection and turn his shop into a gallery. 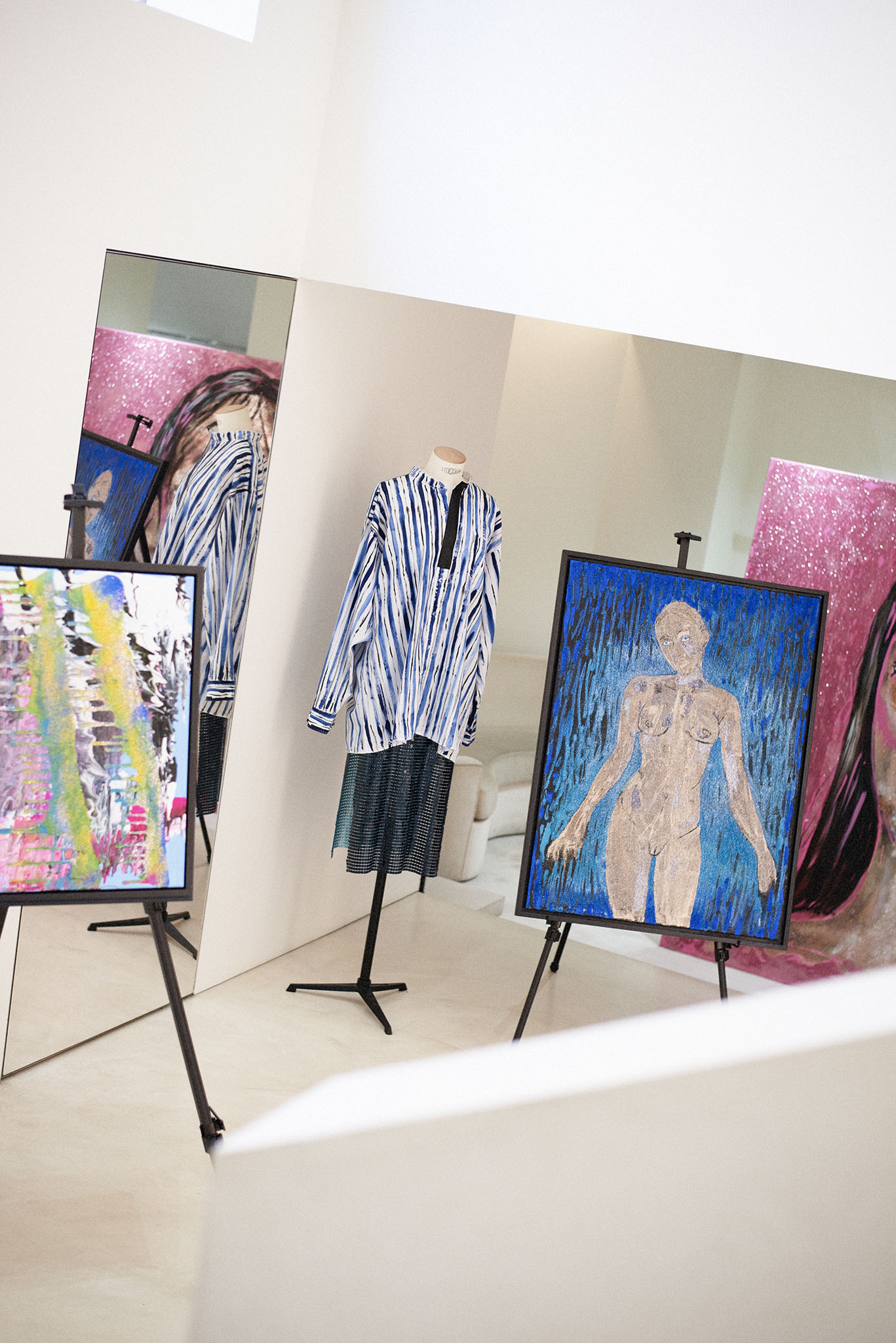 Bottega Veneta held a small, socially distanced show which it filmed and later distributed. Daniel Lee also tapped the German conceptual artist Rosemarie Trockel to create a book of photographs and reflections on clothing, style and coming of age called “The Importance of Wearing Clothes.”

Burberry was one of the few British brands to opt for a runway show, and did so virtually from a birch tree-filled park outside London. The show was livestreamed, there was no audience and art came in the form of a live performance piece by German artist Anne Imhof. During the event, models strutted spring 2021 graffitied trenchcoats, crystal-embellished dresses and slim tailoring.

Other designers questioned the power of the runway, and showed their collections on screen.

David Koma took over a huge tennis court outside London and filmed his models walking in the same way they would have on a catwalk. There was party music, flashing lights and Shanina Shaik strutting her stuff. Koma took a triumphant bow at the end and guests felt as close to the front row as ever. 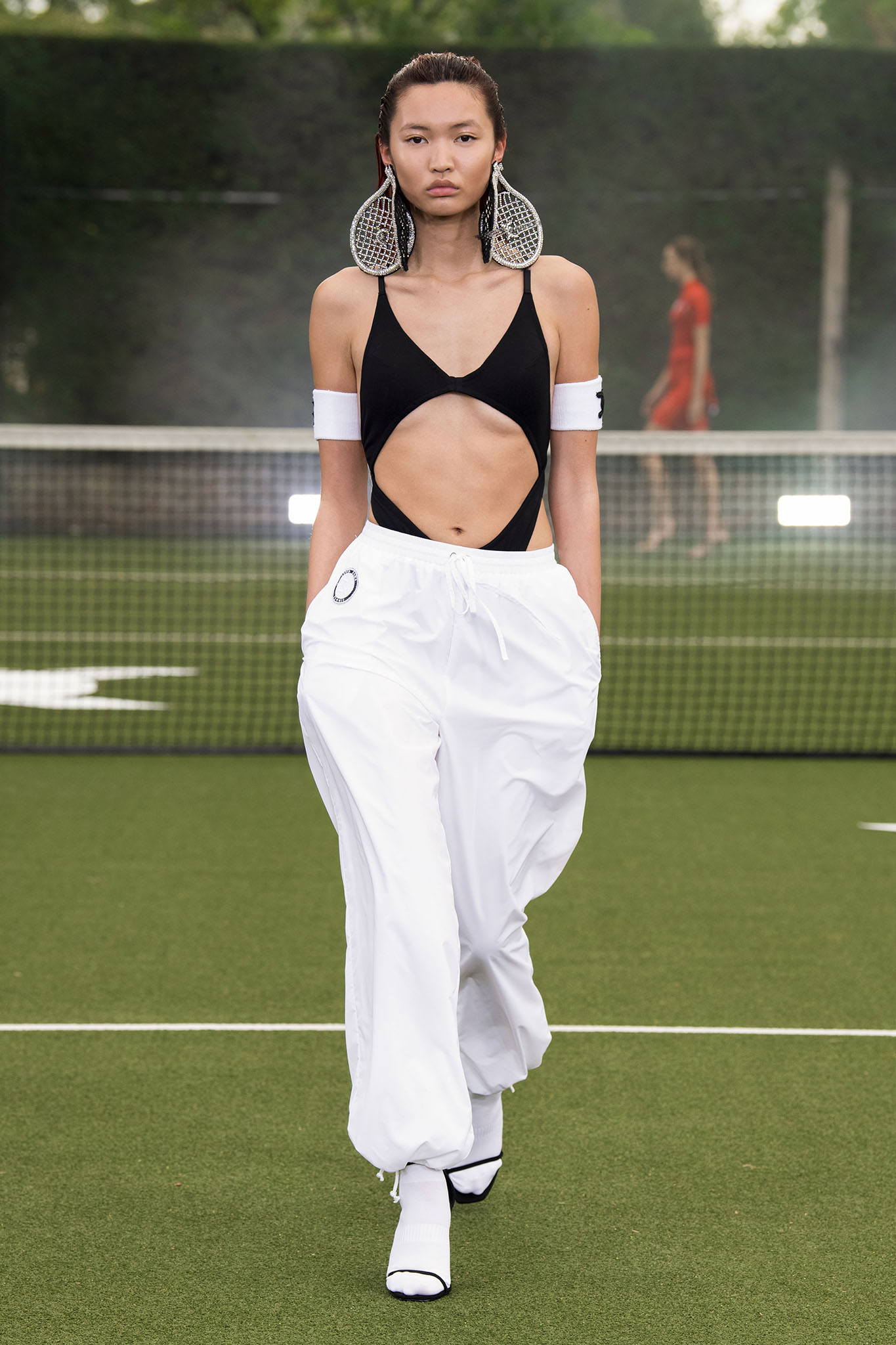 Molly Goddard, Edward Crutchley and Emilia Wickstead opted for a similar format, mimicking the catwalk experience on screen. The format worked better than the usual complex, and often abstract, film narratives that often push the clothes to the sidelines.

Michael Halpern’s heart-warming digital presentation featured British frontline workers wearing his sparkly, larger-than-life creations earned him a Fashion Award. Paria Farzaneh, meanwhile, took to a farm outside London to present her collection. Models walked in military-inspired looks against a series of explosions and fireworks. Her aim was to shake up her audience and make them “feel, smell, hear and taste” people’s struggles.

The pandemic stimulated Italian designers’ creativity — at times even prompting some to completely rethink the timing or names of their collections. In July, on the last day of Milan Digital Fashion Week, Gucci’s Alessandro Michele presented his Epilogue collection as a visual narrative feature, livestreaming it for 12 hours on several digital platforms worldwide.

In November, Michele went as far as codirecting, with Gus Van Sant, seven episodes to present his new collection over seven days during a digital fashion and film festival known as GucciFest. It featured friends of the house, including Billie Eilish and Harry Styles.

Designers were attracted by the outdoors and natural landscapes, escaping from the confines of prolonged lockdowns.

Ermenegildo Zegna’s artistic director Alessandro Sartori chose the company’s headquarters in Trivero as the background of the brand’s first phy-gital event, with a livestreamed runway show in July, where models walked in different locations, including the factory floor, the archives and the forests of the Oasi Zegna. 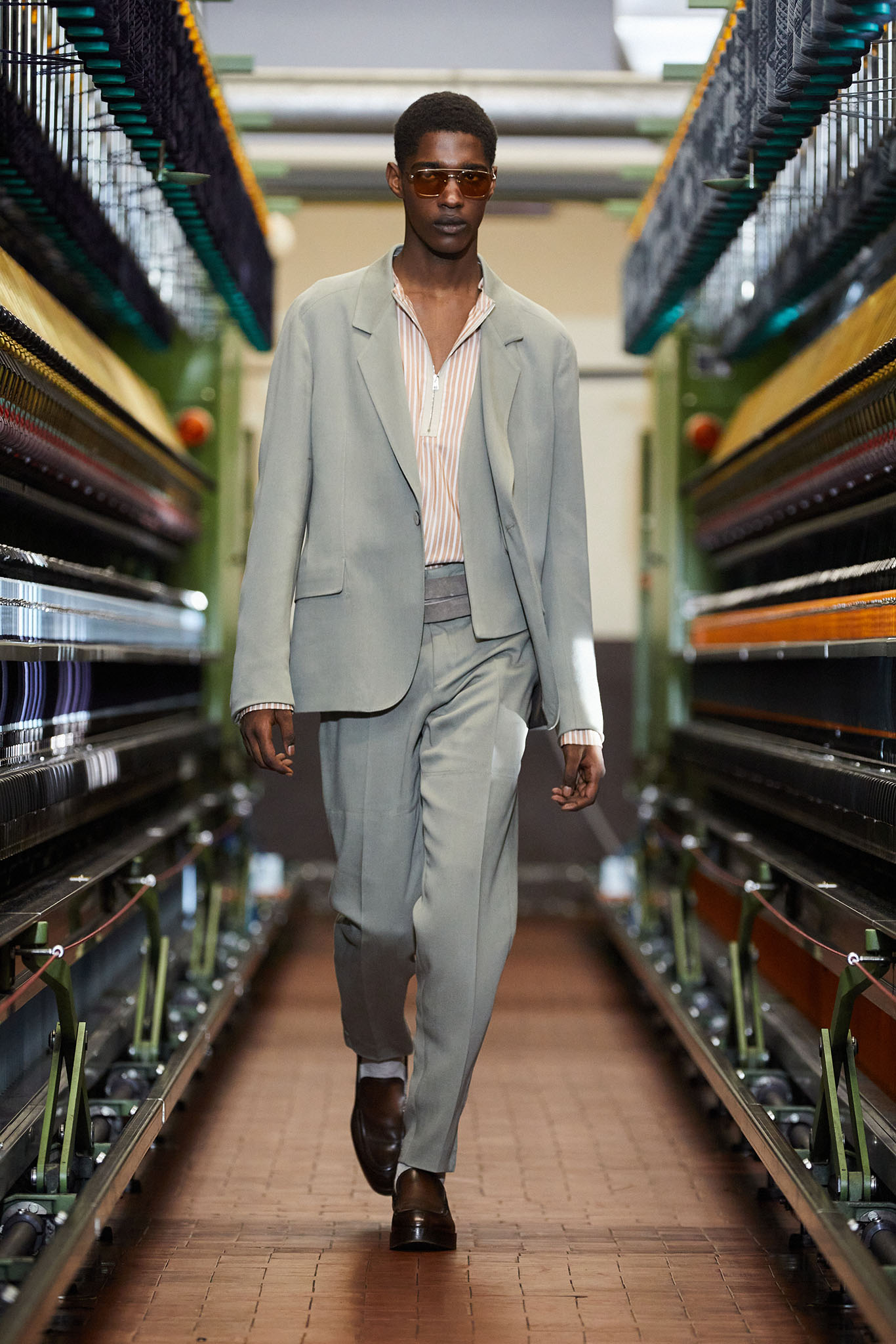 Engadin in the Swiss Alps and Tuscany’s Maremma beaches served as the backdrop in the spring 2021 videos produced by Plan C and Ermanno Scervino, respectively.

For her resort 2021 collection, Alberta Ferretti showed her love for Italy with a video that showcased the beauty and opulence of Italy’s squares and streets. Images of models strutting down an imaginary catwalk were superimposed on footage of Venice’s San Marco square, Milan’s Galleria Vittorio Emanuele II and Rome’s Fountain of Trevi.

For Ferragamo’s pre-spring collection, models were filmed at Tuscany’s luxury resort Forte dei Marmi and at a villa in the nearby Ronchi village. In September, in a new development, Ferragamo presented its spring collection in Milan with a live show as images from Luca Guadagnino’s ad campaign, shot in Technicolor, appeared in the background.

Tod’s creative director Walter Chiapponi decided to focus his video on the artisans at the company’s headquarters in Brancadoro, Italy, chronicling the process from design to manufacturing and the final fashion shoot, for the brand’s pre-spring 2021 women’s collection.

In September, Prada opted for a digital presentation for her first show co-designed with Raf Simons, which was streamed on the label’s site and on its social channels. At the end, the company live-streamed a conversation between the two designers, who answered questions from the audience.

The digital medium is also helping brands to reach a younger generation. Emporio Armani’s short movie involved a cast of young talents who moved and danced across an imaginary city. Directed by Manuel Emede and Nicolò Cerioni, the video featured strategic cameos of a range of Netflix stars including Omar Ayuso from “Elite,” Najwa Nimri from “La Casa de Papel,” Miguel Angel Silvestre from “Sense8,” Rocco Fasano of “Skam Italia” and Alice Pagani from “Baby,” who has also fronted ad campaigns for the brand’s fragrance business. 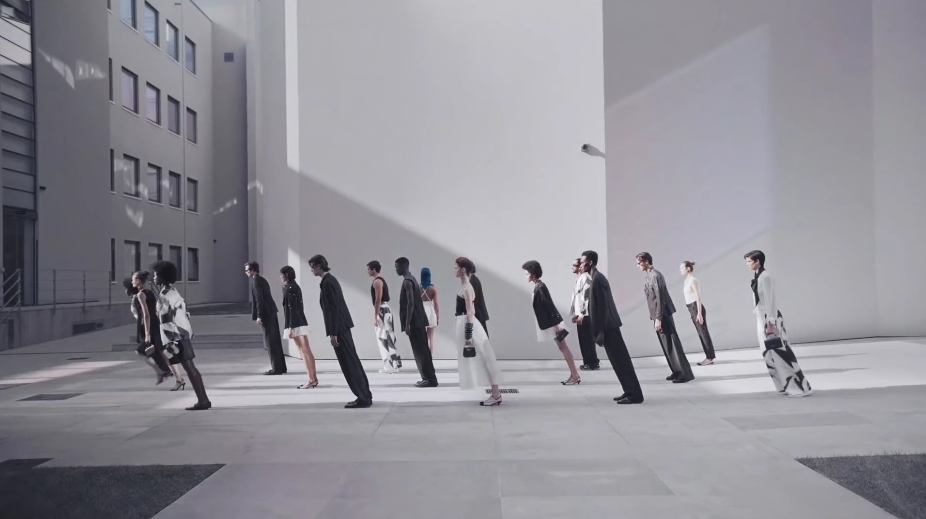 In July, MSGM released a candid short movie in which a range of young women were interviewed on everything from childhood memories to their idea of what love is. Self-acceptance, inclusivity, freedom of expression and self-awareness all mingled in a simple and pure way, best conveying the youthful message of the brand and the video was a social media hit.

Simone Rizzo and Loris Messina of Sunnei played with technology to develop avatars of male and female models dancing to the tune of Nineties’ Latin pop hit “Macarena” while GCDS stepped in the VR and gaming arena and partnered with top digital players, comprising the “godmother of virtual reality” Nonny de la Peña, and her tech firm Emblematic Group.

Dubbed “Out of This World,” the virtual show featured a digital cast of shiny and doll-like avatars of different body shapes and colors – including green aliens – in addition to avatar versions of Dua Lipa, Anwar Hadid and Chiara Ferragni sitting front row.

Jeremy Scott turned to Jim Henson’s Creature Shop to bring his Moschino collection to life in miniature on 30-inch marionette models who strutted down a runway under the eyes of marionette-versions of Anna Wintour, Anna Dello Russo and Hamish Bowles, among others.