Last year represented a turning point for the brand with cut-and-sew debuting at Barneys and now begs the question of what’s next for the Los Angeles label.

LOS ANGELES — “Rats Die Slow” reads the back of one 4Hunnid T-shirt.

The message needs no explanation rapper YG (né Keenon Daequan RayJackson) said about one of the pieces from his brand 4Hunnid’s summer capsule. The recently released collection of mostly T-shirts and a pair of basketball shorts is a nod to summer and beautiful women, he went on to say as he described the items.

“It’s really just representing our lifestyle during the summer,” he said. “When summer hits, a lot of people do a lot of things and they plan a lot of trips. I wanted to make a capsule based around pretty females.”

Most of the pieces bear phrases the music artist said represent the lifestyle of “having a good time, being real, being authentic, enjoying yourself, chasing your dream and getting your money.” The capsule debuted at an event Thursday evening that included a gallery-like installation of photos from the capsule’s look book imagery.

4Hunnid, also the name of YG’s record label under Interscope, started in early 2016. It largely won a following as artist merchandise but that changed last year with the introduction of a cut-and-sew collection that made its debut at a star-studded fashion show that drew Russell Westbrook and Sean Combs amid a set that re-created a Compton neighborhood. The collection then launched to the market at Barneys signifying a turning point for the brand, its positioning in the market and a look at its longer-term aspirations to be a fashion label.

When YG first heard the news of Barneys, he thought someone was playing a joke on him, he said. 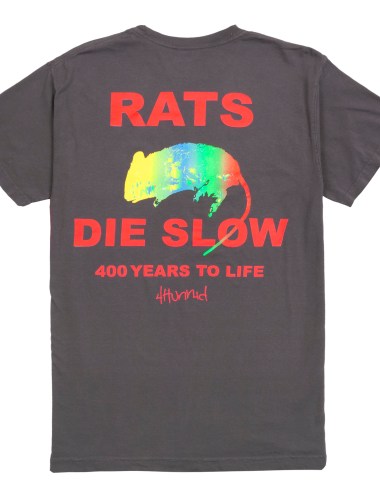 He recalled the meeting with the retailer’s team in New York, walking through the doors and seeing Barneys workers wearing items from 4Hunnid.

“When I saw that,” he said, “I thought anything is possible, especially when you got a connection to people.”

The brand last year made its debut at ComplexCon setting up a South Central swap meet-inspired booth with collaborations with Pro Klub and New Era, along with 4Hunnid jewelry.

“That’s what 4Hunnid is all about — where we can give people that real experience and present it at this level,” said 4Hunnid creative director Gavin Mathíeu at the time of ComplexCon.

That’s really the point for the brand as it continues to look to scale on its own terms. It wants to bring the references of Compton and South Central to a premium fashion brand.

“The people that take the biggest hits are the ones that chase the trend,” Mathíeu said. “We stay pretty rooted in our vision and don’t really subscribe to any one genre so this relationship with these fans it’s authentic and will stand the test of time.”

YG said the line is currently in more than 200 Zumiez doors and the company is currently in talks with other retailers and also has a number of collaborations in the works. The line is also sold through the 4Hunnid online store.

Another fashion show akin to last year’s is being mulled, but as YG readies to go on tour starting next month, he recognized planning something in Los Angeles could be difficult, but offered it could very well happen in another city.