ACTIVE: Interest in activities such as yoga, Pilates and running are sparking activewear and outdoor apparel sales at sports stores and fitness centers. 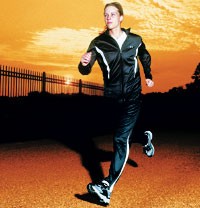 NEW YORK — Growing interest in activities such as yoga, Pilates and running are sparking activewear and outdoor apparel sales this fall at sports stores and fitness centers.

Shoppers are scooping up performance fabrics, bright colors and stylish looks they can wear for their fitness activities and beyond.

“It is now totally acceptable to wear what you had on in yoga class to lunch with your friends, take your children to the park or to do errands,” said Equinox Fitness buyer Marian Baker, who joined the fast-growing chain in June. “Many of our customers tell us that they wear workout tops out at night because tops frequently are sexy and supportive.”

Women’s apparel sales have been outpacing men’s at retailers including North Face, and merchants such as Dick’s Sporting Goods, Niketown and Athleta said their apparel sales are healthy this season, especially as the weather turns colder and people resume their fitness routines.

“Fall is when people come back to the gym after a summer away, and we see an upward spike in sales,” noted Aimee Morris, Crunch’s director of retail.

Many stores beefed up their private label offerings this season, reflecting an ongoing industrywide trend to proprietary brands, which usually have higher margins. At Crunch, for example, private label now accounts for between 25 and 40 percent of total inventory, depending on the location, said David W. Bell, the company’s vice president and corporate controller.

Nike has seen a strong reaction to its “Speed” global marketing campaign in its company-owned stores, said Tim Hershey, general manager of Niketown. “[Speed] has generated tremendous brand heat in both the performance and lifestyle segments that helped propel Nike to its most successful fiscal quarter in company history,” he noted. “The fall season has met our expectations and generated a lot of excitement with our consumers.”

The Speed campaign crossed regions and categories, and was the company’s most integrated brand effort to date. He said top sellers this season have been nation-themed apparel as well as performance footwear.

While the company-owned stores are a small part of Nike’s overall business, they are key to testing new merchandise. There are now 13 Niketown stores and 2 NikeWomen stores.

At Athleta, the fast-growing women’s activewear catalogue and Internet merchant, top sellers are merchandise in colors such as orange, green, blue and purple, and in the company’s private label Athleta brand business, which now accounts for 55 percent of overall sales, said Tami Anderson, marketing director for Athleta Corp. Fall sales have been above plan, and the company has introduced more accessories and a wider selection of lifestyle items designed for après-sport.

“For us, sales are being driven by a combination of color and style as well as the fact that we offer several items that are unique in the marketplace, particularly with the products we’ve developed ourselves, which can’t be purchased anywhere except through Athleta,” Anderson said. “We’re also seeing interest in unique and novelty items.”

Equinox Fitness sales this season are running 20 percent ahead of last year, according to Baker. Under her direction, the company has shifted its merchandise approach and is now carrying more fashion-forward items such as knit ponchos, cargo pants and Puma accessories. Baker said she is approaching the store in the same way that boutiques approach their merchandise, buying more seasonally. She has pumped up offerings of fashion brands such as Velvet, Hard Tail, Splendid, Michael Stars and Sanctuary, and in coming months, labels such as Ella Moss, Adidas Originals and Fred Perry will be added to the mix.

“It is becoming more and more obvious that Equinox needs to be in line with what our consumer sees in other upscale stores,” said Baker, who formerly held buying positions at Bergdorf Goodman and Saks Fifth Avenue and also was a sales executive at Vera Wang. “We have seen this with the overall success of our fashion items and lines, as well as with customer feedback and requests.”

The company now has stores in 21 of its 22 gyms across the country, with facilities planned to open in Santa Monica, Calif., and in San Francisco in December. Equinox has aggressive plans to open up to 11 gyms and shops next year, Baker noted. The company is also stepping up its efforts on the marketing front. “We are doing a holiday mailer for the first time,” Baker said. The mailer will feature both women’s and men’s apparel and accessories, and about 50,000 will go into circulation starting at the beginning of November.

Reebok this fall has focused on the fitness part of its business, said Lori Rose, category business director for women’s apparel. Among strong sellers are a cotton/Lycra group with patterns and yarn-dyes, and a waffle fleece collection in colors such as gray and pink. Other stand-outs have been the European-inspired classic heritage line, which has more fashion-forward styling, Rose noted. The company has two Reebok stores and two RBK stores.

Crunch, the fitness center that is now a division of Bally Total Fitness, is seeing strong sales of technical and hard-core workout apparel and fewer sales of fashion-forward apparel, noted Morris. Marika, Puma’s performance wear and Everlast have been selling well, in addition to the company’s private label, she noted. Crunch has 24 gyms, 22 of which have retail locations, as well as a retail outlet in Marshall Field’s in Chicago.

At Finish Line, the mall-based athletic retailer with about 580 stores, apparel sales have been on plan this fall, said company president Glenn Lyon. The company’s apparel business accounts for about 22 percent of sales and consists of licensed products such as jerseys, branded merchandise and private label. While licensed jerseys have been robust sellers in recent seasons, the company is seeing a shift back toward branded merchandise, he said.

“Our women’s business has been very strong and continues to grow as a portion of our business,” Lyon said. “The greatest successes have been with brands such as Nike and Puma and fashion performance. We believe the branding part of our business will continue to increase.”

Under Armour and other performance fabrics have been a standout at Dick’s Sporting Goods, said a company spokesman, although he declined to give detailed sales information. “For us, it’s more about authentic athletic and activewear and less about fashion,” he said.

While the ski selling season is just getting under way, Princeton Ski Shops in Manhattan is already seeing robust sales of North Face, Spyder and Burton products, said manager Steve Townsend. “Spyder in particular has been generating a lot of interest lately,” he noted. Spyder was purchased earlier this year by Apex Partners, and its distribution is being expanded.

Women’s apparel now accounts for about half of overall sales at the store, and women’s sales have been strong for brands including Columbia, Nils and Bogner. “We also just got Under Armour and have already starting selling that well,” he noted.

At North Face, which is owned by VF Corp. and now has eight company-owned stores, sales this fall are running ahead of last year and are above plan for this year, said Dave Sweet, vice president of retail.

“Our lightweight knits are performing well, even at higher price points,” he said. “We find the active consumer will pay for better performing garments and fabric features such as stretch fabrics and seamless construction. Outerwear remains our largest category, especially fleece, soft shells and insulated jackets. Many of our traditional styles, such as the Denali fleece and the Nuptse jacket, continue to sell well, and our Apex thermal jacket is an example of a strong-selling soft shell.”

The company is also doing some new marketing activities this season.

“We are not a highly promotional company, but we ran a back-to-school promotion for iTunes downloads during August and are featuring a Snowsports lift-ticket promotion this month together with several premier ski resorts,” Sweet added. “Our idea is to provide additional value to our customers rather than price reductions.”