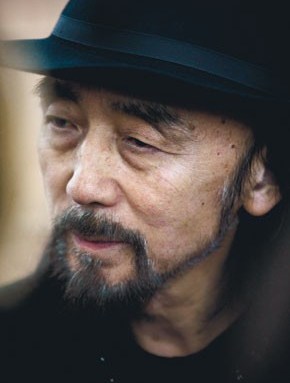 “China’s population is beyond my imagination: rich, brilliant, pure, so many,” Yamamoto told WWD at the show’s after party at Tian Di Yi Jia.

“I love young designers, and the film director Wang Kar-wai, and young contemporary artists,” he said, singling out for praise the young “antifashion” designer Ma Ke.

The catwalk show and opening party were staged at the Workers Cultural Palace, an eastern addendum to the Forbidden City that formerly was the Taimiao hall of the Ancestral Temple. Built in 1420 during the Ming Dynasty, it traditionally has provided the setting for imperial and state funerals, and today is a public park and activity center for retirees. Starting in 1998 with Zhang Yimou’s $15 million production of “Turandot,” the government has provided it as a backdrop, allowing high-profile events to claim the prestige of the Forbidden City without attracting popular ire by opening the actual palace to commercial and foreign events.

The 58 designs Yamamoto showcased Thursday were auctioned Saturday at the Beijing Hotel by Sotheby’s to raise funds for the Yohji Yamamoto Fund. The line will sell in China through the Joyce and I.T boutiques, although Yohji Yamamoto Inc. is looking to open freestanding Mainland shops in the next few years.

Cooperating with the Chinese government’s Chinese People’s Association for Friendship With Foreign Countries, the fund aims to foster creativity among young Chinese fashion designers. Starting in 2009, it will annually select and sponsor one Chinese design student for two years of continuing education in Europe or Japan and one female Chinese model to make her debut at Paris Fashion Week.

“This is my personal foundation, and then the Chinese government foundation. It’s nice. We got married,” joked Yamamoto. “And then we’re planning to choose a student who is dreaming about fashion design, and a fashion model. We’re going to help them.”

A Yamamoto spokeswoman admitted many details of how the fund will operate, from who will sit on its committee to the selection requirements for its recipients, remain in the early planning stages, and the evening’s focus was to provide a glamorous, high-profile launch.

“I can’t say I’m looking for [anything particular], I’m just waiting and hoping I can see and I can meet and I can talk to very ambitious young kids,” explained Yamamoto. “And then I’d like to talk to them, maybe not only through the foundation, but I’ll come over to Beijing or Shanghai to give a lecture.

“In China, they must have so many angry young people. Being a fashion designer or an artist, you have to be angry,” Yamamoto added.

However, the anger of young Chinese has a propensity to boil over into nationalistic and xenophobic actions. While many of these are frequently aimed at Japan, there have been widespread demonstrations in China recently against France and discount retailer Carrefour over perceived support for the Dalai Lama and Tibet.

The Chinese government and media maintain Japan has never adequately admitted or apologized for its invasion and brutal occupation of China before and during World War II. Seemingly minor incidents where Japan is perceived as behaving condescendingly toward China sometimes result in massive anti-Japan protests here.

Nonetheless, Yamamoto expressed his hope that his nation and China can move beyond their long-standing antipathy, and that his Beijing show and the foundation can provide a nudge in that direction. “This is about my personal story, my life story,” the designer said. “It is the time to talk about that. It’s not very political, it’s very personal.”