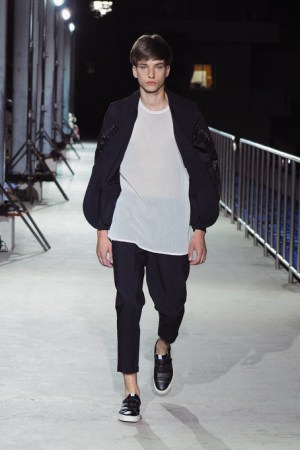 The designer staged his show, held a full three months before Tokyo Fashion Week, at the city’s rugby stadium. Aside from a live percussionist who had to compete with the chants from fans at the neighboring baseball stadium, the event seemed a bare-bones production with uncharacteristically simple styling.

Kubo sent out sporty shorts, tank tops, sweatshirts and updated suits, many of which featured metallic trim. Suit jackets featured gold tweed detailing or collarless necklines, while pants were slim-fitting and cropped. Prints were scarce, but included an image of crisscrossing black electrical wires on a white or neon orange background. Hawks were another common motif, showing up embroidered onto tapered jeans, appliquéd on satin bomber jackets and printed on blousons.

“I think I had been doing well [at designing clothes] with a lot of prints and that were flashy, but in order to put more of myself out there I started thinking maybe I should make a different kind of clothes,” Kubo said. “So maybe people will think this collection is more simple, but I was thinking from the beginning about [incorporating] interesting details and I started from that concept.”

While the collection was tame and lacked some of the excitement of his past shows, his signature eye for detail and use of high-quality tech fabrics was still on display. One standout piece was a riff on a sporty, hooded warm-up coat, crafted from an iridescent lime green fabric. There was also an impressive flourish to the finale, when fireworks from the baseball game next door erupted as the models made their final pass down the runway.