Three successful young designers with different aesthetics on different continents are all adamant about one thing: success in the future of fashion is dependent on having sustainability built into your brand.

“Sustainability is not a trend, people need to stop thinking of it as a trend….If we can do it, why not the bigger brands?” said Swiss designer Kevin Germanier, 27, who joined Reese Cooper, 21, and Susan Fang, 28, on a young designer panel moderated by WWD style director Alex Badia to discuss ways of working, coping with economic pressures of the pandemic, and leading a new generation in showing and selling their collections in different and creative ways.

A graduate of Central Saint Martins who got his start as a junior designer in the Louis Vuitton studio, Germanier was sponsored by LVMH Moët Hennessy Louis Vuitton to present his first collection during Paris Fashion Week in 2018, and quickly made waves for his avant-garde, color-soaked ready-to-wear using leftover crystals in partnership with Swarovski.

“What we’re trying to do is challenge people’s opinion of what a sustainable brand should look like. It’s not only creating a T-shirt in organic cotton that’s saying ‘stop killing the trees.’ Sustainability can also be glamorous, shiny, feminine, sexy,” Germanier said, adding, “I saw a gap in the market.”

During the pandemic, “I felt it was not sensitive to make a dress out of sequins for 3,000 euros,” he said. “As a designer, it’s our duty to reflect on politics, economics and health, so during COVID-19 I created a collection called Les Essentials. I was really interested in how I could make a T-shirt exciting with my DNA,” he said. For spring 2021, he made a film, using an LED mask to make a lasting impression. 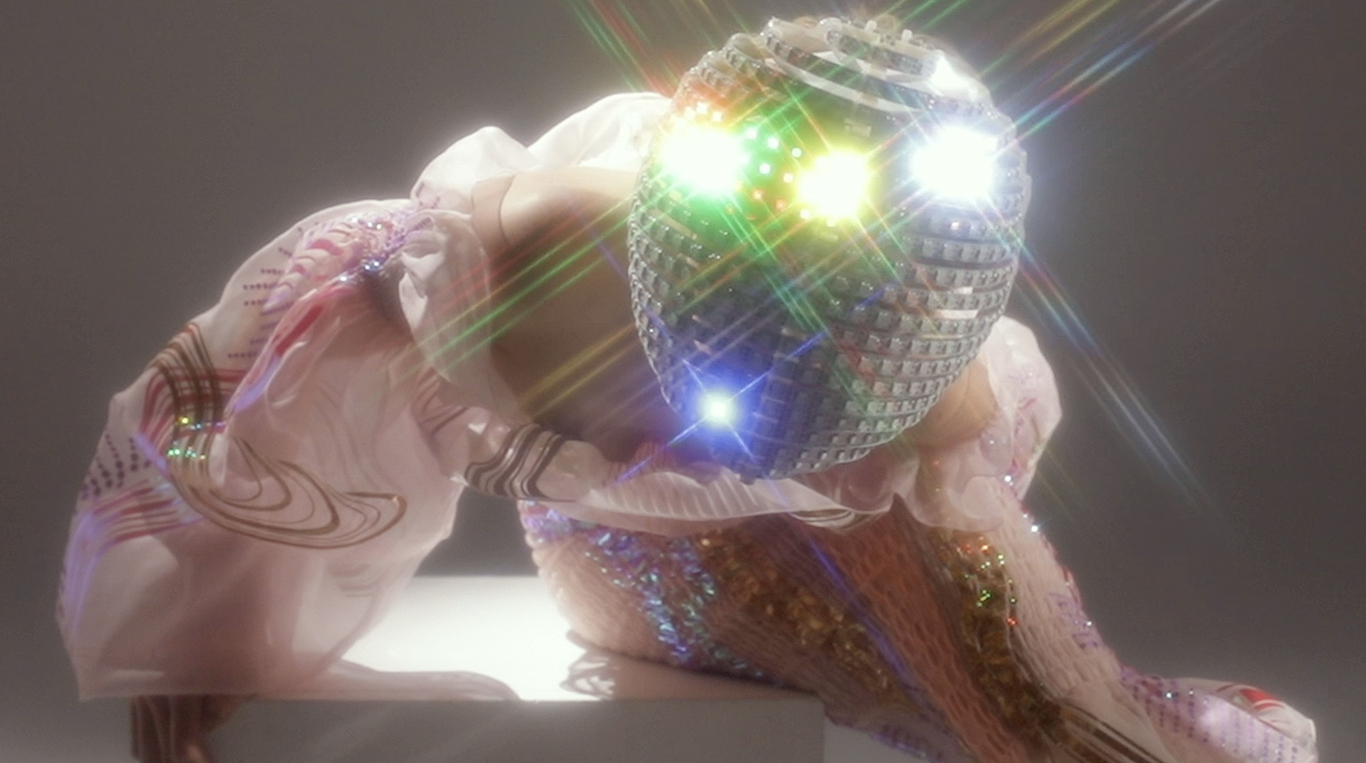 A native of Atlanta who now lives in L.A., Cooper didn’t have any formal training before launching his streetwear brand. “My brand is inspired by outdoor gear, nature and national parks. So it’s finding natural elements to work around, and color palettes inspired by my time in California.” Cooper is partnered with 1% for the Planet, and every item produced is matched with a tree planted in California, specifically targeting areas where the brand shoots its outdoorsy campaigns. “Sustainability is so built into the brand DNA of younger people coming up….It’s going to be just a few years until brands that aren’t done that way are going to be outdated and corny,” the designer said.

Fang also focuses on waste reduction with her mathematically minded, grid like textiles and ethereal aesthetic. “We create an airweave that can be one-size-fits-all, two-dimensional and three-dimensional, and we also create bubble accessories made with recycled crystal glass,” said the designer, speaking from Shanghai. “We are also very experimental in the way we show our collection. We might go on a road trip, or have a contemporary dance or art installation.”

Despite historic challenges during 2020, all three designers have been able to survive — and thrive — with new projects and ways of working, often breaking away from the fashion calendar, which so many in the industry have complained about for so long.

“Flexibility is key and being able to pivot is the only way I got through this year,” said Cooper, who came up with the idea in April to shoot a video on how to sew a chore jacket and sold 1,500 kits with all the supplies, including leftover fabric from canceled orders. “It was fun to see all the people making them at home, no two looked the same, even though there were only six or seven fabrics to choose from.” 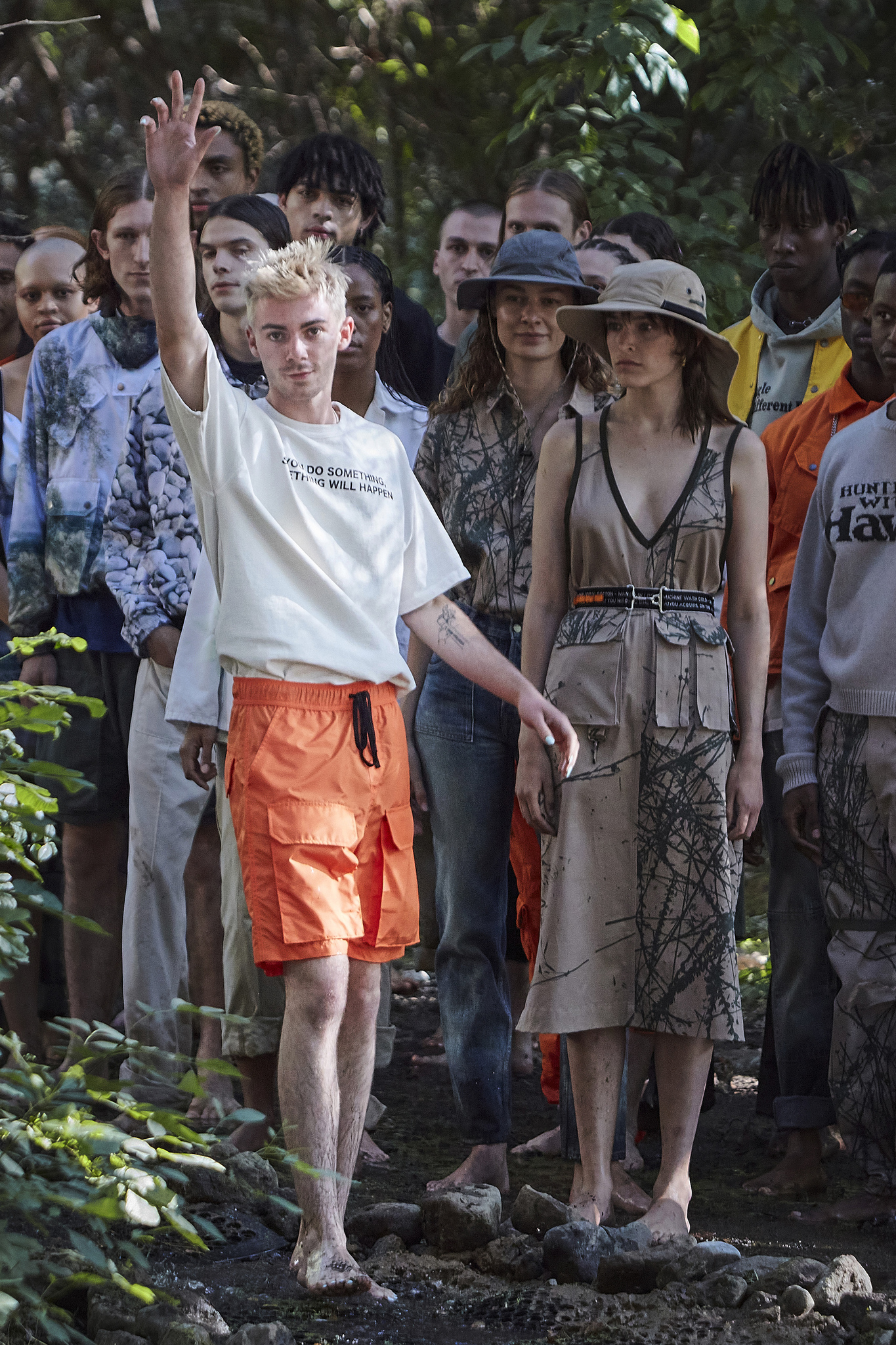 Looking to spring 2021, he wasn’t sure if he should do a full collection. “For me, the most important thing was to double down on what I want to stand for as a brand. So we did a full new collection pushing as if it was any other year, trying to innovate and keep the momentum going. We shot it in the woods in California with models walking through a stream, inspired by lockdown when all anyone wanted to do was get outside and find fresh water to swim in. People can buy T-shirts and hoodies from me all year long, so that wouldn’t have been special. So it was about figuring out next steps and going twice as hard.”

“Because we are a handmade studio that involves my mom, childhood friends, uncles and aunties, we could still hand make at home when quarantine was serious,” Fang said. “We tried to be flexible to what the market was wanting…the European buyers were asking if we had a pre-collection, so we made one in one month….Then we created a main collection and showed it in October. The result was healthy growth.”

For support during the pandemic, all of the young creatives leaned on family.

“Starting a brand is very hard and it’s great to have all these people around; even my childhood art teacher was helping me,” Fang said. 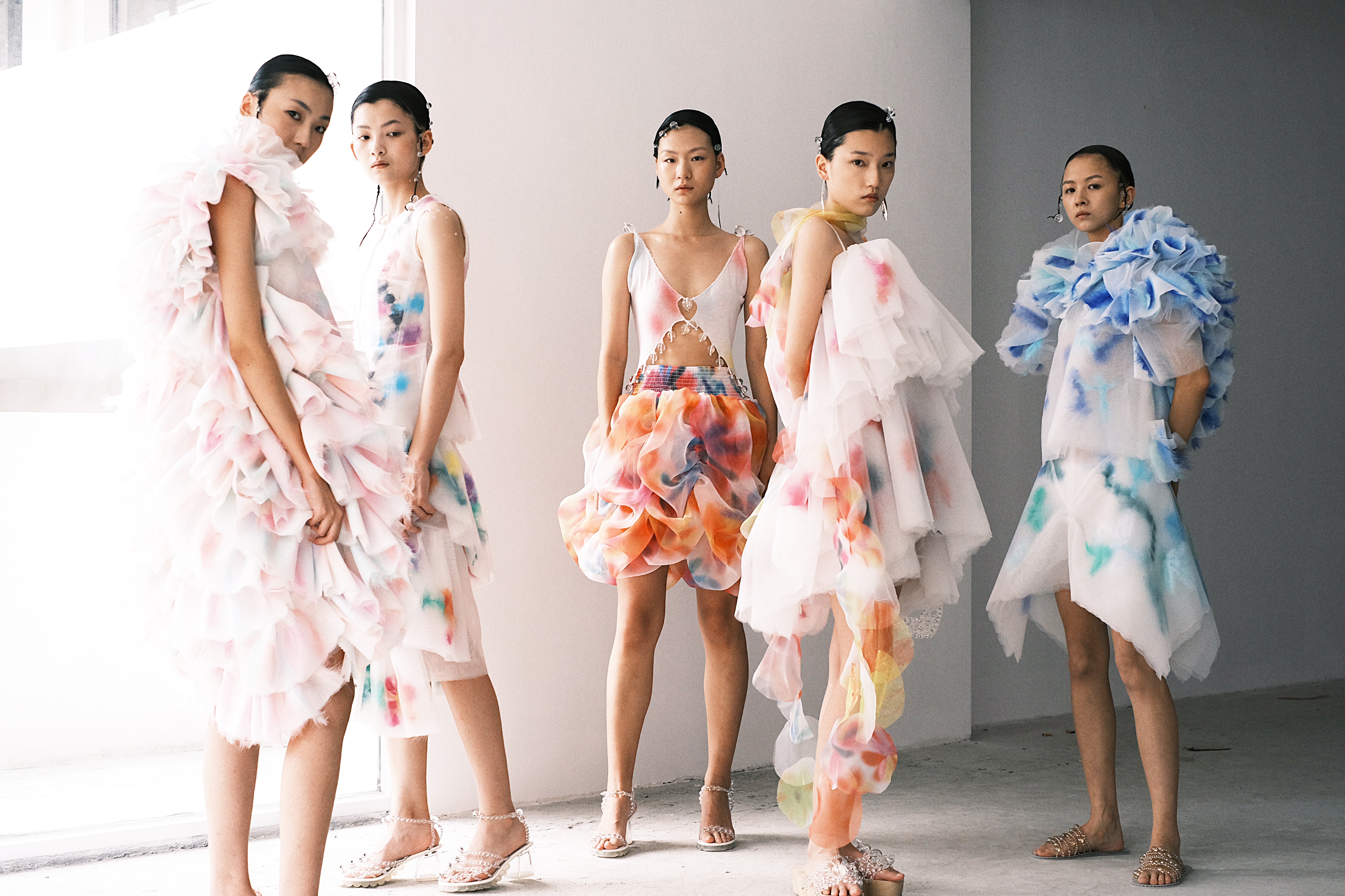 Cooper’s mother, Leah, a lawyer by trade, is now president of his company. “There are days when if I didn’t have her around to say do this or don’t do that, I would not be in this position,” he said.

Germanier has 12 family members working with him, including his 82-year-old grandmother, who is the head of his knitwear studio. “It just happened because of the people who are there to support you…my dad works in the army, so no fashion background whatsoever, which actually is extremely helpful. When you start a brand you are a naive kid with creative dreams, which is great, but at the same time you need someone to put you in that [chief executive officer] spot and help you build your ceo self and those are  your parents because of their background. They may not know how to sew, but they know how to deal with your cash.

“We’re not using this for a marketing tool, this is the way we’re working,” Germanier added. “And the new luxury market is about this authenticity and transparency. I strongly believe you can be successful but still be kind.”

While they all agreed the economic instability makes it a tricky time for young designers to launch a brand, they stressed that a business plan is crucial for those determined to do so. “You should come to the market with a clear message and approach to design,” Germanier said. “Don’t compare yourself to other brands, try to do something unique. It can be niche but at least it will be new.” 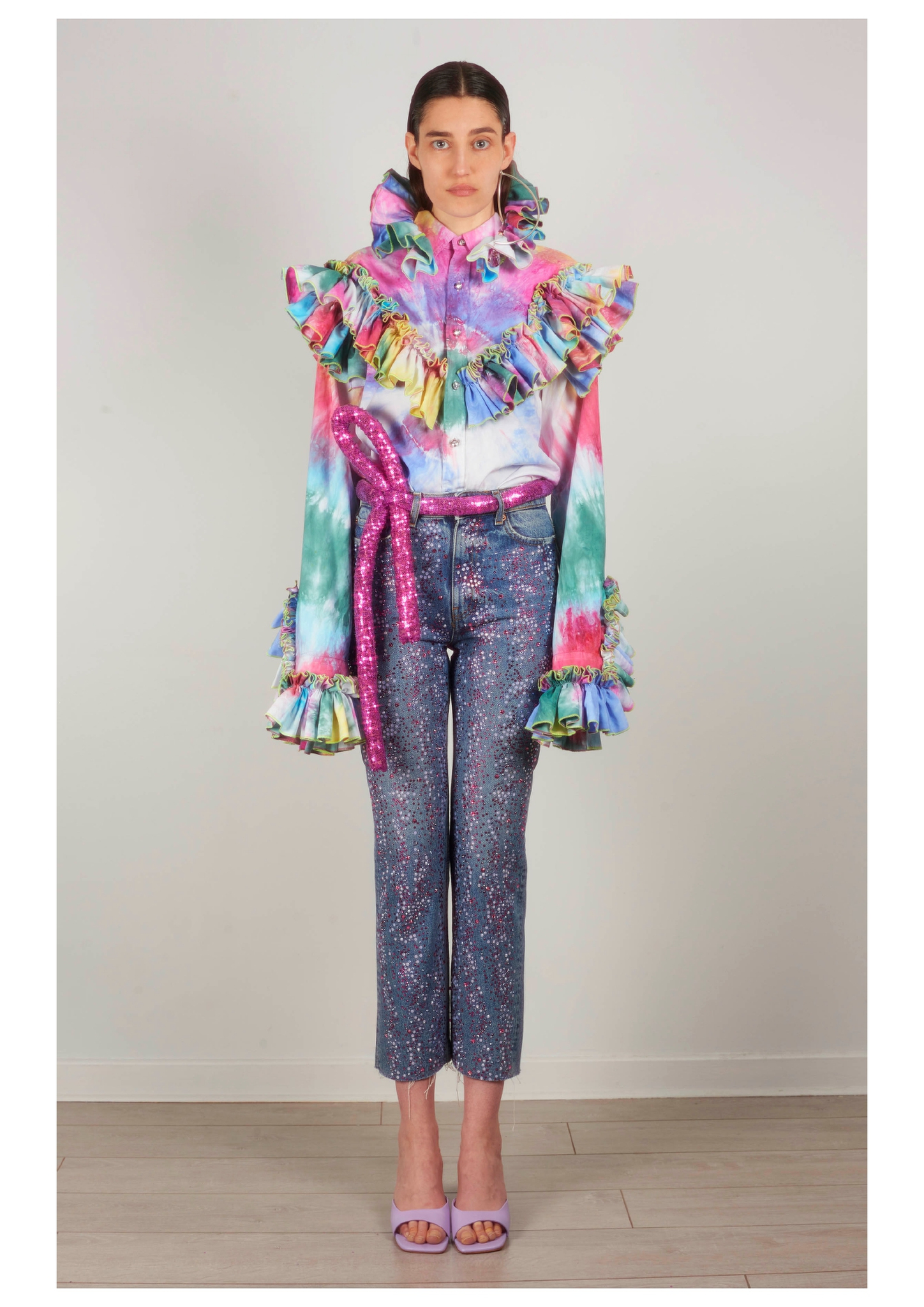 “You have to be sure you know what you’re trying to say. These things are expensive to start.…If you don’t have an opinion, it’s going to close,” he added. “Until you figure out the overall message and why you think it deserves to exist in the world, maybe pump the brakes a bit before you throw money at something.”

“Stay true to yourself but help other designers and media friends, too,” said Fang, who also shows as part of London Fashion Week. “By helping each other, people can grow faster and wider.”

One clear advantage to designers starting out now is technology. Instagram has been a major tool for growth for all three.

“You can directly talk to anyone anywhere in the world,” said Cooper, with the caveat that the new shopping capability has made the app less attractive, he thinks, to users. “I think it’s the future of not only advertising but communication.”

Fang got her first European retail account through a buyer DMing her on Instagram. “It doesn’t give you any boundaries to reach people.”

“With WeChat you can also pay, it’s how I deal with my factory, you can send a PDF and draw on it. It’s so fast and clever,” Germanier added.

When it comes to what they would like to see change in the fashion industry, he led the way saying, “More action.” The designer was at LVMH when the group changed from plastic to recycled cups. “It took six months just to change cups,” he said. “Our strength is that since we’re smaller, we’re more flexible and can adapt more easily to a situation.”

“Everyone is against the calendar, but I kind of like some structure in my life,” said Cooper, who shows as part of Paris Fashion Week, but presented a video in July for spring 2021. “I only do two collections a year, I combine in women’s stuff. But I don’t participate in six to eight collections a year nonsense everyone complains about. You really don’t have to do it, no one has a gun to their head.” 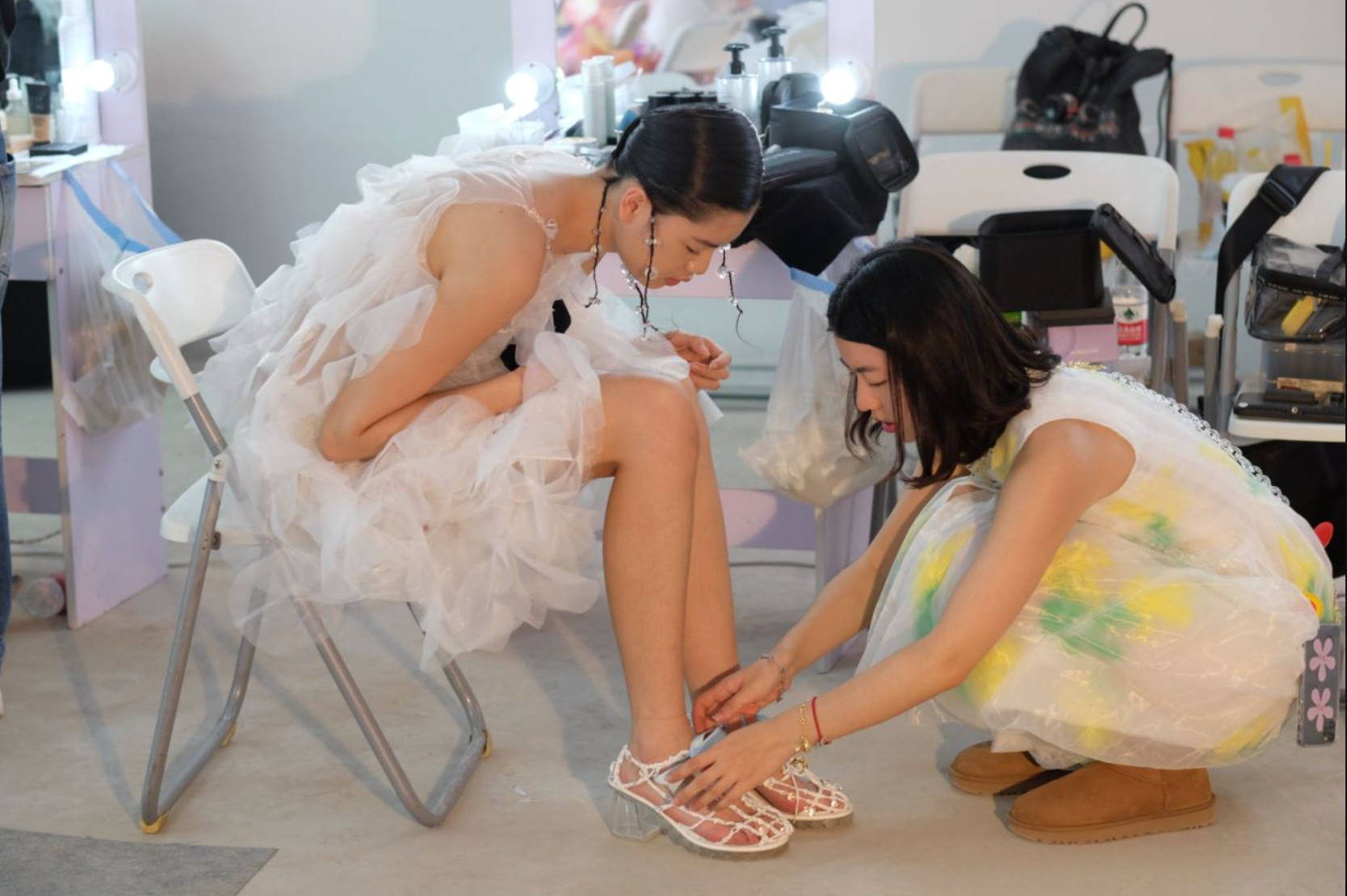 “In China, it’s very open — you can change if you want. We were able to present our show off the fashion calendar, and lots of brands are doing that. Or you don’t have to do a show, you can do a video. And the media is super supportive of young designers,” Fang said. “Maybe because of COVID-19, people are more solutions driven and kinder….”

On the topic of their own futures, all are open to exploring other product categories.

“I want to design sportswear with a feminine look,” said Fang, who has become more health conscious during COVID-19.

Cooper is already in the midst of launching footwear. “Starting with what feels right, which is made in Italy hiking boots,” he explained, adding of his brand ambitions, “I have no desire to be huge, just enough to where things are more accessible and ideas can come across faster and I can use my platform for various initiatives.”

“I’m still waiting to be the creative director of Christian Dior,” Germanier deadpanned. “The reason why is I want to change it. I grew up in Switzerland super clothes minded, and it is my dream to be at the head of one of those houses I admire, but I don’t really respect how it’s built and think I can change it. Dream big or go home.”

As for his namesake brand, “I don’t want to predict,” he said. “I have a business plan for what I want to do, but nobody could have predicted COVID-19, so who knows what is going to happen? You have to go season to season and I would love to keep that flexibility.”

That said, he teased that Germanier will expand to men’s wear, home and tech products, after seeing market demand through data from his newly launched e-commerce site. “As long as I’m still having fun because it’s my passion, I will continue. When there is no more passion, I will just go back to Switzerland and make cheese.” 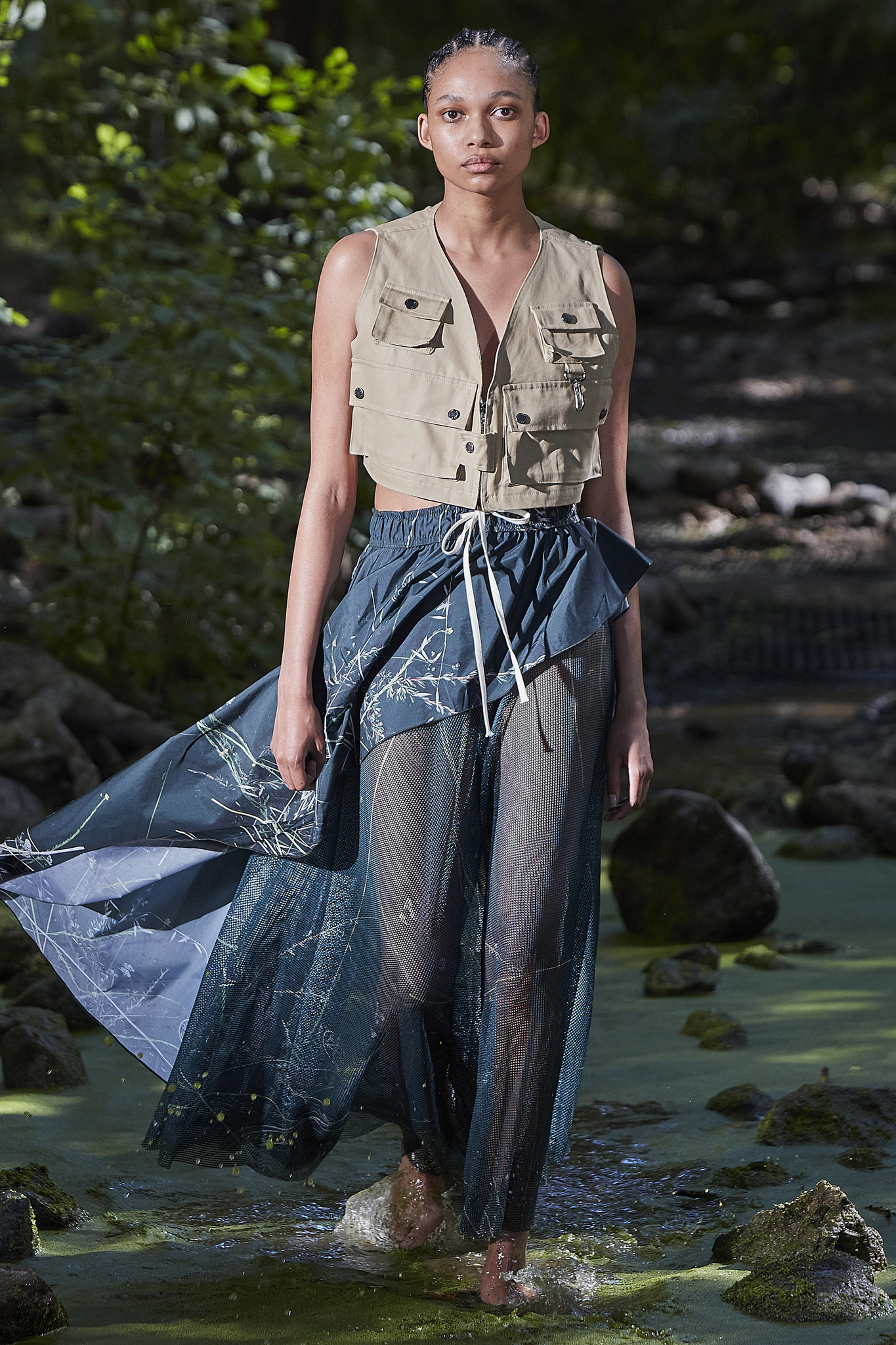