Yurman Heads to the Altar

Jeweler David Yurman is launching a line of engagement rings, wedding bands for women and men, and pearl and diamond jewelry. 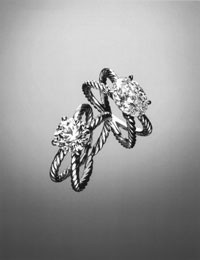 NEW YORK — After 25 years in business, David Yurman is saying “I do.”

The $500 million jewelry company is entering the $55 billion bridal industry with a collection of engagement rings, wedding bands for women and men and assorted classic pearl and diamond jewelry.

“For many years, clients have asked me to do special one-of-a-kind bridal pieces,” said chief executive officer and designer David Yurman. “There are a lot of people who appreciate our product and I want to make sure we are there for all of the big occasions in their lives.”

The collection of about 25 pieces incorporates David Yurman’s signatures, like the twisted cable that appears subtly on the underside of men’s wedding bands in yellow or white gold, and the cushion shape that appears in white gold to divide pearls on a two-row choker or as a setting for diamond stud earrings.

But the company has gone even further in its quest of branding by offering its customers a signature patented diamond cut, dubbed the David Yurman Signature Cut Diamond. The cushion shape — once again referencing the shape that is essential to David Yurman jewelry — is a high-performance cut allowing for optimum light and reflection to the stone. Yurman himself took part in designing the cut, which is offered from one to four carats. Larger stones are available upon request.

Other engagement ring diamond styles include a standard princess cut and an oval cut set horizontally within a ring of fine gold twisted cables. Retail prices start at $425 for plain bands, $1,100 for diamond bands and $5,000 for engagement rings.

The new collection is being rolled out exclusively to David Yurman boutiques this month and will be in all 10 stores early next year.

Carol Pennelli, executive vice president of sales and marketing of the New York-based firm, said the company is evaluating when and how the line will be distributed to wholesale accounts.

“Being in bridal is a different business,” she said. “We want to learn and master it in our own stores before we send it into retail channels.”

The company wouldn’t divulge sales projections, although Pennelli said, “If you look at last year, when we launched pearls, everything that we launched has been so thoughtful and well-planned that I’m confident that this collection is going to be supremely successful.”

An advertising campaign with a bridal focus will bow in December issues of national and regional magazines.

“We’ve had a younger customer than we ever had coming into our doors,” said Pennelli. “The campaign and David’s designs have driven younger customers. David is inspired, and doing things he hasn’t experimented with before.”