Yves Saint Laurent’s Mark Lee talks frankly about the shortcomings of the first phase of YSL’s development and outlines a strategy for phase two. 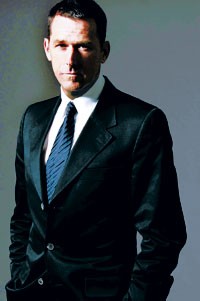 PARIS — With Tom and Dom gone, it’s time for the Stefano and Mark show.

And while they must surmount daunting losses and meet enormous expectations for their show on Sunday night, Yves Saint Laurent’s new dynamic duo is facing the future with confidence — and no regrets.

“We very much share a common vision of what we did well, what we did less well and what has to change. And we’re both working 24/7 to move this company forward together,” YSL president and chief executive Mark Lee said, referring to himself and Stefano Pilati, who succeeded Ford at the design helm last March. “We now have the platform to grow the business aggressively within the walls we’ve built.”

In an interview, Lee spoke frankly about the shortcomings of the first phase of YSL’s development under the Gucci Group umbrella. Those include an inordinate focus on eveningwear, a too-dark shop design and an aggressive expansion that drove the company deeply into the red.

He also outlined his strategy for the next phase in YSL’s development, one based on growing sales by diversifying the product offering and capitalizing on such YSL icons as pantsuits, safari jackets and, yes, even logos.

Lee stopped short of personally criticizing Tom Ford and Domenico De Sole, who sought to pull off at YSL the same rejuvenation miracle they masterminded at Gucci. After all, both Lee and Pilati were present in the company — Pilati as Ford’s chief design deputy, Lee in his current role — and party to those endeavors.

But it’s clear the break has been made and Lee appears to be a deft survivor of all the corporate upheaval that transferred the full ownership of Gucci and YSL to French retail giant Pinault-Printemps-Redoute.

“It was always clear from Day One it was a radical and expensive strategy,” Lee said, seated in his sparsely furnished office on the Avenue George V. “But at the same time, the strategy was correct for a brand like this, for one with as much potential as YSL. Yves Saint Laurent should be positioned against the leading French luxury houses and today we really are.”

After acquiring YSL in 1999 in a drive to create a luxury group to rival LVMH Moët Hennessy Louis Vuitton, Gucci Group immediately imposed its direct-control mantra for production and distribution, terminating more than 150 licensing pacts and setting out to build a network of stores in the best locations worldwide.

All this — and an initial target to reach breakeven by late 2003.

“We started with a great brand with great history and great potential,” Lee said, weighing his words carefully. “But I think the group perhaps should have characterized what we were doing not so much as a turnaround, but as a start-up.”

Lee was referring to the fact that Gucci, while on the brink of collapse in the early Nineties, had a large global network of boutiques and a strong infrastructure for its cash-cow leather goods business.

Not so YSL, which licensed even its core category, ready-to-wear, and had only 14 company-owned retail stores, 12 in Europe and two in the U.S.

“The timeline was never realistic,” Lee continued. “We had been going as fast as we could from Day One. Clearly, this has not proved to be a three- or four-year story.”

Lee heaped praise on his mentor, De Sole, and on Ford, assuring the strategy they set was “fundamentally right” for the long term. “Domenico was quite fearless in his conviction of how a luxury brand should be controlled and managed,” Lee said.

As for Ford, one of the most charismatic fashion figures of the Nineties, he certainly revved up YSL’s image and “brought a lot of excitement” to the brand, Lee said.

“Still, it has to be said, it’s not easy to share a creative director at the level we were sharing,” he added. “I’m extremely pleased Stefano is devoting 100 percent of his time to YSL.”

Lee acknowledged that YSL’s operating losses, which widened to 109.1 million euros, or $123.5 million, in 2003, could have been reduced had the rejuvenation plan been adjusted for a drop in luxury spending in the wake of the terrorist attacks in 2001 and other woes. “We could have slowed down after Sept. 11,” he said. “But there was a mission in terms of the group of moving YSL from point A to point Z.”

That said, Lee outlined some impressive accomplishments over the past four years. Sales in directly owned YSL stores grew almost fourfold since 1999, to 90 million euros, or $101.9 million, at the end of 2003, while wholesale volume doubled to 48 million euros, or $54.3 million. Dollar figures have been converted at the average exchange rate.

Meanwhile, the retail network was expanded to 61 directly owned boutiques in top locations such as 57th Street in New York and Rodeo Drive in Los Angeles. The brand also made significant inroads in Asia, Japan and the U.S. Franchise locations bowed in Moscow, Dubai, Kuwait, Jakarta, Manila and Kiev in addition to two long-standing partnerships in Washington.

As of the first half of 2004, Europe accounted for 44 percent of sales; the Americas, 25 percent, and Japan and Asia, 31 percent, in directly owned stores. Only four years ago, roughly 90 percent of retail revenues originated in Europe.

By product category, leather goods advanced from practically nil to 35 percent of the brand turnover in 2003. Shoes zoomed from negligible to about 12 percent of sales. Ready-to-wear now counts for roughly half the volume, with licensing royalties accounting for 6 percent.

“When we started, it was 90 percent rtw and the rest accessories,” Lee said. “And back in 1999, licensing was 66 percent of total revenues.”

With YSL now down to 11 licensing pacts, “We’re very clean. We achieved our goal,” he said. “We’re highly exclusive today and very well presented in retail and wholesale.”

Still, there is plenty of room for improvement.

Although YSL sales increased 18.6 percent in the second quarter, and operating losses were reduced by 3.9 million euros, or $4.7 million, to 14.9 million euros, or $18 million, as reported, “losses are significant,” Lee said. He declined to give any new timeline for reaching breakeven, especially since Robert Polet, the new Gucci Group ceo, won’t table his strategic plan for the group until the end of the year.

“The losses are really coming from the fixed cost structure we’ve built. We now need the sales level to catch up,” Lee said. “The main goal is to accelerate the growth in all the core categories, which are rtw, leather goods and shoes. Our biggest potential remains in those three categories.”

He declined to give projections, but offered, “We have the potential to grow this brand to a much higher number.”

Although Ford had conceived of YSL as having an after-dark character, the new brand stewards do not — and Lee acknowledged that an often single-minded focus on evening clothes may have stunted the company’s development.

“That can’t be all YSL stands for,” Lee said. “Mr. Saint Laurent invented the modern wardrobe for the second half of the 20th century, and we shouldn’t throw that away.”

Pilati’s first effort — a cruise collection spanning suits, swimwear, jeans and cocktail dresses — was a signal of a more diversified direction. The cruise effort will be featured in an advertising campaign breaking in November magazines.

Lee stressed iconic designs — from smoking and safari jackets to peasant blouses — should and would be utilized going forward, just as Chanel continually elaborates on its rich vocabulary of tweeds, camellias, quilting and spectator details.

“Big volume depends on icons,” he said. “I believe strongly that what separates a niche brand from a major global brand can be summed up to a large degree by those icons one is able to tap into and utilize.”

Lee said the best-selling collections to date were ones closely linked to the house’s legacy, in particular, the Africa-inspired, gypsy and so-called “Diana Ross” collections.

Meanwhile, retail sources said the last two spring collections — one based on surrealist themes, the other with handkerchief hems — performed poorly.

“In rtw, we have icons and they need to be utilized and massaged through products and communications,” Lee stressed. “With 50 percent of our business in rtw, we can’t run it the same way accessories-driven companies use it, just as a vehicle to sell accessories. We need a consistent core, and that’s very much a part of the vision Stefano and I share and are working on.”

Logos, practically absent during the Ford rein, also are viewed as an opportunity, particularly the famous vertical and interconnected initials. “Our best-selling handbag line in Asia is called the Kahala line, which is a tote that has a large, stylized logo,” Lee noted.

Also, sources indicate that other “Gucci-fied” aspects of YSL would soon be eliminated, which relate to color, corporate identity and window design.

“The first-generation stores definitely proved to be too dark, and we went back and lightened and whitened all of them,” Lee said. “We just built most of these stores. We’ll have to live with them for the foreseeable future.”

No major openings are planned for 2004, and Lee enumerated few for 2005, most of them in Japan, South Korea and Taiwan.

As for communications, Lee and Pilati declined to say who would shoot the spring 2005 advertising campaign, or define other collaborators in creating its communication plan. But Lee assured all elements would reflect a better “balance” of the brand’s product offering — a departure from campaigns focused on “glamorous eveningwear and little else.”

Meanwhile, “excited and also optimistic” is how designer Pilati described the mood in the design studios on the eve of one of the most anticipated events of Paris Fashion Week. “I’m working on the show in the best way I can.”

Pilati declined to give any hints of what’s coming, saying only, “It’s an evolution of what we’ve done so far, and done by a new designer.”

And even if Saint Laurent himself may be in the audience, along with the world’s most important buyers and editors, Pilati said customers come first on his eager-to-please list: “The women that will buy it first, and wear it.”