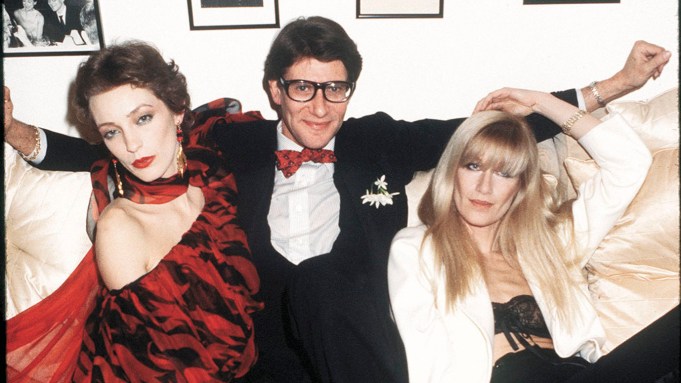 Yves Saint Laurent is celebrating a sparkling milestone this year: their 60th anniversary.

To celebrate, the late couturier’s creations will be displayed at six major museums in Paris, alongside some of the art works that inspired them.

Saint Laurent’s breakthrough in his career started in 1955 when he was hired by Christian Dior. Though his first year started slow, with each passing season, Saint Laurent was able to submit more and more of his sketches to Dior for the couture collection.

In August 1957, Dior tapped Saint Laurent to succeed him as head designer of House of Dior at the age of 21. Later that year, Dior died of a sudden heart attack at the age of 52.

Saint Laurent was the head of Dior until 1960, when he was enlisted to serve in the French Army during the Algerian War of Independence, though he only served a few weeks. While he was away, he learned he had been fired from Dior.

After returning, the designer sued Dior for breach of contract and won. Shortly after, he and his partner, Pierre Bergé, launched their own fashion line, Yves Saint Laurent. He showed his first collection in January 1962, at the age of 26.

Art works and literature indirectly inspired almost everything he produced, and some some of Saint Laurent’s couture creations over the years mirrored works by the likes of Vincent van Gogh and Pablo Picasso. One of his most renowned works is the Mondrian collection, which paid homage to modern artists, including Piet Mondrian. Part of the collection were six shift cocktail dresses inspired by Mondrian’s paintings, with a design consisting of graphic black lines and blocks of white and primary color.

In 2008, Saint Laurent passed away at his residence in Paris after a battle with brain cancer. He was 71.

Today, the label is one of the biggest household names in fashion, with Anthony Vaccarello as its creative director since 2016. At the 2021 Met Gala, Vaccarello walked in with a star-studded entourage in Zoë Kravitz, Olivia Rodrigo, Hailey Bieber, Indya Moore and Blackpink’s Rosé, who walked alongside the designer for photos on the red carpet.

EXCLUSIVE: Why Saint Laurent Is Heading to the Champs-Élysées