PARIS — “You know, I don’t remember much about the nights,” confessed Betty Catroux, rifling through a rack of clothes from her vast collection of Yves Saint Laurent outfits. The late couturier’s muse was trying to remember when she last wore a cowboy-style fringed black leather jacket from 1980.

The candid scene is part of a short black-and-white film directed by documentary maker Loïc Prigent, screened as part of the “Betty Catroux, Yves Saint Laurent, Feminine Singular” exhibition opening at the Yves Saint Laurent Museum in Paris on March 3.

It shows the fashion icon in conversation with Anthony Vaccarello, creative director of Saint Laurent, who was given carte blanche for the exhibition, organized by the Fondation Pierre Bergé — Yves Saint Laurent in partnership with the French fashion house, which is now owned by luxury group Kering.

It marks a departure for the museum, which has rarely showcased the women in Saint Laurent’s orbit (the last and only time was in 2007, with an exhibition about American socialite Nan Kempner.)

It’s also the first time the institution, headed by Madison Cox, has allowed the creations of one of Saint Laurent’s successors to be showcased within its walls. Though Bergé, the designer’s longtime companion and business partner who died in 2017, was supportive of Vaccarello, he jealously guarded the couturier’s reputation and legacy.

Olivier Flaviano, director of the museum, said the dialogue made sense, given the continued relevance of Catroux, who featured in Saint Laurent’s fall 2018 advertising campaign and was one of the muses for Vaccarello’s fall 2019 collection for the house.

“Monsieur Saint Laurent said in 1968: ‘Betty is the spirit of now,’ and what is incredible is that the same can still be said today,” he said. “Betty herself says, ‘I hate nostalgia, I hate the past.’”

That’s what prompted Catroux, born in 1945, to donate 180 haute couture pieces, 138 pieces of ready-to-wear and a collection of accessories to the foundation, providing the catalyst for the exhibition. 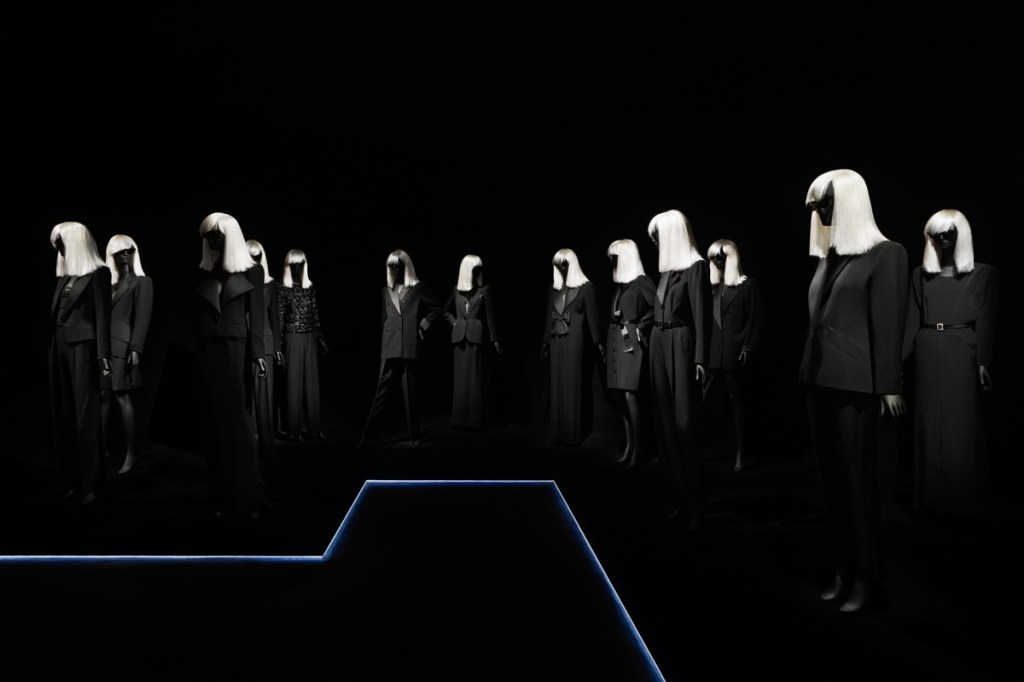 For the occasion, the historic reception rooms at 5 Avenue Marceau have been transformed into a black-walled gallery plastered with images of Catroux with Saint Laurent, her husband François Catroux and friends; sitting front-row at fashion shows, and modeling his designs for photographers like Jeanloup Sieff.

Handwritten notes from Saint Laurent to Catroux, who called each other by the nickname “Pulu,” read like love letters. The designer first laid eyes on her at the New Jimmy’s nightclub in 1967. He had a friend approach Catroux and ask her to model his collection, but she promptly turned him down.

“Saying no to Saint Laurent was unheard of. That was what started it. He called me every day after that, and we traveled everywhere together,” Catroux told Vaccarello in the film.

Lola Fournier, deputy director of collections at the Yves Saint Laurent Museum, pointed out the strong physical resemblance between the two. “She was his female double, his twin,” she said, gesturing to a wall-sized image of the pair sitting in Central Park in 1968.

With her skinny frame, poker-straight hair and androgynous allure, Catroux was the perfect foil for Saint Laurent creations ranging from the Saharienne safari jacket to his signature “Le Smoking” tuxedo. The exhibition notes provide more insight into the relationship.

“For Yves it was love at first sight, physically. I was androgynous, asexual. It definitely affected him, but our resemblance was not only physical; we were alike morally, mentally and it was something incredible. And what was amazing about him is that he felt that I could be his soul mate, a kindred spirit,” Catroux said.

Sharing a penchant for substance abuse, the two would even go to rehab together at the American Hospital in Paris. A handwritten note from Saint Laurent pictured Catroux attached to an IV, with a plea to wash her hair before he visited her room. “We just had one thing in mind: to get out and start all over again,” Catroux noted.

She told Vaccarello that when the openly gay Saint Laurent had overindulged, he would urge her to get a divorce and marry him. “Quelle horreur!” she exclaimed, adding they would have driven each other crazy. 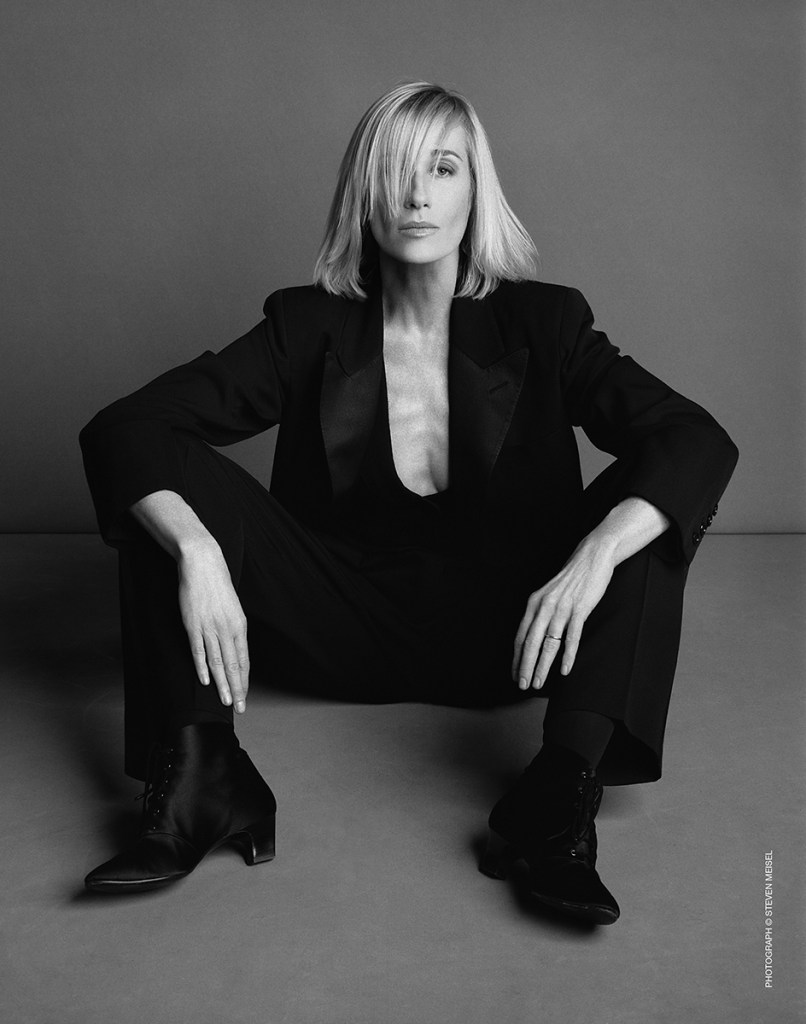 Catroux met Vaccarello at the opening of the Yves Saint Laurent Museum in Marrakech in 2017, and the two hit it off. “I love Anthony’s attitude, it touches me a lot. He has a real elegance, a wonderful charm. I like him a lot, and I think he has captured that Saint Laurent ambience, that sense of mystery, very well,” she said.

The exhibition features 45 outfits selected by Vaccarello, divided into sections dedicated to the Saharienne, black leather, daywear and tuxedos, all displayed on mannequins wearing sunglasses and blonde wigs. Among her unique styling tricks: tucking her sunglasses into her waistband, and using a shoe dust bag as an evening bag.

“What’s interesting is to have a designer’s vision of Saint Laurent’s work, and how that creates a bridge between the past and the present,” said Fournier.

Catroux mainly wore collection prototypes, a trick she learned during her two-year stint working for Gabrielle Chanel. “The height of luxury for a millionaire is to buy the prototype,” she slyly noted. These include a denim jacket and matching bag from around 1990. 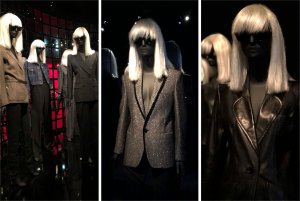 Vaccarello has styled some looks with boots, T-shirts or pants from his own collections to highlight their timeless nature.

“There is a true lesson here, not only in allure but also in liberty and independence. In a time when people no longer take risks for fear of being judged amid an atmosphere of rampant puritanism, this lesson is more important than ever,” he said in the show catalogue.

The final room features four women’s and men’s looks from Vaccarello’s recent collections that pay tribute to Catroux, alongside a bank of monitors showing her posing for his ad campaign.

“The challenge today for museums in general, not just the Yves Saint Laurent Museum, is how to make fashion modern, alive and contemporary,” said Flaviano. “For Monsieur Saint Laurent, it was important for the clothes to tell you something about the person wearing them.”

Harper’s Bazaar Gets the Museum Treatment in Paris

WATCH: Behind the Seams of Christian Cowan’s Fall 2020 Collection