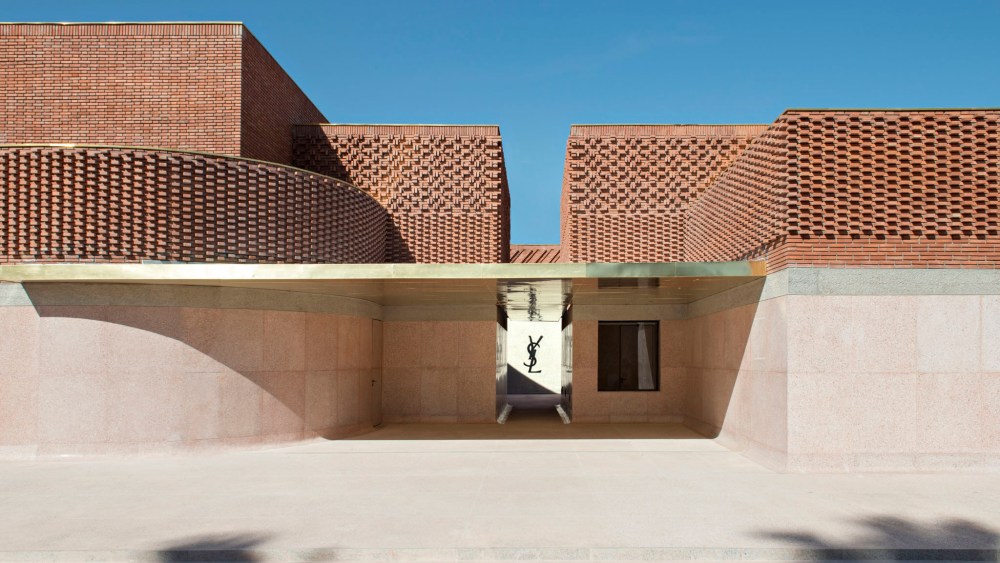 MARRAKECH — “I am sure that they are watching us from above and that they are insanely proud,” said Betty Catroux, as she toured the Yves Saint Laurent museum in Marrakech on the eve of its inauguration.

The couturier’s longtime muse, instantly recognizable with her skinny frame, pole straight white hair and dark glasses, was soaking in the main exhibition hall at the museum: a cavernous black space where a row of black outfits faced off against creations in a riot of bright colors inspired by the Moroccan city.

The institution is set to open to the public on Oct. 19, a little more than a month after the death of Pierre Bergé, Saint Laurent’s longtime companion and business partner, who supervised every aspect of a project that crystalized both his love for the designer, who died in 2008, and the country that was their second home since the Sixties.

“I feel very emotional,” Catroux said during Friday’s preview visit. “Fortunately, being religious, I feel emotional and high, instead of emotional and depressed.”

She recalled coming to Marrakech alone and joining Saint Laurent in a little pavilion between the two villas where they were staying.

“We would meet like lovers, have drinks and gossip. We listened to jazz. It was marvelous. It was like a fairy-tale — such a special relationship. So I would make little appearances to stimulate him with my clothes. He made me outfits for here. I have some Moroccan trousers that I am going to wear tonight with a tuxedo jacket,” she said.

Princess Lalla Salma, the spouse of Morocco’s King Mohammed VI, cut the ribbon on the museum in a ceremony on Saturday that was closed to press, marking the climax of a lifelong love affair between Saint Laurent and the country that inspired his most brilliant collections.

The previous night, a giant screen was set up on the city’s bustling Jemaa el Fna square, where hundreds of locals and tourists stopped to watch a screening of the designer’s spectacular fashion show held before the final of the 1998 World Cup, followed by his emotional farewell retrospective at the Pompidou Center in 2002.

Björn Dahlström, director of the Yves Saint Laurent Museum in Marrakech and the Berber Museum in the neighboring Jardin Majorelle, noted that Bergé once said he and Saint Laurent had a sentimental debt toward Morocco, where the couturier came twice a year to design his collections.

“Morocco gave them a lot emotionally and professionally. It was a very important source of inspiration for Yves Saint Laurent, so I think it’s a way for them to give back to the country what it gave to them,” he said.

At a press conference in Paris in June where the facade of the museum was first unveiled, Bergé — by then confined to a wheelchair as a result of his long struggle with muscular dystrophy — described their first visit to Marrakech in 1966 as “an exceptional case of love at first sight.”

The couple bought the Majorelle garden in 1980 to prevent it from falling into the hands of a promoter, and turned it into an attraction that now draws 800,000 visitors per year. The new museum is the brainchild of architecture firm Studio KO, which has designed stores for brands including Balmain, Ami and Aesop.

Located on Rue Yves Saint Laurent, it stretches more than 43,000 square feet, including the permanent exhibition space showcasing the designer’s work, a temporary exhibition area, a research library, a store, a café with an outdoor terrace and a 150-seat auditorium that can host talks, concerts and film screenings.

The museum is kicking off its cycle of temporary exhibitions with “The Morocco of Jacques Majorelle,” set to run until Feb. 6, featuring some 30 works by the painter. It is also presenting images of Catherine Deneuve shot by photographer André Rau in Marrakech in 1992 to mark the 30th anniversary of the couture house.

The American landscape gardener, who married Bergé in March, has been closely involved with the planning of the museum, which opens three weeks after the inauguration of the Yves Saint Laurent museum in Paris.

“It’s a project that I’ve given a lot of energy and effort to,” he said. “I’m always at the other side of the table — I’m working for a client — so it was a very unique experience, and for me as a public museum, not a private residence, there’s a great spirit of generosity that was not mine to begin with, but I was very excited to be a part of it.”

He has been a resident of Morocco for close to two decades. “I’ve seen how this country is evolving, and it’s important to create those links between the West and the Arab world, so it’s exciting for me personally. I’m very happy, very moved. It’s emotional on many levels,” Cox said.

The building’s facade features a latticework of terracotta bricks that nods both to the texture of fabric and the traditional, windowless houses of the city’s medina. Its base is surfaced with a terrazzo made from shards of Moroccan marble and stone. The museum’s logo, designed by Philippe Apeloig, stands out in gleaming golden letters.

Architects Karl Fournier and Olivier Marty, who are behind trendy venues such as Chiltern Firehouse in London, previously worked with Bergé on the renovation of a studio above the Berber Museum, followed by his villa in Tangiers.

“The brief was very clear: He wanted a building that was both contemporary and Moroccan, in other words, that reconciled these two things which very often — unfortunately — can seem contradictory,” Fournier said.

“Later on, he added something important that guided us until the end, which was that we should not turn it into a mausoleum, something too backward-looking and dedicated uniquely to Yves Saint Laurent, but make it an open building,” he added.

Visitors enter via an open circular courtyard dominated by the YSL logo designed in 1961 by Adolphe Mouron Cassandre.

In the entrance hall, in front of a square patio lined in bluish-green enameled bricks, stands an oversize African bird sculpture, part of Saint Laurent and Bergé’s extensive collection of art and antiques, which was auctioned off in 2009. “That was the first piece they bought together — the only piece he didn’t sell,” noted Cox.

In the first room, Saint Laurent’s Mondrian dress from 1965 sits alongside a wall covered in dozens of framed letters and photos. It segues into the darkened main hall, which is dominated by an oversize black-and-white photograph of Saint Laurent wearing a white suit, which seems to glow in the dark.

“The lighting was designed so that you would get the impression that it emanates from this portrait of Monsieur Saint Laurent,” said architect and set designer Christophe Martin, who was in charge of all the interiors. “I wanted him to look like a demigod, or a hero, in the Greek sense.”

The black walls act like a canvas for video projections of Saint Laurent quotes, sketches and moving images of models in his clothes. “My idea was to take people on a journey into another dimension,” Martin said. “It’s as if the walls did not exist and you were really inside Saint Laurent’s head.”

Dominique Deroche, who worked as Saint Laurent’s press officer for more than four decades, faced the tricky task of selecting 50 outfits from the Fondation Pierre Bergé-Yves Saint Laurent’s trove of 5,000 items of clothing. She said she was guided by Saint Laurent’s words, culled from interviews he gave.

“I am not at all a curator. With me, it’s spontaneous, from the heart,” Deroche said.

“People think these dresses are rigid, that they don’t move, that they stay in closets, but before they were in a museum, these were living, breathing dresses that had an existence, that were photographed. So my choices were based on my working memory of these clothes,” she added.

A case in point is the black velvet dress worn by Deneuve to the opening of the Saint Laurent retrospective at the Metropolitan Museum of Art in 1983.

There are the basics of the Saint Laurent wardrobe — the tuxedo, the peacoat — alongside Moroccan-inspired creations such as burnous capes from the Rive Gauche ready-to-wear line, a Saharienne safari jacket, and a flaming orange cape embroidered with purple bougainvillea flowers.

The latter two were painstakingly re-created by seamstresses that worked for the house’s haute couture division before it closed in 2002, but most of the creations on show are the original pieces, including some that have never left the archives before.

The show features a dazzling array of evening gowns and culminates with a soaring installation that pairs the Bambara dress from 1967, whose conical breasts later inspired Jean Paul Gaultier, with three sparkling jackets embroidered by Lesage and a white dress designed in homage to Georges Braque.

“Pierre Bergé didn’t want me to do day clothes. Since we were coming to Morocco, he wanted visitors to experience the ‘wow’ factor of Saint Laurent,” Deroche said. “We are giving you the whole universe, the soul, the strength of Saint Laurent.”