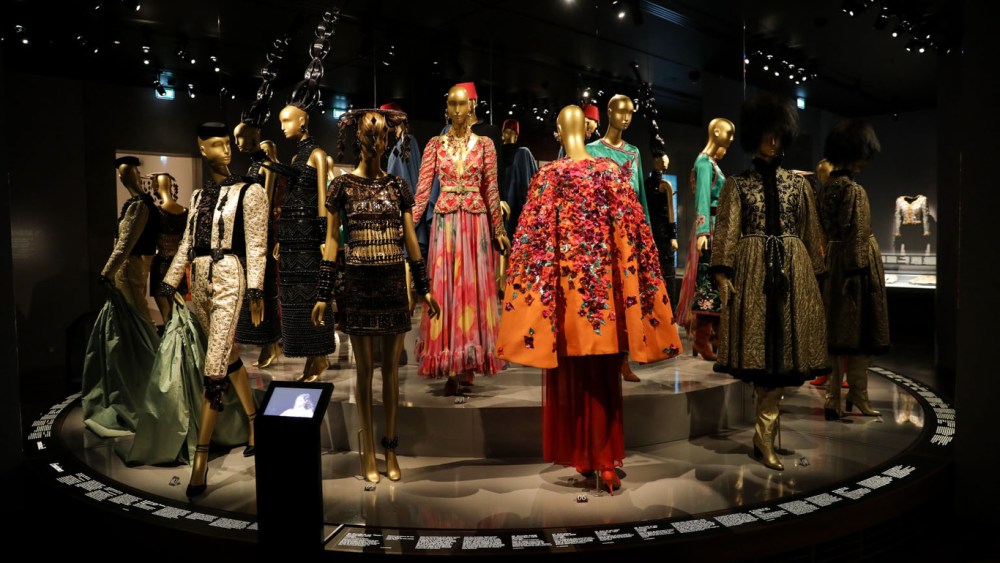 PARIS — The Yves Saint Laurent museum opened here Thursday, less than three weeks after the death of Pierre Bergé, who worked tirelessly to create a permanent home for the work of the couturier he loved and helped to achieve international fame.

The project grew out of the Fondation Pierre Bergé-Yves Saint Laurent, which since 2004 has been staging exhibitions to showcase pieces from its archive of 5,000 items of clothing, 15,000 accessories and tens of thousands of sketches.

“In 2002, when Yves Saint Laurent decided to retire, I decided to transform memories into projects,” Bergé said in his last public appearance in June.

Cox said the institution was “delighted and proud” to reopen after more than a year of preparations.

“We’re especially pleased that a younger generation will have the chance to discover it. Pierre Bergé was especially tenacious in safeguarding and sharing this special heritage. We will stay faithful to his wishes,” Cox said in a statement.

“Trailblazers and fighters, Yves Saint Laurent and Pierre Bergé were tireless. This museum is an example, the result of a long labor of conservation. They both shared in this task, bringing the same energy, the same urge to push back the borders of creativity and develop their fashion house,” Nyssen said.

The museum, which opens its doors to the public on Oct. 3, is located at 5 Avenue Marceau, formerly home to Saint Laurent’s couture house and now the headquarters of the Fondation Pierre Bergé-Yves Saint Laurent. Visitors have access to the couturier’s design studio for the first time.

They arrive in a reception room, decorated by interior designer Jacques Grange, displaying large black-and-white photographs of the designer from each decade of his activity. The house, which moved into the space in 1974, staged couture shows there until 1976, when it switched to the Intercontinental Hotel.

Across the hall hangs a series of four portraits of Saint Laurent by Andy Warhol, marking the entrance of the exhibition proper. The show space has been doubled in size to 4,850 square feet and refurbished by Grange and stage designer Nathalie Crinière, who have worked on a number of the foundation’s art exhibitions. 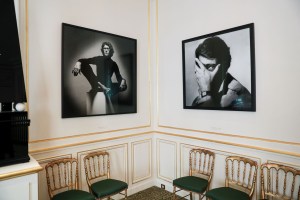 The entrance salon of the museum.

“The style he created in the Sixties has endured. When you see young women in the street who definitely did not know Yves Saint Laurent, wearing a pea coat, a jumpsuit or a pant suit, you realize that women today to a certain extent are all wearing Saint Laurent without realizing it, and that is possibly the greatest legacy he could have left,” said Flaviano.

“Unlike other couturiers, Saint Laurent was looking at the street. He wasn’t working in some sort of ivory tower,” he added. “He understood his era and he was part of it.”

The rest of the room is dedicated to showing the full development of a collection, starting with a mix of looks from Saint Laurent’s first two seasons under his own label in 1962, and changing every 12 months. 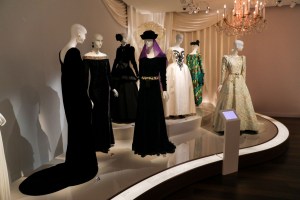 The next section showcases the extraordinary knowhow of the house’s suppliers with three jackets, the most spectacular of which is titled Hommage à ma maison and was embroidered by François Lesage with heavy glass beads and gilded leaves inspired by the house’s lavish interiors.

“During the design phase, Yves Saint Laurent asked François Lesage to come here in order to watch the Paris sky reflected through the chandelier in his office. He asked him to translate that into an embroidered jacket,” Flaviano said.

There is a room dedicated to the exotic influences in Saint Laurent’s work, with outfits including a Technicolor cape embroidered with flowers inspired by Morocco, which became the designer’s second home in 1966 when he and Bergé acquired a home there.

A second YSL museum is set to open in Marrakech on Oct. 19. Stretching over 43,000 square feet, it will include a permanent exhibition space, a temporary display area, a research library, a store, a café with an outdoor terrace and a 150-seat auditorium that can host talks, concerts and film screenings.

The institutions open at a time when French fashion houses are moving to preserve their archives with state-of-the-art conservation facilities, and the French government is stepping up efforts to protect what it considers a key element of the country’s cultural heritage.

A screening room at the Paris venue will show a film delving into the partnership between Saint Laurent and Bergé. The screening room leads to the upper floor of the museum, where Saint Laurent designs mirror the history of fashion from antiquity to the Forties. “This is a theme that has never been explored before,” noted Flaviano.

A display case features the oversized heart brooch, created in 1962, that the designer traditionally pinned on one of his models before each show. But the high point of the tour, without a doubt, is entering Saint Laurent’s studio, which looks as though he has just stepped away from his desk.

“We have recreated it as best we could,” said Flaviano. “We asked his former studio assistants to help us put everything back in place so that it would be realistic, and it was funny, because they really got into it and started bringing us stuff.”

Among the tchotchkes on Saint Laurent’s work desk, a simple plank with two trestles, are mementos like a cane that belonged to Christian Dior, where Saint Laurent began his career, and statuettes of lions and French bulldogs, in honor of his pets, which were all named Moujik.

His tortoiseshell glasses lie alongside a pencil sharpener topped with a plastic Statue of Liberty.

The foundation has recorded interviews with 15 former employees detailing the entire process from the design of a collection to its presentation, which are screened in a separate room.

“Since there was no Twitter, Instagram or mobile phones, you were not allowed to publish images of the clothes presented at the show before the monthlies could present the collection,” Flaviano said.

“The dailies could publish right away, but they were only allowed one or two photographs, except for Women’s Wear Daily with John Fairchild, who always got a preview of the collection before it was even presented,” he added.

Saint Laurent’s fondness for costume jewelry is showcased in a cabinet of curiosities, with pink and red display cases that contain items such as heart-shaped wooden bangles and a medieval cross. Another wall is filled with Saint Laurent’s sketches, including a theater set he designed at the age of 15.

The visit ends on a poignant note, with dresses inspired by artists including Vincent Van Gogh, Henri Matisse and Pablo Picasso displayed alongside a video of the 2002 press conference at which Saint Laurent announced his retirement.

The museum’s opening coincides with the publication of several books and the screening of a documentary by Loïc Prigent on Franco-German network Arte on Oct. 1.

The filmmaker interviewed Bergé, as well as the people who worked with Saint Laurent in the couture atelier, fashion historian Olivier Saillard, Saint Laurent biographer Laurence Benaïm and jewelry designer Elie Top, a former assistant at the house.

“Drawing was vital for him. It came out of him naturally. The few times you actually see him draw, it’s very fast, there are no corrections and it’s his primary means of expression. It is his own private language,” Prigent told WWD.

The documentary also looks at “La Vilaine Lulu,” the bratty child cartoon alter-ego Saint Laurent started drawing while working at Dior. “It’s quite sadistic and nasty,” said Prigent. “I think it was a release. It’s a moment when he is not polite and he is not trying to please anyone.”

Flaviano said the foundation was planning to stage an exhibition of “La Vilaine Lulu” drawings in the future. The venue will host thematic exhibitions once a year, starting in October 2018 with “Asia Imagined by Yves Saint Laurent.”

In addition, Saint Laurent veteran Christophe Girard and his film co-producer Bénédicte Couvreur revealed on Thursday that Bergé had agreed to the release of “Célébration,” a documentary by Olivier Meyrou. Bergé had taken legal action in 2001 to block distribution of the film, then called “5, Avenue Marceau.”

The feature-length documentary, shot between 1997 and 2002, is said to contain intimate footage of Bergé and Saint Laurent. Officials at the foundation were not immediately available to comment on the matter.