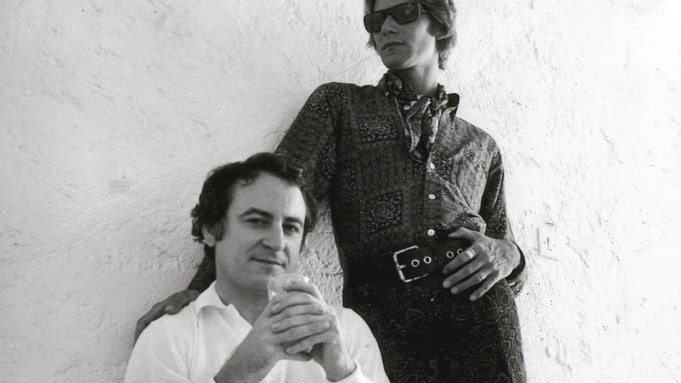 PARIS — Even illness couldn’t keep Pierre Bergé away from the press conference on Thursday unveiling the future Yves Saint Laurent museums in Paris and Marrakech, slated to open this fall.

A labor of love if ever there was one, the project grew out of the Fondation Pierre Bergé-Yves Saint Laurent, which since 2004 has been staging exhibitions to showcase items from its archive of 5,000 items of clothing, 15,000 accessories and tens of thousands of sketches by the late couturier.

“In 2002, when Yves Saint Laurent decided to retire, I decided to transform memories into projects. Others may try, but they have no memories, so they can always keep trying,” said the 86-year-old Bergé, feisty as ever despite being confined to a wheelchair after a stint in hospital for an undisclosed ailment.

“He came home about a week ago,” said his husband, American landscape gardener Madison Cox, who is vice president of both the Fondation Pierre Bergé-Yves Saint Laurent and the Fondation Jardin Majorelle in Morocco, which is adjacent to the new museum.

“He was absolutely insistent that he be there, because this is really the pinnacle of his [work], I think, for him: the idea of not just one, but two, museums in the two key places of their lives,” Cox told WWD.

In brief remarks, Bergé — Saint Laurent’s longtime companion and business partner — described their first visit to Marrakech in 1966 as “an exceptional case of love at first sight.”

The couple bought the Majorelle garden in 1980 to prevent it from falling into the hands of a promoter and turned it into an attraction that now draws 800,000 visitors per year. The new museum is the brainchild of architecture firm Studio KO, which has designed stores for brands including Balmain, Ami and Aesop.

Images of the institution were revealed for the first time at Thursday’s event, which was held before a packed audience in the Yves Saint Laurent lecture hall at the French Institute of Fashion, the higher education institution founded by Bergé in 1986.

The institutions open at a time when French fashion houses are moving to preserve their archives with state-of-the-art conservation facilities, and the French government is stepping up efforts to protect what it considers a key element of the country’s cultural heritage.

The country’s culture ministry in April unveiled a series of measures to safeguard the country’s fashion assets, including the creation of a permanent collection to be housed at the National Center for Visual Arts, which will purchase five designer pieces every season.

Cox noted that before Bergé and Saint Laurent, couture houses and their customers were in the habit of discarding designs from previous seasons.

“They were the first to really understand the importance of what they were doing and what he was creating,” he said. “No other fashion house ever had that policy, that dynamic or that philosophy to keep that. Today, they’re realizing that’s part of the house’s cultural heritage, or the nation’s cultural heritage.”

Cox last month attended the opening of the “Yves Saint Laurent: The Perfection of Style” exhibition at the Virginia Museum of Fine Arts in the United States.

“The attendance is breaking records for that museum for an exhibition, but they’re all new, younger-generation people discovering his work,” he said, noting that visitors included fashion and architecture students, among others.

“African-American visitors were saying, ‘Oh my god, I didn’t know he was the first designer to have a black model go down the runway in Paris.’ For them, it was something extraordinary. So it’s on all these different levels that people can discover or rediscover his work,” Cox explained.

The museum in Marrakech, set to open to the public on Oct. 19, will stretch over 43,000 square feet, including a permanent exhibition space showcasing Saint Laurent’s work, a temporary exhibition area, a research library, a store, a café with an outdoor terrace and a 150-seat auditorium that can host talks, concerts and film screenings.

“It’s obviously an Yves Saint Laurent Museum, but more than that, it’s a cultural center,” said Dahlström. “We want it to be a lively place and we have set up facilities that will allow us to host a dynamic program of events.”

The museum will kick off its cycle of temporary exhibitions with “The Morocco of Jacques Majorelle,” set to run from Oct. 19 to Feb. 6, 2018, featuring some 30 works by the painter. It will also present images shot by photographer André Rau in Marrakech in 1992 to mark the 30th anniversary of the couture house.

The building is designed to blend into its surroundings, with textured bricks that recall both fabric structures and the colors of the city. Though Studio KO has designed trendy venues like Chiltern Firehouse in London, designer Karl Fournier said he and his partner Olivier Marty were surprised to be chosen for the project.

“I’m going to interrupt Karl right away because naturally, I had dreamed of big international architects. I said to myself, why the hell should I bother with that?” interjected Bergé, prompting laughter from the audience.

The Paris museum is located at 5 Avenue Marceau, formerly home to Saint Laurent’s couture house and now the headquarters of the Fondation Pierre Bergé-Yves Saint Laurent. Visitors will be able to visit the former couture salons and Saint Laurent’s design studio for the first time.

The renovation is headed by stage designer Nathalie Crinière and interior designer Jacques Grange, who have worked on a number of the foundation’s art exhibitions since it opened in 2004. The exhibition space will be doubled in size and refurbished in the style of Saint Laurent’s original couture house.

Samuel said one room would be dedicated to showing the full development of a single collection, starting with Saint Laurent’s debut season under his own label in 1962 and changing every 12 months. “Every year, in rotation, people will come to see the new Yves Saint Laurent collection,” she said.

The museum’s opening on Oct. 3, during Paris Fashion Week, will coincide with the publication of several books and the screening of a documentary by Loïc Prigent on Franco-German network Arte on Oct. 1. The venue will host thematic exhibitions once a year, starting in October 2018 with “Asia Imagined by Yves Saint Laurent.”

Flaviano said the house had staged around 20 shows worldwide since 1983, when Saint Laurent became the first living designer to be honored with a retrospective at the Metropolitan Museum of Art. It is in talks with institutions in Japan, Australia and South Korea to organize exhibitions between 2019 and 2021, he added.

In closing, Bergé paid homage to Hector Pascual, the Argentine set and costume designer who was Saint Laurent’s assistant for a decade before being made custodian of the house’s archives from 1981 until the designer’s death in 2008.

“Hector Pascual kept what he could in a cellar,” said Bergé. “I remember in 1983, poor Diana Vreeland was sitting on a trunk, and that was how she did that exhibition at the Met. I imagine his joy if he were here today.”