The 110-piece exhibit at the Seattle Art Museum includes the designer's paper dolls and collection boards from his 40-year career. 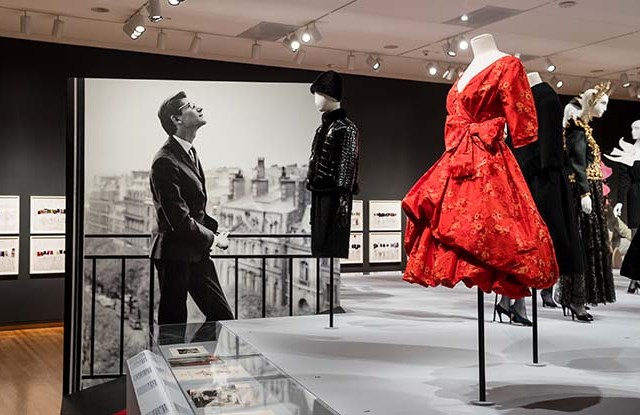 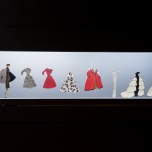 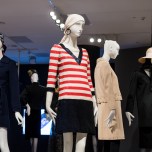 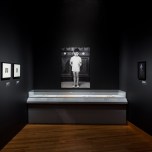 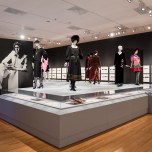 SEATTLE — From the day in 1957 that 21-year-old Yves Saint Laurent succeeded the late Christian Dior, his life has been the subject of as much fascination as his legendary designs.

This week, “Yves Saint Laurent: The Perfection of Style” opens at the Seattle Art Museum to reveal an in-depth look at aspects of the designer’s life that contributed to some of his iconic moments. At a time when the appetite for behind-the-scenes images and tell-all reality shows has become boundless, it’s fitting that there would be renewed interest in a man who was a pop-culture figure during the Sixties zeitgeist.

“The first fascination is the dresses — the Mondrian or the tuxedo, and that is the first image that [people] have in their mind,” said exhibit curator Florence Muller, who is Denver Art Museum’s Avenir Foundation Curator of Textile Art and who has worked on a number of exhibitions featuring the designer. But, she said, people want to discover the man behind the creation. “The exhibition gives this perspective. It’s something more intimate.”

The show starts with a Stateside first: Paper dolls created by a teenage Saint Laurent in the Fifties made out of magazine cutouts and cardboard — a dress rehearsal of sorts for the 40-year career that followed.

The following room displays an astoundingly comprehensive look at the collection boards for every collection from 1962 to 2002 — the year he retired — in addition to photographs, books and other significant documents from his life drawn from the archives of the Fondation Pierre Bergé – Yves Saint Laurent.

There is also a room of hand-sewn muslins and hats that were a first draft for some of his iconic garments. And the well-known pieces are all there among the 110 ensembles: An evening dress from his 1958 Trapeze collection for Dior, the 1962 peacoat, the first of many tuxedos, the safari jacket, the jumpsuit and, of course, the 1965 Mondrian, shown alongside art from Pop artists that informed his work such as Roy Lichtenstein, Tom Wesselmann and Andy Warhol.

Muller said that although there were extravagant collections, wearability was one of his signatures. “Even in the evening gowns, you would have pockets, because a woman who is not a model, she needs to put her hands in the pockets and have an attitude,” Muller said. “You look cool and not ridiculous.”

The designer was one of the first to be recognized for taking inspiration from what is now known as “street style,” and for partying with friends and pop culture icons such as Andy Warhol and Catherine Deneuve — in fact, the designer became a bit of a pop-culture figure himself.

In a 1963 Newsweek article, WWD publisher John B. Fairchild — who championed Saint Laurent throughout his own career — said of the designer, “This guy is the only designer in Paris who really belongs to the Sixties because he’s part of the world around him and therefore understands it.”

One of Muller’s favorite parts of the exhibit is a dark room devoted entirely to costume jewelry, surrounding a black gown at the center. “It’s like a Christmas tree and very extravagant,” she said, noting the importance and creativity in costume jewelry for the designer.

In bringing the exhibit to the Seattle Art Museum, Chiyo Ishikawa, who is the museum’s deputy director of art and curator of European painting and sculpture, worked with the Fondation Pierre Bergé, which was formed in 2004 to conserve and promote Saint Laurent’s heritage two years after he retired and four years before the designer’s death.

Ishikawa said that she was encouraged to bring a fashion exhibit to Seattle after the popularity of a 2013 show on Japanese avante-garde fashion. “There’s a growing design community here,” she said. “We aren’t all fleece and rubber boots.”

Muller added that fashion exhibits in museums tend to be popular with a wide and diverse audience.

“Nobody is frightened by a fashion exhibition. If they don’t know everything about contemporary art, [they feel] they can’t enter.” But, she said, fashion is everywhere. “Everybody has to be dressed every day. Everyone has to think a little bit about what is a garment and why should I dress this way or that way.”

Saint Laurent was one of the first designers to bridge the gap between elite and approachable. In 1983, Diana Vreeland organized a retrospective of his work at New York’s Metropolitan Museum of Art, which was the first time a living couturier was the subject of a museum show.

The comprehensive organization of the archives (see, for example, the walls of fabric swatches that were saved to ensure color consistency) hint that Saint Laurent was aware of his destiny. An exhibition catalog published to coincide with the exhibit shares that at 9 years old, Saint Laurent told his family that “one day, my name will appear in lights on the Champs-Elysees.” At the exit of the exhibit, before a portrait of Saint Laurent by Andy Warhol, is his famous quote: “Fashion fades, style is eternal.”

Muller said that ultimately, she would like visitors to understand that fashion, at the time, “was really something very free. You can feel it — the joy — the ideals that are suddenly rising in the mind of the couturier without a notion of efficiency. Of course, it is efficient and it was so successful, but the efficiency of his style is more linked with the fact that he really had the feeling of what the woman wanted to find in the boutique and the haute couture. He was never too far away from the reality of a life of a woman.”

The Yves Saint Laurent exhibition will be at the Seattle Art Museum through January 8, after which it will travel to the Virginia Museum of Fine Arts from May 6 through Aug. 27, 2017.