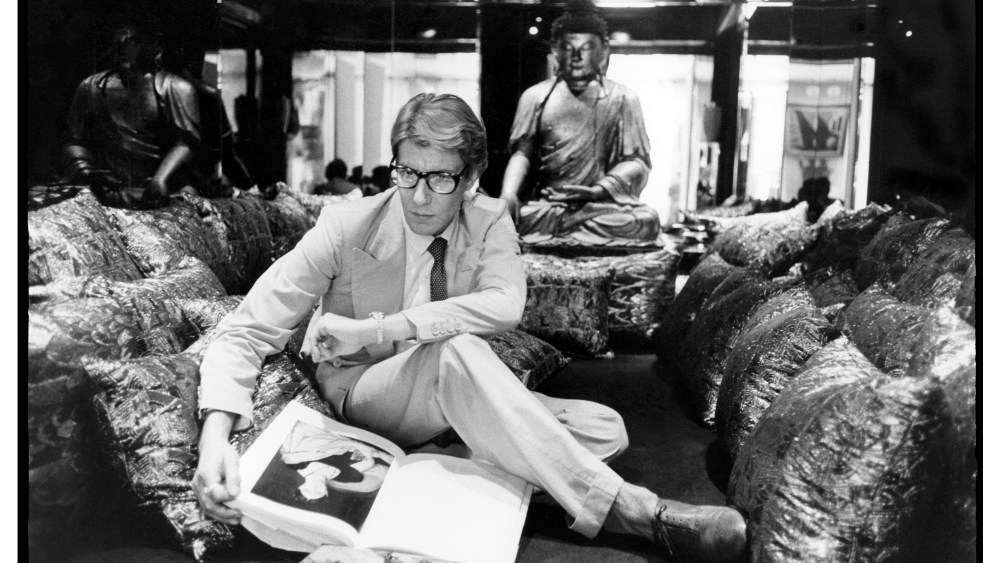 PARIS — The Yves Saint Laurent Museum here will open its first temporary exhibition on Oct. 2, a year after its opening. Entitled “Yves Saint Laurent: Dreams of the Orient, ” the showcase presents what is described as a dialog between the designer’s creations inspired by his “imaginary travels” through Asia and artifacts and traditional apparel from the region, on loan from private collectors and the Musée Guimet, which specializes in Asian art.

Asia was a recurring source of inspiration for Saint Laurent throughout his career, but he rarely traveled there, explained museum director Olivier Flaviano. He instead sourced his influences in art, literature, history, theater and cinema. “Asia had an extremely important place in Yves Saint Laurent’s work, it permeated his œuvre,” he explained at a press preview of the exhibition.

“His were stationary travels, through reference books, music, theater, the cinema,” he said. “His approach was not just esthetic, it was also cultural, artistic and sometimes political.”

The exhibition focuses on China, Japan and India in separate spaces.

His Chinese designs are juxtaposed with ceremonial and theatrical attire as well as ornaments like a lacquer box and a vase, showing how he used traditional motifs and symbolism to evoke, rather than imitate, his chosen themes, explained Aurélie Samuel, collections director of the museum and curator of the exhibition.

From India, courtly brocades, saris, jewelry and turbans from the 18th and 19th centuries are shown alongside the designs that they inspired, including turbans worn by women, a symbolic message of empowerment typical of many of Saint Laurent’s designs.

Japan, meanwhile – the only one of the three countries where Saint Laurent did travel extensively – his interpretations were more literal, according to Samuel, and inspired by traditional kimonos and Kabuki theater costumes.

One of the museum’s most exceptional pieces from its collection of around 7,000 – a 1988 embroidered jacket with iris motifs inspired by Van Gogh, himself inspired by the work of Hokusai – is displayed in this area.

Another space is dedicated to the fragrance Opium, revealing the creative process behind its conception – one wall is covered in Saint Laurent’s original sketches and notes for the bottle, press kit and New York launch event – and the strong links to the Samurai’s “inrô” that inspired the bottle, designed in collaboration with Pierre Dinand.

The jacket worn by Jerry Hall in the original ad campaign for the scent is also on show, as is an embroidered dress worn by Loulou de la Falaise to the launch.

In the salons at the entrance to the museum, visitors can discover photos of the late designer with artworks that inspired his work, campaign posters, sketches and photographs of models wearing his designs, giving an overall view of the importance of Asia to his work and setting the context for the exhibition.

“Yves Saint Laurent: Dreams of the Orient” runs until Jan. 27 next year. The museum plans to stage a temporary thematic exhibition through the winter each year in the future.