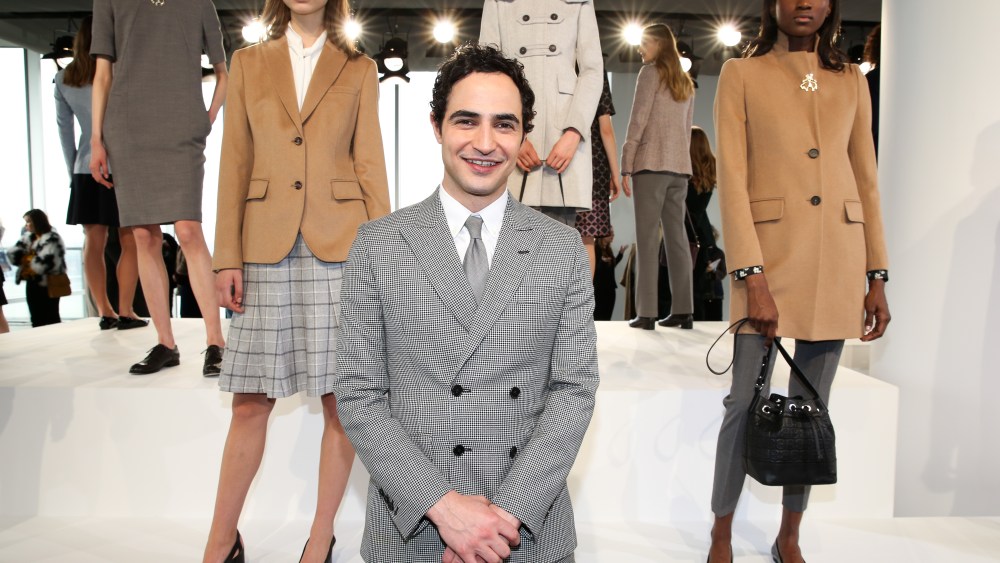 Brooks Brothers’ decision to hire Zac Posen as creative director of its women’s collections in 2014 raised a few eyebrows. What would “the oldest clothing retailer” in America, as the company bills itself — and one of the most conservative — want with a designer who built his reputation on high-octane red carpet dresses, done with anatomical seams, Old Hollywood flair and yards of silk faille? Was the country’s bastion of preppy, white-collar office attire considering eveningwear?

“I think that’s what fashion’s about, right?” said Posen of being a less than obvious choice for Brooks Brothers. “Fashion has to be about evolution and change. But I think it was very intuitive of Claudio Del Vecchio and Lou Amendola to bring me on to understand what I could bring to it.”

Obviously Posen’s hugely public profile was something to consider. From the time he launched his own collection in 2001 he was a star, a 24-year-old wunderkind designer whose proximity to famous childhood friends — Claire Danes, Lola Schnabel — and business partners like Sean “Diddy” Combs — put him in the pages of Vogue and the tabloids alike. Joining “Project Runway” as a judge in 2013 only enhanced his exposure.

But Brooks Bothers didn’t hire him solely as a marketing ruse. “This is our main women’s collection, and if I didn’t think he could deliver, I wouldn’t risk it,” the brand’s owner Claudio Del Vecchio told WWD at the time. “It’s not for p.r., but he’s a celebrity and I fully expect to get plenty of coverage and create traffic. But this is a business decision.”

Workwear was always Posen’s focus. He saw what needed fixing right away. “For me, the immediate kind of rolling up my shirt, literally, was to fix fit and construction,” Posen said. “I started with their core staples, in terms of suiting, and the blazer, and the shirting, and basically reworked through into production their fit and construction. But I started with the inner construction of their suit jackets, which I thought needed a serious update, and needed to feel more appropriate for today’s consumer.”

Asked what was missing, Posen didn’t miss a beat: “It was shapeless. It didn’t have a style point of view. It felt diluted. It felt derivative,” he said. And yet he didn’t give it an overhaul. He brought in key people to help the design team, including Yaz Bukey for accessories, Pierre Marie for prints and Christopher Niquet, Posen’s longtime partner, to style. The aesthetic is still all-American and classic, but silhouettes are slimmer, shapes are sharper. They implemented a focus on shirtdresses with nipped waists and full skirts in a variety of prints. There’s the perfect blazer with gold buttons. Suits with trim jackets and slim pants — and even skirts — bear the glint of Posen’s anatomical seaming in a subtle way. There’s tailored outerwear, twins sets and tweeds, all still steeped in tradition, but not stuffy.

Posen has never staged a runway show, opting for presentations the first few seasons and showing in the showroom lately. There have been moments of glam — some faux fur accents, a cowl neck velvet sheath, takes on the tuxedo — but nothing over-the-top. “When you go into a multi-multi-multimillion dollar machine of a company, first things first, you have to be very careful about how you fine turn something,” he said. He was careful not to overtly rock the boat, and admits some of his ideas were initially met with resistance. “A shocking idea? Making a woman’s brogue,” he recalled.

Posen’s has worked well within the Brooks Brothers established framework, so much so that the average customer might not even known he’s involved. His name isn’t on the label, although his role at the brand is part of his intro on “Project Runway.” “I made a very conscious decision that I didn’t think that was sensitive to the DNA of the brand,” he said of not putting his name on it. “I kind of think there’s something cool about the understated quality of it. I also think there should be trust about people’s discovery of something today. Everything is so forced that with a brand that doesn’t really play with strong themes, it’s your bread, it’s your butter, it’s your milk, it’s your flour. That’s kind of how I thought about it.”

When Del Vecchio called Posen about the job, the designer was already busy with three of his own collections — Zac Posen Collection, Zac by Zac Posen and Truly Zac Posen for David’s Bridal — not to mention “Project Runway.” In 2015, he also signed on with Delta Air Lines to design uniforms for its employees. He renewed his contract with Brooks Brothers a year ago.

What does Posen get out of it — besides a paycheck? He was drawn to the idea of working not only on an iconic brand, but a vertical operation that’s very different from his own business. He noted that he’s learned much about fair pricing in a global market, working on a collection that’s not designer but not fast fashion. “The experience of working with much more casual separates than the clothing in my own collection, I think that was part of the attraction, too,” he said.

Asked who the brand’s female customer is today, Posen said, “She is a professional woman, as most women work. I think in the past it definitely spoke to the counterpart of that idea of the working husband, or the business suit husband, but that’s just not the case anymore. The woman is wearing the suit or wearing the dress to work today. The woman is a poised woman. She’s definitely a dressed up, put together woman. It has the ability to connect to different age groups and generations. I really wanted to create a collection that crossed over mother/daughter, even grandmother. We didn’t want to lose our existing customer, we wanted to retain the existing customer and bring in a new generation.”

He seems to have done just that. At the time of Posen’s hire, Brooks Brothers’ women’s wear accounted for around 20 percent of the company’s $1.1 billion in annual sales. Posen noted that the collection grew by 40 percent over last year’s sales. As for the new customer, he witnessed her first hand a few weeks ago on a trip to Tokyo for the bicentennial. Brooks Brothers has always been big in Japan since establishing itself there in the Eighties.

“President Abe wears Brooks Brothers. All the politicians do,” Posen said. “It’s kind of like a rite of passage.”

Abe didn’t come to the meet and greet with Posen but many women of all ages did. “We broke a record in the store,” Posen said. “We had lots of professional women, lots of leisure women, lots of mother/daughter shopping, and then some much younger fans. Teenage girls, who I would say are Zac fans, who actually were new customers who we were able to bring and introduce into Brooks Brothers. And then lots of kids, like under five years old. They were like my youngest fans I’ve ever had.”