Bridget Foley’s Diary: Zac Posen — To Every Spring There Is a Season

Turn, turn, turn. The designer enlisted Steven Sebring to shoot 360-degrees of the glorious Winnie Harlow in his spring collection. 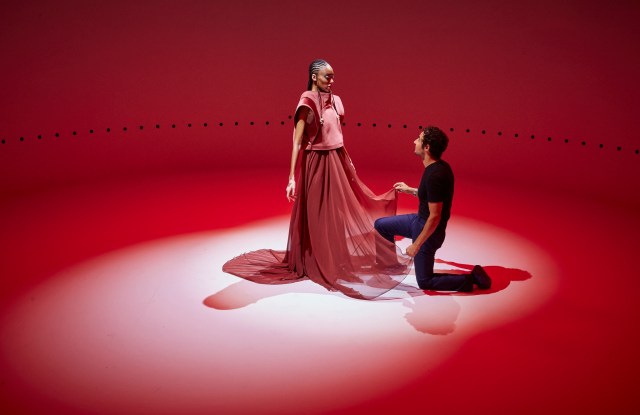 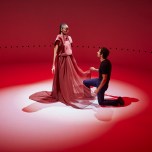 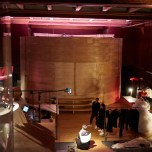 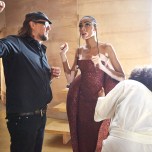 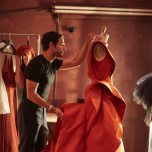 The model’s body language is gloriously seductive as she works a major-glamour gown that draws imprecise lines to both Swan-generation elegance and Eighties glitz. Her carriage has the gazelle-like grace of forebears who once populated the cabines of Halston and Yves Saint Laurent. But her hair, worked into intricate Fulani braids, and her complexion, unique among the known stars of her profession, radiate 21st–century distinction.

The model has just descended a stairway that leads to the photo studio’s main set, a vast white drum of a space with a huge sliding door now open, ready for her entrance. But the would-be haute aura of the moment never materializes thanks to Booby, the dog someone has brought to work for the day. He follows the model down the stairs, and before you can say “breathtaking,” she bends down to give him a “good dog” treat, and then goes full-on prone on the floor, leaning and contorting in serpentine correspondence with the happy pooch.

The scene speaks volumes about the girl, Winnie Harlow; the dress, a sculpted column in flocked glitter tulle over russet duchesse, and, perhaps most significantly, the designer, the unflappable Zac Posen. If his stomach churns at the sight of Winnie in the dress on the floor with the dog — pre-shoot — he gives no clue, at least pretending to enjoy the tableau along with everyone else. “A structured gown like that — I didn’t know it could do that,” he offers of its gymnastic flexibility. “But I’m happy it can.”

The occasion is Posen’s Spring 2020 shoot. Several seasons ago, he eschewed the formal runway, preferring to experiment with various approaches to photography. All in on high-tech this season, he engaged photographer Steven Sebring, who had spent the last several years developing 3-D methods.

Today is the second of a two-day shoot. In advance of WWD’s visit, Zac Posen’s head of global communications and marketing, Celine Maritone, e-mailed a photo from the day before in which Winnie wears a shoulder-to-thigh froth of pink and white tulle. One click and, voilà! Thanks to Sebring’s tech magic, she rotates, a jewelry-box ballerina come to life. Today, a bigger tulle froth stands on a mannequin, an off-beat, out-to-there, corseted princess gown cut with beautiful (if highly editorial) asymmetry. While at first glance in the dark studio its color shifts appear to be the result of natural shadows, in fact, they’re different shades of tulle, deftly placed — white, ivory and a mesmerizing blue-lavender dubbed “heliotrope” by Sarah Jessica Parker during a recent studio drop-by.

Both are fairy tale wonders, and completely different from the high-hauteur gown Harlow now wears, She’s excited for all of it. “It makes me feel gorgeous,” she says of Posen’s lavish eveningwear. “I am either in sweats or I’m in a gown…Being in a gown is like nothing [else] you can ever experience other than being in a gown. I feel like a princess, I feel like going to a ball. It’s just magical.”

Posen’s desire to show extreme variation in a single collection is one reason he left the formal runway; most fashion shows today feature finely honed visual continuity. Yet when it comes to big-event dressing and big-event price tags, the customer demands individuality of a sort antithetical to a one-note show concept. That doesn’t mean he comes at his collections as a series of extravagant individual looks; there’s always an underlying current. This one offers a study of the play of structure and fluidity and marks the first time Posen has aggressively mined his own archive for inspiration. Other of the season’s inspirations: trips to Asia and the Noguchi Museum in Long Island City and the ballet, but not only in the obvious context suggested by those tulle creations.

For the first time, Posen designed the collection partly on an iPad, using the program Procreate; until now, he’d been resolutely a hands-on, draping kind of guy. Then came an assignment for the New York City Ballet — he and Anna Sui are this year’s designers for the Ballet’s Fashion Gala in the fall; Posen, for a work choreographed by Lauren Lovette. As he started mulling that process, he asked to see and perhaps rework some archival pieces, original designs that famed costumer Barbara Karinska did for George Balanchine. But, out of respect for their age and importance, he didn’t want to tinker too much. Instead, he says, “I took the leap of faith to start working on an iPad where I could manipulate imagery, add imagery, torque it, distort it.”

One thing led to another, and Posen decided to employ the technology for his ready-to-wear as well, especially interesting given the archival beginnings of some of the looks. “That was the starting place — taking detailed shots of different gowns of ours and just taking elements [from them], scaling them up, changing, starting from one place and building these sculptural shapes.” (As for those major tulle moments, he couldn’t resist, following a perusal of a book on the stuff supplied by Marc Happel, the ballet company’s director of costumes. Posen, who “thought I knew tulle,” had his head turned by the dance world’s ”multitude of different densities of tulles, transparencies, different kind of nets. We started finding new qualities that had new bounce, new dimension, many more beautiful colors. Amazing tulle.”)

Working on the iPad allowed for all kinds of manipulations of silhouette, some of which couldn’t be realized in the transition from tablet to real dress. Nor could the design process fully escape old-school methods. “There had to be the hand and the texture of the studio and of our [usual] process,” Posen says, creating a fusion of tech and tradition that proved challenging at times. “How to interpret these nuanced shapes of form and really figure out the inner architecture and technique and artisanal element of it? At first you get worried — is it going to look too sci-fi or tech? But I just knew that the human hand and the human brain would add that other level of nuance to it.”

Nuance indeed. The collection is large and diverse, the dialogue between structure and fluidity played out from one dress to the next and, often, in a single look. An array of stately ball gowns and structured columns with bold appendages are all about precision silhouette while a deep teal chiffon-and-crepe Empire gown with an intricately worked bodice is all about romantic ease. On their own, a series of layered chiffon dresses project a boho goddess vibe, but turn superheroine chic under armor-like, short tops.

While Posen is known for such major evening statements, in recent seasons he has focused as well on daywear, creating “a balance of very wow pieces to very casual pieces because that’s the extreme that fashion is going today,” he says. Here, his day offerings range from a new take  on the airy white cotton dresses that are becoming a brand signature to a men’s wear inspired group, such as a tailored tropical wool jacket with attached, bias-cut crepe skirt over pants, based on a pair he did for himself at Brooks Brothers. Dressed in the latter, Winnie starts dancing on set, her attitude an impromptu, accidental tribute to Bob Fosse.

None of her exquisite body language will be lost in the pictures. Each season, Posen pours a great deal of energy into how the clothes will be shot, Here, he explains, “because we were working with such sculptural forms and playing with fluidity, I needed a new way to tell that story.” Enter Sebring, who has been perfecting his 360-degree approach for some time. His studio centers on a circular set within which more than 100 cameras capture the subject, here Harlow, whether standing still or in motion. It’s not about tech for tech’s sake. “I use technology to create art. I don’t let technology rule my art,” Sebring says. “I built it for archiving purposes and being able to capture reality, pure reality in the moment, and emotional moments.”

Once Harlow enters the drum, its big sliding door is closed. Sebring communicates via a mic and headphones while watching her on a screen visible to all in the room, a woman alone and sequestered, yet in plain view.  An uncomfortable feeling for the person with invisible eyes on her? Not according to Harlow.

“I’ve never done anything like this before, but it’s not weird,” she says. “I am used to being on set with so many people, always stepping in, touching this, doing this, so it’s really nice to be on set and kind of just be in my own vibe, and especially with the movement [required], I get to be free…From start to finish when I’m in here, everything is caught and it’s perfect.”

Posen chose Harlow for her modernist versatility. His vision required “an incredible model” who could “bring this clothing to life…and represent all the different characters, the strength of the Zac Posen woman, the femininity of her, the humor, and that was Winnie.”

For Harlow, the mental prep to play multiple characters is pretty easy. “I prepare by trying to get sleep, especially for a shoot like this where it’s so much about energy and bringing personality to set,” she says, noting that this is her first job after a vacation in Miami and Jamaica, where she’s from and which inspires her attitude on set. “I can hear feedback in here while I’m moving and dancing and vibing,” she says. “One of the things that keeps getting called out to me is like, ‘we want to see that Caribbean vibe, we want to see that Jamaican vibe.’ So I try to include that in a model-esque way.”

Posen, too, is all in on taking advantage of the possibilities inherent of the 360 photography to fully express the clothes. And when every angle is under scrutiny, happenstance plays a role. “There are certain things you can’t control,” he acknowledges. “[The process] really highlights the magic of the person because the clothing comes to life through movement of human form, so it takes on its own character.” It’s here where the designer must cede control to the woman wearing the dress, which is what fashion should be about in the first place. “As much as you want to control or create that look, fluidity and movement, personality, character, every reference that has made Winnie who she is [is exposed] and is able to be captured.”

As for how the 360 pictures will be used, “I think this will live on social media and on Winnie’s and Steven’s,” Posen says, adding that they will provide an important tool for customers as they shop or browse online.

The experience has only whetted Posen’s appetite to further delve into technology. He’s already worked with 3-D printing for the dresses that numerous celebrities, including Katie Holmes and Jourdan Dunn, wore to the Met Gala in May, and he expects to keep experimenting. “I always love bringing technology and human craft together,” he notes. “Our clothing sometimes has a real traditional quality to it, and I think it’s interesting when the two fuse together. Without one another, the future is going to be pretty bleak. So we really have to embrace how the two coexist.”

Bridget Foley’s Diary: Girl Power in the Canyon of Heroes